By any name, a constitutional amendment that would curtail the dwindling strength of unions was officially introduced this morning by Republican legislators. 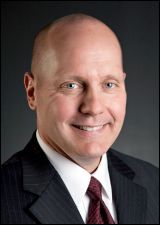 The big question is whether the proposal will make it to the floors of the Minnesota House and Senate. Presumably, that will depend on whether Republican legislative leadership is willing to — or even wants to — block what will surely be an explosive issue if it advances that far.

As promised earlier in the session, Sen. Dave Thompson, R-Lakeville, and Rep. Steve Drazkowski, R-Mazeppa, this morning introduced the measure at a media event.

“Speaker Zellers keeps saying they [Republicans] aren’t interested in governing by constitutional amendments,” Thissen said. “But members keep coming out with them.”

To date, Zellers has not take a public position on his feelings about what Republicans now call the “Employee Freedom” amendment (it used to be known as “Right to Work”), he’s only said that his caucus is not top-down, but member-driven.

Senate Majority Leader Dave Senjem also has been silent on the issue.

But chances that the proposed amendment would move through committees and to the Senate floor seem more possible than in the past, given the presence of Sen. Dave Hann at this morning’s roll-out.

Hann came very close to defeating Senjem in their contest to succeed Amy Koch as Senate majority leader, and he seems to hold considerable sway among the most conservative elements of the caucus.

Although there are murmurs that a number of Republican legislators are “lukewarm” about the proposal, none has spoken out publicly against it.

Thissen and Sens. Dave Tomassoni and Ken Kelash all said that if the amendment gets to the floor, it could well end up on the ballot in November.  (Remember, under the Minnesota Constitution, amendments do not go through the executive branch, meaning Gov. Mark Dayton would have no opportunity to veto the effort, as he surely would.)

As 20 Republican legislators nodded approvingly, Thompson and Drazkowski said this was “a pro-jobs bill” that would “create an infusion of capital investment” into Minnesota.

Drazkowski,citing outlier data that was presented by a study sponsored by the conservative American Center for the American Experiment, said worker wages and benefits would improve with passage of the amendment, which prohibits unions from requiring people to pay dues or join unions in what are currently union shops.

The number of those union shops, by the way, has decreased dramatically over the years.  Fewer than 10 percent of workers in the private work force are union members. Adding public employee union members, about 16 percent of the Minnesota workforce is unionized.

Union leaders disputed claims that Minnesota workers would benefit economically from passage of the amendment.

Citing data from the U.S. Bureau of Labor Statistics and the U.S. Census Bureau, the AFL-CIO offered these numbers:

• 9.6 per cent of Minnesotans do not have health insurance, compared with 16.6 percent in right-to-work states.

• In Minnesota, 91.6 percent of adults have a high school diploma, and 31.5 percent have a college degree. In right-to-work states, the comparable figures are 81.5 percent and 21.4 percent, respectively.

Drazkowski disputes those numbers, saying they reflect gaps from another era. Currently, he said, wages in right-to-work states are rising at a faster rate than they are in Minnesota.

Thompson stressed the “liberty” aspect of the proposed amendment.

The constitution, he said, should provide the structure of government and “it should provide economic liberty.  … We are not going crazy with amendments here.”

Neither Drazkowski nor Thompson would say there is unanimous support among Republican legislators for the amendment.

Thissen, Tomassoni and Kelash, meanwhile, said DFLers would be unified in their opposition.

But the Republicans supporting the amendment seemed to agree with the notion that even unions would benefit from passage of the amendment.

“Union organizations will work even harder for their members,” Drazkowski predicted as Hann nodded his head in agreement.

Although the language of the amendment is pretty simple, it is accompanied by much-longer fine print showing exactly what the amendment would do.

None of the Republicans seemed to know what the immediate impact on union-company contracts would be. Federal law requires that in largely union shops, workers who are not members of the union receive union protections.

One  aside at this morning’s event. Many of the reporters from newspapers and television stations reporting the event are union members.

(Disclaimer: Although MinnPost is non-union, I was previously a union officer while employed by the Star Tribune.)

Right-to-work amendment starts legislative journey, but how far will it go?