The happy talk about the state budget continued when Minnesota Management and Budget Commissioner James Schowalter presented the latest forecast. For the third time, revenues are coming in ahead of expenditures — this time by $323 million.

“That’s clearly good news,” says Jay Kiedrowski, a senior fellow at the Humphrey School of Public Affairs and former Minnesota finance commissioner. But, he warns, no one should get the idea that les bons temps are about to rouler. “The public may think there’s more money to spend, but there isn’t.”

One reason: Those dollars are already spoken for. Some $5 million will go to top off the state’s rainy-day fund; the rest — $318 million — must, by law, be used to reduce so-called school-aid shifts which were enacted in previous legislative sessions. (Such measures allowed the state to delay paying portions of allocations due to local school districts.) Minnesota owes them some $2.7 billion, and the budget surplus will reduce that total 11 percent.

“The surplus does not stick around long,” said Schowalter during a presentation Wednesday. “We started with zero, and we’ll end with zero.”

Still, a surplus is a surplus, and as they pronounced their reactions to reporters, officials looked, if not thrilled, at least relieved that this legislative session would not have them battling over a yawning budget gap.

Republican leaders were quick to claim credit for the modest improvement. “This is great news for Minnesota,” said Senate Majority leader David Senjem of Rochester). “It affirms that the Republican plan is working.”

Gov. Mark Dayton, trooping in on their heels, somewhat grudgingly agreed that a surplus was a good thing but complained that if Republicans had passed his tax on million-dollar-earners last year, the surplus would be $1 billion higher.

On his heels came House Democratic Minority Leader Paul Thissen of Minneapolis, who groused that it was only Republicans’ willingness “to borrow and steal from our kids,” (use delayed payments to schools) that created the extra money. He wondered aloud “what would have happened had we’d made more responsible choices.”

The experts — Schowalter and state economist Tom Stinson — pointed to technical changes to explain the surplus. For starters, Minnesota’s economy is doing much better than the nation’s as a whole. Our unemployment rate is 5.7 percent, about 2.8 percent below the national average. That’s better than the historical 1.4 percent differential. The state’s workforce is only 0.7 percent smaller than it was at start of the recession in 2007, compared to 3.7 percent nationwide. 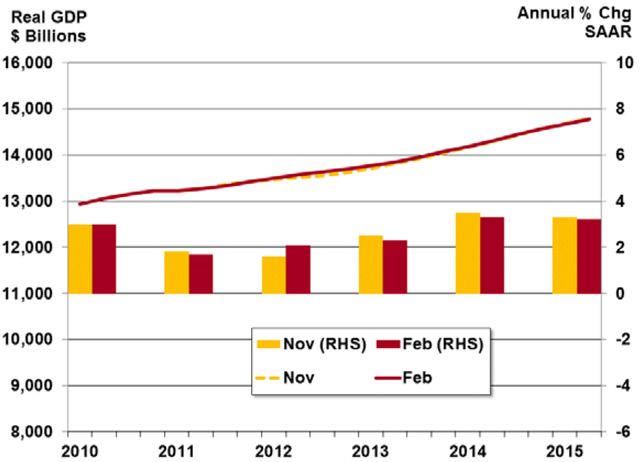 There has been little change in Global Insight’s forecast for real GDP growth in 2012 and 2013.

But those improvements in the economy produced only  a small increase in revenues, about $93 million. That may sound like a lot of dough but comprises just 0.3 percent of the state’s levies. Corporate tax revenues dropped by 1.4 percent.

A far larger portion of the surplus, about $230 million, arose from savings, that is, money not spent. School enrollment was lower than expected, generating $30 million in savings. And a whopping 80 percent of the surplus is a $180 million in savings on Health and Human Services programs. The largest bulk of that — $108 million — was due to two factors: lower than expected enrollment in an expanded Medical Assistance program for adults without children and lower costs from bidding out some health-care services to UCare and Health Partners.

A mean-spirited observer could say that most of the savings came from, well, mistakes in estimating budget expenditures.

And looking at the budget with an even colder eye illuminates huge, looming problems. Kiedrowski points out that Minnesota has done little to correct what economists call “structural imbalance.”

Translation:  The state spends more than it takes in or, conversely, doesn’t earn enough in taxes and fees to cover what it spends. Over the years, the Legislature and governor used one-time fixes to close budget gaps instead of making cuts or raising taxes. Last year, for example, in addition to borrowing from schools, the government took out loans against the revenues anticipated from tobacco companies, which Kiedrowski characterizes as “one of the worst financial decisions in Minnesota history.” 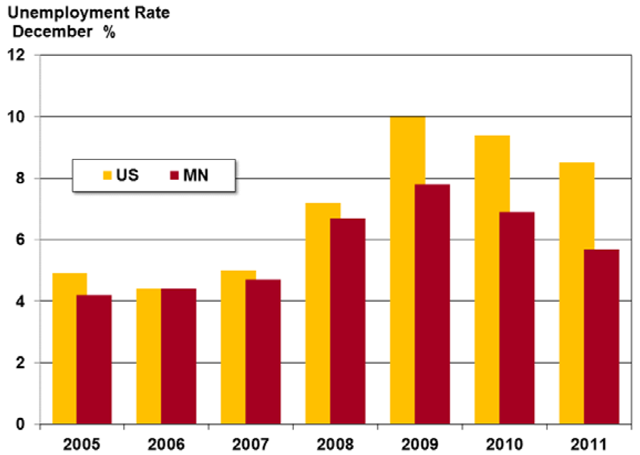 Minnesota Management and BudgetMinnesota’s unemployment rate was well below the national rate at the end of 2011.

Such maneuvers can’t go on forever. To put it in personal terms, if you borrow from next year’s salary to pay for this year’s expenses, you’ll have to somehow make up for the lost funds in the following year, either by spending a whole lot less or by taking another loan from MasterCard or Visa and burden you with interest payments.And so it will go for Minnesota. When the next 2014-2015 budget period rolls around, the state will be looking at a $1.1 billion budget shortfall, according to Management & Budget. That’s not counting another $1 billion for inflation. Toss in the $2.4 billion still owed to schools, and, well, we’re in a $4.5 billion ditch.

Even more nerve-wrackingingly, Stinson pointed to factors that could throw a wrench into the fragile workings of economic recovery: a possible conflict with Iran, which could raise gas prices to the sky and damage consumer confidence, the spread of the European sovereign debt crisis, possible cuts in federal spending, new tax hikes, and the implementation of the Affordable Care Act which will create changes that, according to Management and Budget, “will not be predictable using existing statistical models.”

Those are, as former Defense Secretary Donald Rumsfeld would have said, “the known unknowns.” Some unknown unknown, or several of them, could turn the budget picture even bleaker.

Dayton cautioned legislators against their natural inclination to use budgetary wiggle room to create programs or confer tax breaks on constituents. Any new spending “would have to be offset by cuts,” he said.

But he himself has proposed floating about $775 million in bonds to build roads and other public works to boost job growth, and he didn’t mention what budget cuts he had in mind to pay for the interest charges the state would incur. And Republicans plan to propose a repeal of the state’s business property tax, which they say inhibits job creation. That would cost hundreds of millions, and they also failed to mention what would come out of the state’s hide to pay for it.