A new Viking stadium has over the past year or so replaced The Weather as a topic of obsessive conversation among Minnesotans. Where will it go, who will pay for it and why should we bother when they can barely win a game have been questions asked at bars, coffee shops and parties, and over breakfast tables and water coolers across the state.

I have a personal interest, since my home is only two blocks from the Metrodome. And although I don’t love football, I wouldn’t be happy seeing a giant hole in the ground when I pull up the blinds each morning. And losing a major league team, would kind of reduce the Twin Cities to a secondary market. On the other hand, I wouldn’t be thrilled to see taxpayers (including me) shouldering a huge financial burden when the economy is still scraping by.

So it was with some trepidation that I elbowed my way past throngs into the governor’s press briefing this morning.

Gathered under the TV lights were Zygi Wilf, the team’s mustachioed owner, the Gov, of course, Mayor R.T. Rybak, Ted Mondale, head of the Metropolitan Sports Facilities Commission, and assorted business, legislative and union leaders, all of them endorsing a deal for a new “People’s Stadium,” which they had worked out behind closed doors. Supposedly the $975 million project will require no sacrifices or pain from anybody. Hmmm.

To answer the first question: the new stadium (yes, it will have a dome or a roof, at least and a “game-day plaza”) will sit to the east of the old structure. Placing it there will save taxpayers about $500 million on transportation improvements that would have been necessary had the Vikes moved to Arden Hills. All roads and light rail already lead to the Metrodome. 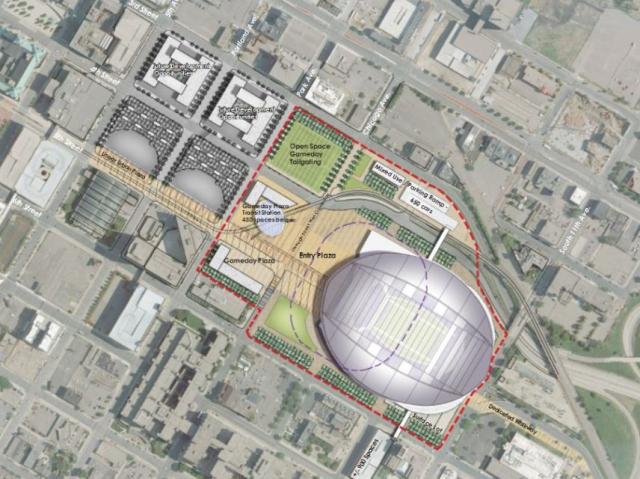 If everything goes according to plan, the team would be able to continue playing in the Metrodome during construction except for one season, when it will go to TCF Field. So, although I would be living with construction noise and dust for the three years or so that construction will take, my view will ultimately be safe.

As a further plus, I would be able to savor the enjoyable sight of thousands of workers building the thing, enriching themselves and the economy. According to stadium backers, the project will support 13,000 jobs and pay $300 million in wages for construction workers who now have a 20 percent unemployment rate.

The question of payment

That’s all well and good, but who’s gonna pay?

Well, here’s how the deal-makers say it shakes out:

The state will dredge up $398 million in taxes from charitable electronic pull-tabs. Currently, charities market paper pull-tabs to raise money, and about half of their revenues, some $37 million, go for taxes, which of course, charities aren’t happy about. They believe adding electronic pull-tabs would draw greater numbers of participants.

Minnesota Management and Budget estimates that the state’s take would total about $72 million annually (though today the governor said $98 million), with maybe half of that apportioned to stadium expenses. To raise the upfront cash, the state will float nearly $550 million in appropriation bonds. Pull-tab revenues and $150 million from the City of Minneapolis convention sales and hospitality taxes will go to repay the bonds.

Of course, that $550 million does not include financing costs. So, while Gov. Mark Dayton crowed that the stadium deal would not use any general fund dollars—the money that normally goes to fund nursing homes, schools and the like — taxpayers will be on the hook for interest payments.

About half of the dough will come from the Vikings themselves. Reporters clamored to learn who’s supplying it, but neither Wilf nor any of his amanuenses would say. “Private sources,” they all intoned. Maybe the Vikings have a Super PAC.

Meanwhile, in addition to the cost of construction, there’s another $516 million of operating expenses for the 30 years of the stadium’s useful life. Erecting a new building is a lot like buying a car. It’s not the purchase that kills you but the expense of ownership. The state won’t be on the hook for any of that, but Minneapolis has promised $189 million.

Where that would come from was a bit murky. The deal-makers have high hopes that the new stadium will attract a professional soccer team, NCAA finals and even the Super Bowl to cover some expenses. A separate bill would retire Target Center debt; without it, said Mayor Rybak, the Vikings deal couldn’t go forward.

Whether any of it will go forward is an open question. Few state legislators are eager to vote in favor of a controversial project in an election year. Especially when anti-government fervor is gripping taxpayers. And especially with the Vikings’ less than impressive record on the field. And the Minneapolis City Council has shown no willingness to take up the project either.

Whose approval would need to occur first to make the whole thing viable? “The chicken and the egg have to come at the same time,” said Rybak.

And if the deal doesn’t get done? Nobody threatened to relocate the team in Los Angeles, Azerbaijan or anywhere else. For his part, Dayton said he would keep working on it.

How the stadium deal shakes out