MOSCOW – There was only one thing unexpected in the staging of the Russian presidential election and Vladimir Putin’s victory on Sunday. It was not the squadrons of riot police spread across the city or the evidence of clumsily executed voter fraud and ballot stuffing. It was a tear in the eye of the victor.

Toward 10 p.m., at a victory rally in the Manezh Square in the shadow of the Kremlin, Putin shed a tear or two as he addressed the crowd of his supporters. The press immediately saw a hint of a genuine emotion, a crack in the indomitable Putin’s armor. I thought of a few lines from Shakespeare about crocodile tears.

The tears were out of character for Putin, whose arrogance in the presidential campaign has come off as hubris on steroids. He made a point, as he has in past elections, of campaigning by not campaigning. He never participated in the candidates’ debates. The televised debates showed his rivals as backbiting fools while the regular television news showed a thoughtful and serious Putin tending to the affairs of state.

Often, Putin appeared to be campaigning against the United States – obliquely referred to as “another country.” The Americans were funneling money into the opposition to turn the Russian election into a re-run of the Ukrainian Revolution of 2004 which Putin, true to his KGB roots, still insists was a coup orchestrated by the U.S. and NATO. From the rhetoric of Putin’s allies and surrogates you would have inferred that Putin was more engaged in a campaign against the American ambassador to Moscow, Michael McFaul, than against the candidates for president.

In the final weeks leading up to the vote, Putin lumped all his opponents into the broad category of “the opposition.” It was a puppet of Washington; it would deliberately falsify votes and present these as evidence for a repudiation of the election; and, finally, it might “sacrifice” or assassinate one of its own candidates to create a backlash against the government and the elections.

The Putin campaign ended on the Friday before the election with a three-hour press conference that received generous coverage from the television news and with Putin’s invitation to the press corps to come along as he took the night off to relax and play hockey.

In other words, when not preoccupied with the affairs of state, Putin was just a regular Russian guy or, as implied in a pro-Putin YouTube video, quite the guy. The pro-Putin forces put out a YouTube video that took Putin’s sexy-macho image to new lows.

It reached out to young, first-time voters. Yet the subtext appeared to be about something other than voting. A young Russian woman seeks help from a gypsy fortune teller for guidance on whom she should select for the “first time.” Of course, she wants her choice for the “first time” to be out of “love.” Looking at her cards, the fortune teller says the young woman’s destiny is already decided and points to a Tarot card of Putin. The next scene shows the young woman entering a polling station, presumably voting for Putin, and fades into a Putin ad that shows his face and the slogan “Putin – the first time only for love.”

Putin had little to fear from his rival candidates. The nationalist Vladimir Zhirinovsky had run for the presidency and lost four times. The communist Gennady Zyuganov had run and lost three times. Sergei Mironov, who heads up a bland made-in-the-Kremlin liberal party ran in the presidential campaign of 2004 on a platform that endorsed Putin. The new face, the billionaire industrialist and owner of the New Jersey Nets, Mikhail Prokhorov, was a fifth column for Putin and Co.

‘They are clowns paid to give legitimacy …’

No one took Putin’s electoral rivals seriously. “They are not an opposition,” says Boris Kargarlitsky, a longtime political voice on the left and director of the institute of globalization and social movements. “They are clowns paid to give legitimacy to a sham election.”

We spoke on election day. His mind, however, was concentrated not on the election but on the protests to follow. Kargarlitsky describes a Kremlin regime that has collapsed. It is, in fact, no longer a coherent regime but a configuration of “warring factions within the government.”

He gives Putin little time. “Within 10 months,” he believes, “we will have a dramatically different country because the point of no return has been crossed.”

On the day before the election and on election day, Putin’s tactics divulged that his real challenge lay not in the March 4 election but in what lies ahead. On Saturday morning, more and more squadrons of police and special forces patrolled the parks, squares and metro stations. By early afternoon on Sunday, I counted 15 truckloads of special riot police parked along Pushkin Square, where opposition groups had planned to hold demonstrations late Sunday and Monday. 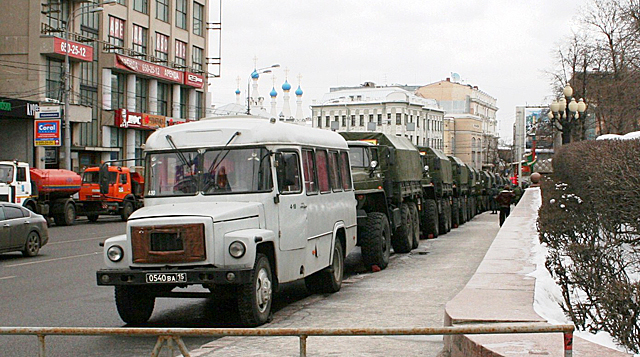 By mid-evening, the streets adjacent to the square were crammed with city trucks, with  snowplows, water trucks and other heavy-duty vehicles completely blocking the streets. In case demonstrators missed the message conveyed by the presence of the riot police, the trucks made it clear that it would be impossible to march in the streets. Trucks with water cannons stood by to discourage any protester from setting up tents or an encampment as Ukrainian protesters had done in Kiev in 2004.

Putin is relying on old tactics to control the streets. He has already either surrendered the fight for the new political space or simply doesn’t know it exists. Putin and his cronies at first dismissed the Internet and social media. By the time they maladroitly ventured into the Twitter and YouTube world, the opposition enjoyed a clear advantage. On Twitter, the 30-something Alexey Navalny (@navalny), who has a Twitter following in excess of 200,000, has moved his campaign against state corruption to rallying the opposition to demonstrate tonight at Lubyanka Square , the headquarters of the FSB (aka KGB). They plan to march to the Kremlin and set up a permanent encampment. Visit his web page for web- cam coverage of how the authorities yesterday organized “carousel” voting – the busing of voters from one polling station to the next.

Putin has even lost the support of his goddaughter, the daughter of his former St. Petersburg boss and the city mayor Anatoly Sobchak. Kseniya Sobchak has joined the ranks of the opposition and chides Putin on Twitter, YouTube and her blog. You might say she’s just a Russian Paris Hilton, but that’s the point. Putin’s critics include the Russian Paris Hilton.

A popular YouTube video reaches out to a younger demographic who could appreciate the message and dark humor behind its portrait of Putin as Homer Simpson’s nefarious boss, Mr. Burns. In two minutes, Putin/Burns tells the tale of his 12 years in power. The final image shows the Putin/Burns character as an Egyptian mummy on life support, suggesting that Putin does not intend to give up power anytime soon. Nobody thinks Putin is amused.

Early today, the morning after the election, Putin’s tears were under spin control. Putin told the press this morning that a cold wind had caused his eyes to tear up. I can confirm that a sharp and cold wind cut across Moscow last night. And besides, KGB men don’t cry.

Only one surprise in Russian election: Putin’s tears