Despite Monday’s progress, there’s very little buzz at the Capitol about the possibility of state legislators actually passing a Vikings stadium bill this session.

Even after the announcement of long-sought support from a majority of the Minneapolis City Council, there’s little evidence of much desire among legislators to take on this sticky issue yet this session.

Steve Sviggum, communications director for the Senate’s Republican caucus, said the Minneapolis endorsement offers “a little shot in the arm’’ for a stadium bill’s prospects.

But the emphasis is on the word “little.”

“It’s breathing again,” said Sviggum of the stadium.  “But only slightly.”

Scandal, charitable gambling, the calendar, pending elections, political will and collegiality all appear to be working against this deal.

Republicans in the House and Senate are having a hard time working together on anything. They don’t even seem to be able to agree on when they should try to wrap up this session.

Given all the scandal-related headaches this session has created for them, Senate Republicans would like to finish up their business promptly and leave the Capitol by next week.

“If everything breaks right,” said Sviggum, “we think there’s a chance we can get all our work done before the Passover/Easter break.”

In that unlikely scenario, even Sen. Julie Rosen, the lead Republican on the stadium bill, believes there would be almost zero chance of a stadium bill advancing.

Assuming legislators decide they can’t wrap up their business by the middle of next week, stadium chances improve. But the chances improve only slightly because leadership so far has shown little desire to push.

And passing a stadium bill is going to take some serious, top-down pushing.

Rosen said that Senate Majority Leader Dave Senjem has shown he’ll push. She’s not sure, though, about Senate Minority Leader Tom Bakk and even less sure about the House majority leadership.

Are House Republican leaders willing to push for a stadium?

“They can make anything happen,” said Rosen.

But do House leaders want to make something happen?

Is there any energy in the House for a stadium bill?  Any momentum pushing it forward?

Even Gov. Mark Dayton said “we need a lot of agreements” in a short time if this controversial deal is to be done.

He got one of those agreements Monday when seven of the 13 members of the Minneapolis council said they would support the funding arrangement involving the city.

That puts all the attention back on the Legislature.

The council’s reluctance had been the final shield protecting legislators from having to make a controversial decision.

The Legislature is almost out of excuses.

But these are wily folks.  When there’s a will to dodge, there’s always a way.

Take the case of Rep. Joe Hoppe, R-Chaska, and an assistant House majority leader. Hoppe said he’s “optimistic” that a deal for a stadium can be reached. In fact, the commerce committee he chairs will take up the Vikings stadium bill this week.

“But,” Hoppe said, he has concerns. The big concern House Republicans are pointing to is that there won’t be enough money raised from charitable gambling to pick up the state’s portion of the bill.

Actually, Hoppe was pointing to two concerns with the charitable gaming approach. First, he said House Republicans are concerned that even with those new electronic pull-tab devices, there won’t be enough revenue generated to cover the state’s share of stadium costs.

Hoppe also raised concerns about the stadium funding plan’s impact on the future of the charitable gaming industry.

It would be a sad thing indeed, Hoppe said, if the state needed so much stadium money from charitable gambling, that the traditional projects that charitable gambling funded – such as kids’ hockey rinks and baseball fields – would suddenly dry up.

So, there has to be backup financing, Hoppe said, and Plan B can’t involve money from the state’s general fund.

Hoppe pointed to user fees as a potential method to backstop charitable gambling. That could mean taxing such things as luxury suites and tickets.

But even if a Plan B payment resolution can be achieved, there are other issues.

“This is going to have to be a bipartisan bill,” Hoppe said.

DFL leaders have made it clear that they can deliver some votes but that Republicans will have to do the heavy lifting.

That’s a lot of ifs, buts and maybes to cover in a very short time.

And all of it assumes that House Republican leadership is ready to push.

Like Rosen in the Senate, Rep. Morrie Lanning, the leader of the Vikings’ stadium push in the House, believes that a stadium bill could be passed.

“There’s a desire to get this done,” Lanning said.

He said the idea of finding “other” sources of revenue to backstop charitable gaming is doable. 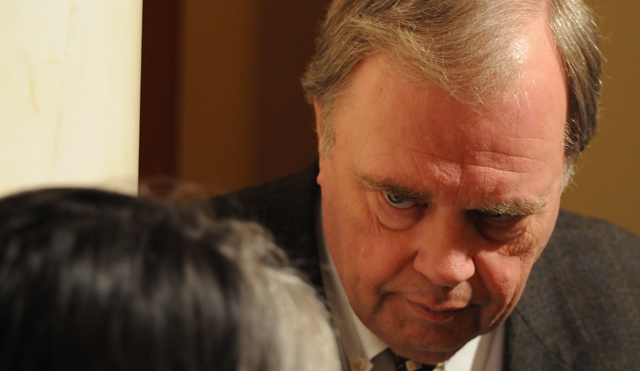 But he acknowledges that there are a lot of different ways to “kill” any energy that might exist for getting a stadium bill to the floor for an up or down vote.

Getting a stadium bill done means that the desire by some Republican legislators to get out of town in a hurry must not prevail because Lanning says all the pieces of the stadium could be put together in a week.

Despite the stadium issue hogging the headlines, there are many other issues the Legislature wants to resolve before heading home.

There’s a bonding bill that needs a lot of work. There’s the Republican desire to pass a tax reduction bill for businesses. And Republicans still have some work to do on their treasured Voter ID constitutional amendment.

That substantial to-do list works both for and against the possibility of a stadium bill passing. The remaining workload makes a quick adjournment seem unlikely.

But the workload also means that it’s relatively easy to slide the stadium bill to the bottom of the pile – especially given House Speaker Kurt Zellers’ reluctance to make it a priority.

Veteran lobbyists, the old hands around the Capitol, just don’t see a way for a Vikings stadium bill to make it to the floor this session. Politically, they say, there are more reasons to put off the issue until next year than there are to take it on now.

All in all, there is little stadium buzz at the Capitol, but that wheezing sound you could hear was the issue still clinging to life.