Anybody still think Target Field was a bad idea?

Since its opening two years ago, the Twins’ graceful new ballpark has won national acclaim and earned a place alongside other impressive upgrades to the local sports and cultural scene. Taken altogether, the Guthrie, Walker, TCF Bank Stadium, Xcel Center, the Science Museum of Minnesota and the soon-to-be-renovated Orchestra Hall, among other investments, have added immeasurably to value of living in this city and state.

The plan for a stadium on the Metrodome footprint that was unveiled Thursday by state, city and team negotiators isn’t perfect. But it’s probably the best that legislators and  Minneapolis City Council members will ever see. And it offers a reasonable solution to a problem that’s been simmering for more than a decade.

The plan is reasonable both in its stadium design and its financing.

First the design. While a stadium would fit better in a sports and entertainment district on downtown’s west side, the east side location isn’t bad. Two major freeways cross nearby, with a new interchange planned for Washington/3rd Street whether the stadium is built or not. Parking? Fans accustomed to the Dome won’t have to change their habits. New premium parking for 650 cars will be added in a ramp along 3rd Street, with a skyway connection to the stadium.

More important over the life of the stadium is transit. Light rail access is impressive, with a station sitting smack on a new plaza at the stadium’s main entrance. (It’s on the location of the current Metrodome station, with 450 parking spaces underground.) The station will serve both the Green and Blue lines, meaning that riders from Bloomington, Eden Prairie, Maple Grove, St. Paul and Woodbury will be able to reach the stadium directly when those lines are completed in the coming years. Northstar commuter trains are only four stops away.

Although on-site tailgating will be limited, rail connections make remote tailgating an attractive option. Tailgators will find a way.

A district ripe for redevelopment

The site plan shows the plaza eventually stretching westward to 5th Avenue and anticipates the eventual razing of the Star Tribune building. Perhaps as likely, those blocks will be redeveloped as high-rise or mid-rise housing with ground-floor retail, much in the character of the adjacent Mill District.

Indeed, the Mill District’s success with the Guthrie, Gold Medal Park and adjacent housing bodes well for the redevelopment potential near the new stadium. It’s a far more desirable location than when the Metrodome was going up in the early ‘80s.

A more playful version of the Colts’ stadium

As for the stadium itself, the architectural program is patterned after Lucas Oil Stadium in downtown Indianapolis, the site of this year’s Super Bowl. Opened in 2008, Lucas has a retractable roof and a flexible design that allows a wide variety of events. The Vikings roof will be fixed (it’s cheaper), but built to allow a convertible cover at a later date. The Lucus exterior is classic red brick, designed to mimic the Chicago warehouse style so prevalent in the Midwest. It comes across as a giant factory. 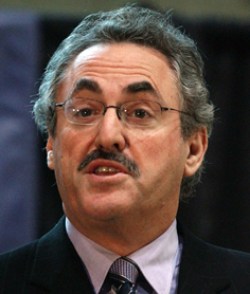 Something more playful might be better on the Metrodome site — patterns that pick up the character of nearby historic buildings, perhaps, but that also reflect the forward-leaning nature of Minneapolis architecture. Target Field is a great example — and a hard act to follow.

Central to the interior design is the dramatic exposed steel structure that supports the roof and the steep, horseshoe-shaped seating bowl that features a giant “picture window” to show off the city skyline. Capacity: 65,000, including 7,500 club seats and 150 suites.

Construction will be phased with the aim of forcing the team to play for only one year at the University of Minnesota. Contractors face a challenge in building two-thirds of the new stadium while the Metrodome still operates, then quickly demolishing the Dome and finishing the final third.

But Target Field was also a complex job. The ballpark had to fit partially over an active rail line and a freeway while squeezing under some adjoining streets. With no exterior space to erect cranes or store building materials, Mortenson Construction had to build the ballpark from the inside out, positioning its equipment on the infield. The Vikings project isn’t so cramped, but faces plenty of architectural and engineering challenges.

The stadium’s fortunes won’t rise or fall on design, however, but on financing, and on the politics of financing.

Most Minnesotans cling to the idea that the public has no business subsidizing professional sports, and, in a perfect world, they’re right. Too bad we don’t live in such a world. The market dictates that in mid-sized NFL cities such as ours, public and private partners are required.

Under the plan announced on Thursday, the Vikings will pay 44 percent of the $975 million construction cost; the state will pay 41 percent, and the city 15 percent. Over the life of the project (including operating and additional capital costs), the Vikings are projected to pay 51.6 percent; the state 26.7 percent, and the city 22.7 percent. The building will be owned by a new stadium authority.

No new general-fund state revenues and no additional city taxes will be needed. State bonds will be repaid by charitable gaming receipts, including new electronic pull-tabs. The city’s portion will be paid by extending existing hospitality sales taxes that have been used to support the Minneapolis Convention Center. The plan also includes a way for Minneapolis to claim control over some of the sales tax revenue it sends to the state to renovate Target Center and retire its debt.

A difficult road ahead

Given the destructive nature of today’s politics, legislators and City Council members will search for all kinds of excuses to abort this plan. Some will abhor gaming revenues. Some will demand a referendum. Some will consider the NFL unworthy of public involvement. Voting for something you consider imperfect has never been tougher in American politics. Compromise has become a dirty word. Still, this plan may come as close to reasonable as any plan the politicians at the Capitol and City Hall will ever see.

The economy has suffered a huge blow. People need the jobs that this project will deliver. And Minnesota, if it wants to emerge from this recession as a competitive state, needs to continue investing in its quality of life. The Vikings, whether or not you like football, are an important asset. That picture window in the west end zone of the new stadium, that’s the window through which millions of Americans will see our city and state.

Steve Berg is a writer and urban design consultant. He’s the author of “Target Field: The New Home of the Minnesota Twins.”