Bob Hansen is good at reinventing himself. It’s a trait that has enabled him to land paying jobs since taking a buyout five years ago from the Ford Motor Co. plant in St. Paul. Drawing from skills honed over the years, he has created a patchwork of jobs, both paid work and what some call “life work,” contributing to his family and community.

On the heels of downsizings, rightsizings, outsourcing and plant closings, many older boomers don’t have the wealth of high-paying job opportunities they once did. Hansen, 64, has forged ahead to make work and life decisions in line with what’s both do-able and important to him now.

He’s a boomer whose résumé reads like a short story. Teacher. Ordained Lutheran pastor. Associate director of the Chicago Cluster of Theological Schools. Minnesota Public Radio member-services representative. Automobile hood-fitter. At 64, he has created a bundle of part-time jobs to supplement his pension from Ford and a portion he receives of his late wife’s Social Security. In addition to tutoring and mentoring junior-high and high-school students, he provides quality control for a realty company and teaches a weekly Bible study class at his church. His favorite day is Wednesday. “That’s Grampa Hansen day,” he said. He spends it each week with his three young granddaughters.

Many older boomers who leave career jobs go looking for “encore work,” said LaRhae Knatterud, director of aging transformation at the Minnesota Department of Human Services. Her job put her at the helm of Transform 2010 [PDF] and Aging 2030, studies assessing the aging of the huge baby-boom generation (born from 1946 to 1964) in Minnesota.

How big is huge? A 2005 Minnesota Department of Health report pegged the number of baby boomers at 1.5 million strong. By 2030, Minnesotans age 65 and older will account for 24 percent of the state’s population, more than double the percentage recorded in 2000. And more than the numbers are changing.

As older boomers leave their jobs, many should open for younger workers. But in somewhat of a paradox, some employers are begging boomers to stay in their jobs, Knatterud said. Why? There aren’t enough younger people with the necessary skills. Some Fortune 500 companies are struggling to replace workers who’ve retired, she said. 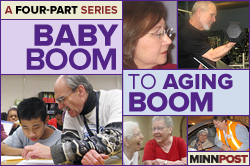 Another potential challenge looms, according to a Governor’s Workforce Development Council report [PDF]. By 2018, 70 percent of Minnesota jobs will require education beyond high school. Yet only 40 percent of working-age adults in Minnesota have a post-secondary degree. And education levels among American workers are expected to decline in coming years – a virtually unprecedented trend.

A similar gap is occurring in such industries as manufacturing, where most workers now need technical skills for such tasks as programming equipment. Area community colleges offer the training. But taking that leap isn’t an easy choice for some workers. “These are physically demanding jobs,” Knatterud said. “Some workers don’t want to go back to school for two, three or four years. For some, she said, “There’s the question of ‘How far do you go to get back in?’ ”

It’s among scenarios that can lead to long-term unemployment. A worker who’s laid off and cannot find work becomes dependent on public supports, Knatterud said. “It happens to some who were once at the top of their game. Some are too discouraged to look for work.” Yet for most people who quit working at 55, “it’s a long time to get by somehow.”

Hope for the discouraged

All Hands on Deck, an initiative of the Governor’s Workforce Development Council,  is a blueprint for strengthening Minnesota’s work force and closing the state’s skills gap. Its initiatives and programs are geared to people across the age span, from high-school students and college students to aging workers and people with disabilities. One initiative offers Lifelong Learning Accounts (LILAs), “portable money” designated for job training that can be used in a current job or applied to education for a new career. Knatterud frames it as “a way of putting funds together to change employment and be prepared with the right skills.”

Some boomers who’ve changed career paths say it was meant to be. After 32 years as a trucker delivering freight across country, Steve Grote was laid off five years ago because of a work shortage, he was told. “It happened on Friday the 13th,” he remembers.

He was 58. His mechanical interests got him rolling. “I have a ’55 Chevy I built from the ground up,” he said. Grote, who lives in Zumbrota, found help at the Minnesota WorkForce Center in Rochester. His next stop: Rochester Community and Technical College, where he completed a 72-credit diploma program called building utilities mechanic. That led to three internships. The third landed Grote, an Air Force veteran, a job as a lock operator with the U.S. Army Corps of Engineers in Minnesota.

Three years later, the nature lover is on the job at Lock and Dam No. 2 on the Mississippi River in Hastings. He operates and repairs locks, gates and maintenance equipment, does grounds-keeping, gives tours and monitors safety on the river. “I love it,” says Grote, now 62, of his job. “I wish I’d done it years before.”

MinnPost photo by Kay HarveySteve Grote, a laid-off truck driver, went back to school to launch a new career on the Mississippi River.

When David Buck was laid off a few years ago from a real-estate company at age 46, he said, he felt “all alone.” Then he met visionary Jan Hively, who said, “What you really need is community.” Buck, of Minneapolis, forged ahead to create his own. With Hively, who had earlier founded the Twin Cities-based Vital Aging Network, Buck co-created SHiFT, a grassroots network that blossomed over conversations in a Minneapolis coffeehouse. SHiFT offers sessions and workshops that have supported dozens of people at midlife and older seeking greater meaning in their work and their lives.

Besides starting a nonprofit, Buck needed to find another part-time paying job. He decided to pursue a new field for him: fundraising. After 75 interviews, Buck signed on for a half-time job raising money for the Washburn High School Foundation, where his children were to go to high school. He later took that experience and found a part-time position with the Benedictine Health Center of Minneapolis. He paired that with creation of his own consulting business, helping churches and schools to raise money and assist them with marketing. The combination “utilizes all of my gifts,” he said.

With incentive from SHiFT, Mike Mann, 62, a baker-turned-professional-storyteller, added to his string of creative pursuits. Mann plays Santa Claus during the Christmas season at Bachman’s in Minneapolis. The secular stories he tells “connect to the holiday’s message of giving,” he said.

SHiFT’s webmaster, Jay McManus, describes the SHiFT network as “a community of seekers.” But not everyone in the network is seeking a paycheck. SHiFT’s emphasis, Buck said, is “a more holistic approach.” It’s people “taking time to redefine what they want remaining life to be like. We have broad definitions of work – paid and unpaid.”

“That could mean taking care of a loved one,” he said. SHiFT values work of all kinds, Buck said. “Work gives us a sense of meaning and purpose. A lot of people at retirement age come back and say, ‘I gotta do something.’ We have encouraged people to work longer into their lives.”

Some SHiFT participants have transitioned into paid work after completing a “midternship,” an internship for people at midlife who learn alongside a mentor skilled in work that a “midtern” wants to pursue. While midternships are unavailable now, SHiFT hopes to bring them back. Watch SHiFT’s website for new developments.

Knatterud cites SHiFT co-creator Jan Hively’s philosophy: “Productive until the last breath. Even if it’s in new ways,” she said. You can read to a blind person, Knatterud said. Or to a child. You can send a get-well card.

They can fill a need where they see one — in their families or their communities.

“With ‘the great risk shift’ comes a redefinition of the safety net,” Knatterud said. “Values and what’s important start changing. There’s a redefinition of who we turn to when we need help.” In down times there’s a return to the values of family, community and helping each other, she said.

“It’s already happening,” she said. More Minnesota families are living in multigenerational households. Some share transportation, too. Along with that, Minnesota has among the highest rates of volunteerism.

To learn about volunteer opportunities and available services for seniors, call the Senior Linkage Line toll-free at 1-800-333-2433 or visit its website.

We are still as boomers a wonderful resource,” she said. Some may not get a high-paying job. Some will find another job and then later develop a disability and not be able to work. “But you can serve society in other ways,” she said. “Think of what you can do for your grandkids. We need to take advantage of that now.”

Thursday: Home, sweet home: Many want to ‘age in place.’