It appears the perennial arguments over alcohol sales at the university’s TCF Bank Stadium are about to end, and the U is scrambling to keep up.

This session’s omnibus liquor bill unanimously passed out of conference committee on Wednesday with provisions that will likely for the first time satisfy the Board of Regent’s concerns about serving alcohol to game attendees.

The U has for years fought with the Legislature for the right to only serve alcohol in suites and premium seating at the stadium, a notion that the populist state House has routinely rebuffed. But it appears that the Board of Regents supports provisions in the bill passed Wednesday that would allow fans in general seating to purchase alcohol in one area, typically known as a “beer garden.”

Approving the changes would also help the university recoup the roughly $1.5 million to $2 million it’s losing in suite and premium seating sales because the areas lack alcohol.

“I have indications from the Board of Regents that they will look favorably on this, but I can’t speak to that until they’ve taken action,” Todd Iverson, assistant director of Government Relations at the U, told the committee.

For the past two weeks, the “Stadium Alcohol Service Work Team” at the U has been meeting to forward recommendations for the slow-moving governing board to pass before the fall 2012 football season – pending the legislation’s approval.

“We’re working on a very short timeline if we’re going to make it available for this season, which is the plan,” Iverson said. “There are some big things that have to happen and some Board of Regents decisions that need to be made and policies that need to be looked at.”

Legislative regulations at TCF have gradually loosened since the ban was enacted in 2009. The regents chose not to act on a law passed in 2010 that would allow the university to sell alcohol in premium areas if it was also sold in one-third of the general seats.

Retiring GOP Sen. Geoff Michel, who sponsored the TCF Bank stadium bill, has been working to weaken and end the ban for years.

“I think we’re starting to get out of the micromanagement … and I think that’s the right direction to go,” he said after the bill passed out of conference committee. “What’s better than working on something for the U that involves football and beer? That’s a winning combination.”

Rep. Joe Atkins, one of the DFLers who originally opposed segregated service, said finally coming to a resolution is a “great feeling.”

Now university officials are working behind the scenes – counting on the legislation’s re-passage and a signature from Gov. Mark Dayton  — to iron out details ranging from whether to allow alcohol sponsorship of Gopher Athletics to the beer garden’s location by early May. 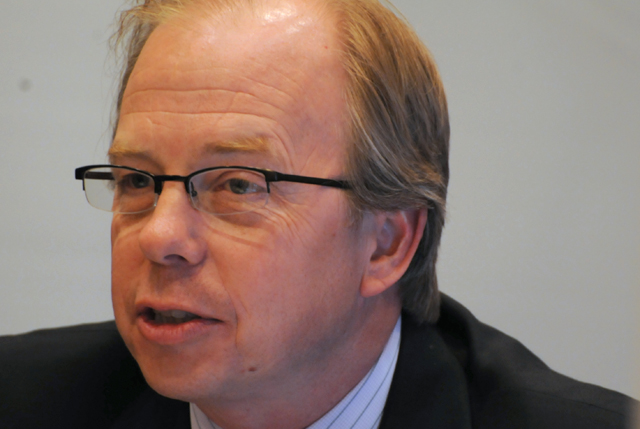 MinnPost photo by James NordTodd Iverson, assistant director of Government Relations at the U, testifying before the committee.

Iverson said that 75 Division I schools have alcohol sponsorships, which could limit the stadium’s beverage selection. Current state law requires that one Minnesota beer be served at a publicly funded facility.

Michel managed to crack a few jokes at the university’s expense amid the lighthearted committee discussion about the benefits of alcohol at the stadium.

“I couldn’t agree more, and that would help ticket sales, as well,” came the reply.

“That would be entertaining,” quipped Michel, prompting the committee to roar with laughter.

As it stands, the provision will come back up before the Legislature in 2014, where it could face other, unknown challenges. But, for now, everyone involved seemed pretty pleased.

“It’s a good feeling,” Michel said. “We did some good things here. It’s not going to be front page, but it’s good stuff.”

‘Beer garden’ may be coming to TCF Bank Stadium