Vera Quarberg and Evelyn Martin met in their new home, across town from the townhouse communities they left 10 years ago for another lifestyle. They found it at Presbyterian Homes in Woodbury, where they’ve also found companionship, exercise, entertainment, enlightenment and more. It is the kind of place aging boomers may well find attractive in a few years.

Both widowed and in their mid-80s, the two have become good friends. “We play games together,” Evelyn said. Bunko on Mondays, bingo on Tuesdays and Rummikub on Thursdays with a larger group. Vera faithfully gets to exercise classes three mornings a week in adjoining Central Park, where the regulars know her by name. Down the hall from her convenient apartment, “There’s always a group sitting around talking in the community room or the gathering room,” she said. She often joins in. Evelyn usually prefers “sitting at home and reading a book,” she said.

She’s in the right place. Woodbury’s public library is an elevator ride away. That’s not all. The library adjoins a spacious sun-splashed atrium with leafy green plants, wooden tables and benches, a rock-rimmed waterfall and a performance stage. It’s all part of Woodbury’s Central Park complex, which encompasses a coffee shop, exercise sessions and other classes, internet access and adjoins the Woodbury YMCA. True to its name, Central Park has become a central attraction in this suburban community.

With independent and assisted-living apartments and a memory-care unit, Presbyterian Homes is one among myriad choices for living out one’s years.

The importance of planning for that life stage will surface across the state in coming weeks, said LaRhae Knatterud, director of aging transformation for the Minnesota Department of Human Services. Minnesotans ages 40 to 65 will be introduced to Own Your Future, a nationwide campaign urging that they take a big step toward planning for their old age. Some information is posted on the DHS website. A link will be available on that site by mid-May to a website offering Minnesota-specific actions individuals can take to develop a plan for their long-term care and specific action kits for the campaign, Knatterud said.

The goal is to urge all adult Minnesotans to create a workable plan that will enable them to pay for their long-term care when they need it. And to “take this seriously,” Knatterud said. You need to have a plan for long-term care “so you have the money to get through the next 20 or 30 years.”

A couple of tips: Long-term-care insurance policies cost less for people who are younger and “aren’t yet failing.” For those lacking other options, there’s the possibility of purchasing a long-term-care policy to cover one year – “to get at least a year of care,” she said. 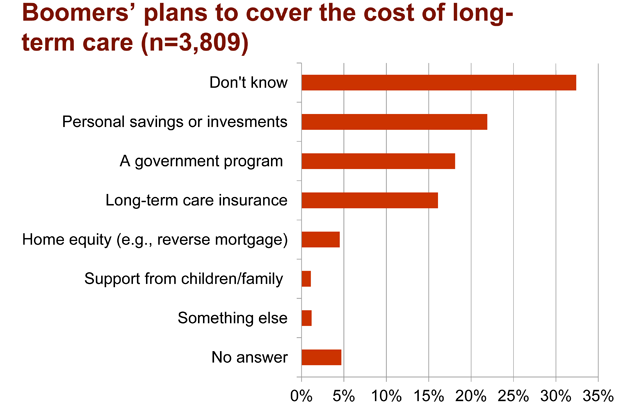 Eric Schubert, vice president for communications and public affairs for Ecumen, a Shoreview-based non-profit company providing diversified senior housing and services throughout Minnesota, said that about 10 percent of Minnesota adults have long-term-care insurance policies. Many don’t purchase them for a number of reasons, he said.

“Some assume government will pay for care. Some don’t understand the policies or don’t trust that they’ll be there when they need the benefit.” For others, “It’s not a priority. Or they can’t afford it. Or they don’t want to think about aging or the end of life.”

In the past, people needing services went straight to the nursing home. Over time, that has changed, Schubert said. More older people are aging in place in their homes or in apartments that provide services, he said. But when people spend down their assets to get on Medicaid and become impoverished, the option ends up being the nursing home. That’s changing, too, because Minnesota is allocating more dollars to home and community services, he said. But if it’s government dollars they’re spending, “they really don’t match up with a person’s desire to stay independent, because there are more and more cuts to government dollars. So we have to figure out a sustainable way to finance services.”

The state now spends a billion dollars a year on care for the elderly, Knatterud said. About 10 percent of Minnesota’s population is on Medicaid at any one time. If the state continues to pay for care at that rate as Minnesotans age, the cost would be $5 billion in 2030, according a report drafted by the Minnesota Legislature in 2005. That figure is based on a predicted doubling in the next 25 years of the state’s population over age 65 and a tripling of those over 85.

Own Your Future is aiming to put a new perspective on the situation.

“Planning for the future is something we have to do,” Knatterud said. That’s partly because some people “have no option but Medicaid.”

The Own Your Future campaign includes an effort to develop more affordable long-term care options for individuals who aren’t poor enough to qualify for public programs but not well-off enough to self-fund their care over their lifetime, she said. A second effort would seek to change Medicaid’s long-term-care provisions to better align with and encourage private payment for long-term care.

Assistance in long-term-care insurance planning, health insurance counseling and caregiver planning, along with volunteer opportunities and available services for seniors, is offered by the Senior LinkAge Line  or by calling toll-free 1-800-333-2433.

Lt. Gov. Yvonne Prettner Solon will chair an advisory group made up of key stakeholders who will oversee the campaign. Internet ads will help spread the word.

In a statewide poll by Shoreview-based Ecumen, Minnesota’s largest non-profit senior housing company, boomers said they expect technology to help them live not only longer but more independently as they age. The poll identified technology as an integral part of boomers’ lifestyle, Ecumen’s Schubert said. Technology will increase, he said, as it supports themes boomers identified as important to them in senior living: independence, choice, mobility, ease and quality of life.

Already senior living is benefiting from “nana technology,” a term coined by Andrew Carle, director of a senior housing program at George Mason University. That spans innovations in categories from cognition and health to lifestyle and safety products. The latter include sensors that alert a living community’s staff when there’s been no movement in a resident’s apartment – or the refrigerator hasn’t been opened or the toilet flushed – for too long, indicating something may be wrong. That’s just a glimpse at how technology is helping people to live independently as they age.

Technology is forging social connections, too. Ecumen Connects, a community website now serving 25 of  Ecumen’s 60 communities, gives family members another way to connect, said Lesli Donahue, an Ecumen systems analyst. “But also ways for our residents to connect with the greater world. “It’s kind of our personal Facebook,” tailored for ease of use. Family members and friends invited into the system share its benefits, including video chats. “Like on Skype,” Donahue said. Some post photos, too.

The site also serves as an electronic bulletin board, posting newsletters, menus and activities. Family members can log in from wherever they are. “Someone might say, ‘OK, Mom’s got bingo tomorrow night,’ ” Donahue said. An adult son or daughter and/or a grandchild might decide to join in the game. “Or knowing about it offers a point of conversation,” she said. Such as, “Did you have fun last night at Bingo?”

Almost everyone turns to family first for elder caregiving, Knatterud said. Ninety-one percent is provided by family, usually a spouse or adult children. That’s down 6 percent from two decades ago. Families tend now to be smaller, more women are working, and churches’ role in assisting families is decreasing, she said. Yet Knatterud estimates that family-provided long-term care is worth about $7 billion annually in Minnesota. And every 1 percent decline in the number of families providing elder care costs the public sector an additional $30 million per year.

Finances are an issue for many caregivers as well. “If you have to quit your job, it has an impact on your future, too” in lost income and reduced pensions as a result, Knatterud said. The Family Medical Leave Act allows caregivers 12 weeks off work a year for medical needs in the family, she said. But it’s often challenging, she said, to decide on the right time in a loved one’s decline to use it. “Flexible arrangements in the workplace,” she said, “are the thing that’s happening the most.”

Knatterud recommends additional initiatives to support family caregivers. “Parents are moving in with the kids,” or vice-versa, she said. “Multigenerational households have increased dramatically.” Some are sharing transportation, too. With the “great risk shift” of the last decade comes a redefinition of the safety net. The family becomes more important. Values and what’s important start changing. We’re going back to community values.”

As the population ages and more workers need to care for family members, employers will need to provide flexibility to ensure productivity, Knatterud said. “Soon half of workers will be caring for someone.”

Deborah Castaneda is among baby boomers who has transitioned from paid work to “life work.” Now 63, she has been a family caregiver for 11 years and across three generations. She took care of her husband for two years while he was dying of cancer. For six years she has taken part-time care of her granddaughter, now 7, and 12-year-old grandson in their home. “Their parents have erratic schedules,” she said, and her son-in-law’s work involves travel. She often picks the children up after school, gets them to guitar lessons and other activities, then heads home to make dinner for her mother.

She moved into her mother’s home in Minnetonka – the house where Castaneda grew up – seven years ago. “Mostly because my mother became less and less able to live by herself,” she said. Hilda Martin, 88, has spinal stenosis. “She was in pain, couldn’t walk well and went from a cane to a walker. Any excursion is usually in a wheelchair.” Her mother now has dementia, her daughter said. “Each moment is a beginning. The conversation 10 minutes ago somehow didn’t register. She is less motivated and sleeps a lot, which is a concern.”

Castaneda doesn’t leave her mother for more than a few hours. She tends the house, bills, maintenance, repairs and a big yard where her late father created lovely gardens. “There is always something to do,” she said. A sister-in-law and a sister often stop by to help. But her mother has stopped wanting to invite old friends in. “It’s now much more isolating for her,” she said. “More isolating for me, too.” Castaneda misses the paid work she once did. She misses having her own space and her own belongings around her.

“It’s a juggling act,” she said of her caregiving duties. But she’s happy to be part of her grandchildren’s day-to-day lives. And time with her mother has brought the two closer.