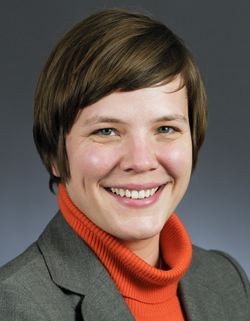 There was a symbol of bipartisanship in the House this morning, when legislators of both parties wore orange in a show of respect for Rep. Kate Knuth, a New Brighton DFLer who has decided she’s had enough of politics.

The 31-year-old Knuth has worn orange to the House floor every day of her three terms.

Over that time, she’s earned the respect of most of her colleagues because she’s bright — she has degrees from the University of Chicago and Oxford — and she has typically at least tried to understand the points of view of people she disagrees with.

The display of orange ranged from a blaze-orange hunting cap worn by Rep. Tony Cornish, R-Good Thunder, to a bright orange T-shirt worn under his sport coat by the usually less-flamboyant Rep. Bill Hilty, DFL-Finlayson.

Knuth, who has been wearing orange since her days at Irondale High, was touched by the display.

“It’s nice to see people here recognize each other as people,” Knuth said. “Rep. [Dan] Fabian told me he bought an orange tie, just for this occasion.”

But this display of orange affection didn’t create second thoughts about her decision to leave. Overall, the experience of being a legislator has fallen far short of her expectations.

“I thought this [the House chamber] would be a place where people from all over Minnesota would come together and talk about big things, important things,” she said. “We’ve stopped doing that.”

The big issue that Knuth, a conservation biologist, had hoped to deal with as a legislator is climate change.

“This could be humanity’s finest moment,” she said of dealing with an issue she finds “frightening.”

But instead of dealing with the issue, this Legislature has a substantial number of members who believe that dealing with climate issues forces economic sacrifice. Therefore, it’s been a subject pretty much off-limits.

The debates in the last two sessions have centered on two controversies — a football stadium this year and last year’s debate over the Republican-supported constitutional amendment to limit marriage to a man and woman.

That marriage amendment debate was particularly hard for Knuth.

“It felt so personally wrong,” said Knuth of the amendment that will appear on November’s ballot.

For political and personal reasons, she has decided to move on. She’s taught a course, carbon and renewable energy policy, at the University of Minnesota and is pursuing a doctorate in that area.

But first, she said she’s going to take a few weeks off at a cabin “up north” and “process my thoughts of these years [in the legislature].”

Today’s session, where there was so much orange, likely will tinge her thoughts with some smiles.

What’s the deal with orange?

“It’s a color that’s always made me happy,” she said.

“Look,” she said, pointing to an online site. “It’s the Pantone color of the year.”