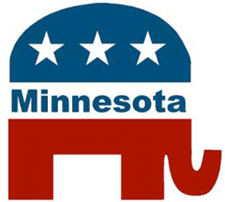 The Minnesota Republican Party is preparing for its state convention next month short of cash and bracing for internecine warfare between Ron Paul delegates and long-established activists.

But those potential obstacles don’t dampen Party Chair Pat Shortridge’s enthusiasm for the gathering May 17-18 in St. Cloud.

“We will be focused on presenting a very clear vision between our party and the Democrats,” he said.  The cornerstone of that presentation will be the endorsement of a candidate to challenge Sen. Amy Klobuchar.

Since state law forbids corporate contributions to political parties, the cost of the convention will be borne largely by the 3,000 people expected to attend and who will pay a $60 registration fee. Frills will be minimal. Shortridge chuckled in describing the theme as “nice, efficient and effective.”

Besides, he maintains, most people, even activists, are not interested in the inner workings of party. “They get interested because of the issues and the candidates,” he said.

Still, this year’s convention will offer fodder for political junkies. The party is undergoing a transformation, not unlike the 1980s, when social conservatives took over operations at the caucus, congressional district and state levels. Delegates who are pledged to Ron Paul will dominate the delegate seating. Pat Anderson, a member of the executive committee, described them as the core of a “liberty” caucus with fiscal and foreign policy concerns taking priority over social issues.

Shortridge said the development is positive. “We are bringing in new people, Tea Party members, libertarians and independents,” he said. “Incorporating new people is never a problem.”

Except when the new displaces the old. Shortridge acknowledges he’s heard grumbling from some party regulars about the new wave.

“Sometimes people don’t win delegate slots and things don’t go their way. They’re not happy about that – sure there’s always going to be that,” he said.   “I’ve stressed vehemently, we are choosing among friends. I expect our long time activists to be involved in supporting our candidates.”

Shortridge said he’s also told some of the new delegates: “We need you beyond Ron, we need you at the local level, at the presidential level.”

And, of course,they will be needed in the battle to unseat the popular, first-term  Klobuchar.  Shortridge sees a glimmer of hope for the Republican challenger.

“When we get beyond where she’s a nice person, and she is, she hasn’t delivered,” he said.  “I’ve seen some data that shows her support as a mile wide and inch deep.”

The New York Times is reporting that nationally independent expenditures groups and PACs are already spending heavily on behalf of Republican Senate candidates. Shortridge said he believes some of that money could get directed to Minnesota’s Senate race.

“I think that’s a very distinct possibility,” he said. “You can’t look at it now and say Minnesota is a top 10 competitive state, but nobody would have said that about [Rep. Chip] Cravaack and [Jim] Oberstar” two years ago,” referring to Oberstar’s unexpected defeat after decades in Congress.

Despite a shortage of money, Shortridge said he is looking forward to the fall campaign.

“I am really excited to get to the end of the intra-squad season,” he said. “At some point you have to hit the other team.”