In the contest to be the Republican challenger to Sen. Amy Klobuchar, a last-place presidential contender may decide the outcome. Based on the strength and organization of Ron Paul’s Minnesota campaign, the odds are tipping in favor of the candidate Paul has endorsed: Rosemount High School economics teacher and state Rep. Kurt Bills.

Campaign chair and legislative colleague Keith Downey is more direct. Bills “definitely” will win the endorsement of Republican delegates who make their decision May 18 and 19 in St. Cloud.

None of the GOP candidates has raised much money, and that means advantage goes to Bills. Identifying, cultivating and encouraging delegates to support a candidate is the single most important element of an endorsing campaign. Just look at the 1994 Republican endorsement for governor when the extremely popular incumbent, Arne Carlson, lost the endorsement to the delegate-focused Alan Quist.

Even one of Bills’ competitors, the campaign of former state Rep. Dan Severson, acknowledges there’s a reason for Bills to be confident. Paul’s Minnesota operation has secured delegate support with exquisite precision, and a significant number of those delegates will likely back Bills, according to a Severson’s campaign manager.

But the campaigns for all three contenders say the race isn’t over. Delegates want to be courted until the very end and delegate counts are fluid.

“From what we are seeing now, it’s starting to move but more than half are undecided,” said Kyler Nerison, communications director for Pete Hegseth, the Ivy-league educated, Afghan war veteran from Forest Lake who is leading in fundraising. “It’s still pretty wide open.”

Fitzsimmons points to the relative anonymity of Bills and Hegseth as a complication that led to most of the state convention delegates going into the process as uncommitted. “There’s still a very high amount of non-commitments,” he said.

Fitzsimmons should know. He’s one of the best Republican nose-counters in the state. He acknowledged that he has a count of delegates likely to endorse Bills, “but I’m not telling it to you,” he said.

Fitzsimmons, like the other campaign officials, prefers to extol his own candidate’s virtues, citing what he says is Bills’ ability to address the economic concerns of  young voters. “You have somebody dealing day-in and day-out with young people. Even when they did it by the book, everything they were supposed to do – they’re feeling they’ve been given the short end of the stick.  It’s a frustration that can be tapped into,” Fitzsimmons said. 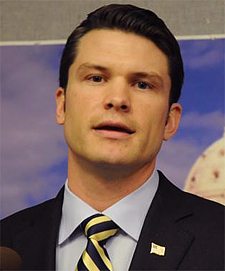 The Severson campaign points out Severson’s years of legislative and leadership experience, including a 2010 statewide run for secretary of state, and an ability to reach the new voters.

As for Hegseth, he is a 31-year-old war hero with some demonstrated fundraising prowess. “In the month since Pete’s announcement, he’s outraised his opponents,” said Nerison. “That is a point for the delegates. They know it’s going to take a lot of money to beat Klobuchar in November.”

Nerison also took a swipe at Bills’ support for some of Ron Paul’s arcane monetary positions. “Gold standard and paper money — you can read out of an economic textbook all day and that’s not going to sway voters,” said Narrison.

Fitzsimmons responded: “What they’re really trying to do is cast Ron Paul and Kurt Bills as one and the same. But the relationship is Bills introducing Paul at a campaign event and Paul endorsing him.”

Bills Campaign Chair Downey, who supported former Gov. Tim Pawlenty in the presidential race, respects Paul’s delegate organization and criticizes the portrayal of Paul delegates as uninterested in the rest of the Republican Party. “To disparage the Ron Paul people is an insult to the process,” he said.

Although as many as half of the convention’s 2,200 delegates may be uncommitted and it takes 60 percent to get an endorsement, no one disputes there’s a Ron Paul tidal wave. Three months ago, no one knew who Kurt Bills was. In just over three weeks, he may well surf the wave to endorsement.