The political battle is already gearing up over Minnesota’s proposed Photo ID constitutional amendment, which was approved last week by the Legislature.

At least three Ballot Question Committees have filed with the state board that tracks political organizations, and more groups are poised for the fight.

Some groups are focusing on legal issues, preparing litigation opposing the amendment, which would require voters to show an ID and affect same-day registration and absentee balloting procedures.

Others will focus on the political campaign, with both proponents and opponents trying to persuade voters about the Republican-backed initiative that will be on the November general- election ballot.

“Nonprofits were crucial in getting the Legislature to consider [Photo ID], in getting it passed through the Legislature,” said Steven Schier, a political science professor at  Carleton College, “They will be very important in the public debate about it coming up to the vote on the constitutional amendment.”

The groups are planning extensive media buys throughout the summer and fall, as well as strong grass-roots efforts to reach voters face to face.

The campaigns surrounding the Voter ID amendment are still in their infancy.

A broad coalition of groups that oppose Photo ID launched the most recent Ballot Question Committee Thursday at the state Capitol.

Our Vote Our Future is backed by TakeAction Minnesota and, among others, AARP, the AFL-CIO and the League of Women Voters.

At a press conference launching the campaign effort, Dan McGrath, TakeAction’s executive director, said that many details – including a proposed budget – are still up in the air. He also declined to say how the money would be divided among campaigning and advertising. 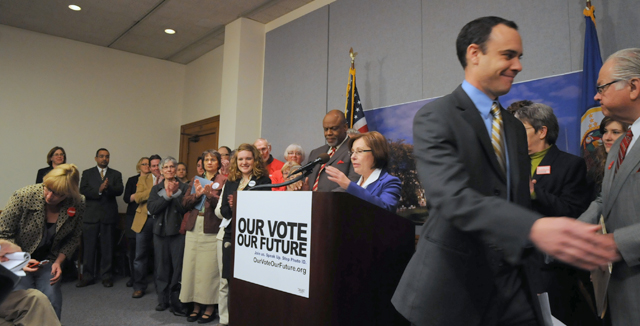 MinnPost photo by James NordTakeAction Minnesota Executive Director Dan McGrath walking away from the podium on Thursday after unveiling Our Vote Our Future, a coalition of groups against Photo ID.

But McGrath did stress the strengths of the coalition, which includes statewide groups that have hundreds of thousands of members and budgets of their own.

“We have lots and lots of organizations who are already expending resources on this issue, so we as a campaign already started with an extraordinary infrastructure in place to reach people where they’re at,” he said. “With that said, we recognize we need to raise dollars, but we’re working to devise exactly how much.”

“We recognize that we are the underdogs in this fight,” he said. “But we also know that the conditions to defeat the Voter ID amendment already exist.”

In addition, the League of Women Voters could register its own ballot committee soon with the Minnesota Campaign Finance and Public Disclosure Board, according to the group’s executive director, Laura Fredrick Wang.

Likewise, the Minnesota chapter of the American Civil Liberties Union has a separate committee dedicated to defeating both Photo ID amendment and the marriage amendment, which also will be on the ballot.

The groups on Thursday also took an obligatory swing at Photo ID, which they say will disenfranchise at-risk voters, end Election Day registration and introduce an enormous new bureaucracy in the form of provisional balloting.

McGrath said it’s the coalition’s goal is to spread “three truths” among voters – that it’s “costly, restrictive and unnecessary.”

“Putting lipstick on a pig will never entice me to want to pucker up — and perfume on an aroused skunk is not going to make me want to draw closer,” said Alfred Babington-Johnson, CEO of the Minneapolis-based Stairstep Foundation, which assists community improvement programs. 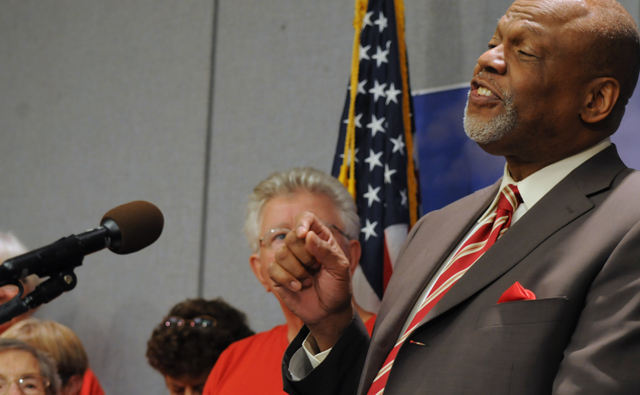 MinnPost photo by James NordAlfred Babington-Johnson, CEO of the Stairstep Foundation, speaking against Photo ID at the press conference on Thursday.

But supporters of Photo ID dismiss all of the claimed potential problems.

Minnesota Majority is the main group behind efforts to pass the Photo ID amendment. The group’s executive director, who is also named Dan McGrath, had a more detailed plan about how his side intends to win.

McGrath said he hopes ProtectMyVote.com, the Ballot Question Committee he chairs, raises about $3 million before the election.

“What I hope to do at the end of the campaign is kind of a mass media saturation campaign for the month of October,” he said in an interview. “I want wall-to-wall TV coverage of our ads, and this will get us there if we can raise that much money. The other stuff is pretty inexpensive.”

The size of Minnesota Majority’s alliance, which includes several conservative groups, pales in comparison to the 88 organizations that back Our Vote Our Future. However, McGrath, the proponent, said strong support from the public would help his side win.

“We don’t want to spend too little,” he said. “I think the opposition is going to spend a lot more. I don’t think we need to match them dollar for dollar, because … we do have the momentum. We have the public on our side already on this. So our objective is just going to be to counteract the misinformation like what came from Gov. [Mark] Dayton on Monday.”

Dayton that day issued a ceremonial veto, even though constitutional amendments bypass his desk and go directly to the voter. He criticized it as bad policy for eliminating Election Day registration and implementing provisional balloting.

Minnesota Majority’s McGrath and other Photo ID supporters argue, however, that Dayton and Secretary of State Mark Ritchie have no proof that same-day registration will change or that provisional balloting is overly burdensome.

“That’s a cynical ploy to pit a popular feature of our election system against a popular reform measure, but it’s a false dilemma that they’re offering to the voters, because it’s not one or the other. We’re going to have both,” he said.

Minnesota Majority is in the process of dismantling WeWantVoterID.com, a tool it used to urge lawmakers to pass the amendment. Despite its popularity in polling numbers, McGrath was often one of the only testifiers in support of the measure during committee hearings,

“It’s up to the voters to decide,” McGrath said. “What we know right now is that it’s got strong support, but between now and November — who knows.”

While groups like Our Vote Our Future and ProtectMyVote make their case in the media, on the airwaves and at front doors, opponents aim to use the courts to prevent the amendment from ever getting to the ballot.

Common Cause Minnesota, the state unit of a national citizens’ lobbying organization, said it would partner with the ACLU to attempt to get the amendment tossed off the ballot or rewritten. Wang from the League of Women Voters said her group also is interested in litigation, as it has done nationally.

“My main concern with the constitutional amendment right now is really with the question itself,” Mike Dean, Common Cause Minnesota executive director, said. “It is deceptive and misleading to voters, and that creates an opportunity for a legal challenge.”

Dean said the short ballot question doesn’t fully explain the potential consequences of the legislation, including new provisional balloting and a potential end to same-day registration.

Opponents of Photo ID, including the ACLU, warned during committee hearings that passing the measure would open up Minnesota to a “cottage industry” of lawsuits attempting to parse exactly what the amendment means.

Dean said there isn’t much legal precedent in Minnesota on the issue because we’re not an initiative state. Not only does the amendment face legal challenges before it hits the ballot, but it could also require the courts to interpret it afterward because passage would enshrine it in the state  Constitution.

“This is going to be litigated for at least the next five to 10 years. … it’s going to be full of chaos over the next decade,” he said. “What I expect is that as this gets litigated, you’re going to have election rules that are going to change from election to election cycle, and different courts interpret the rules or the language differently.”