The National Football League got its money’s worth from a quick flight to Minneapolis this morning.

A Vikings’ stadium bill, that appeared to be at death’s door Monday night, is alive and well and likely will be moving toward a floor vote before this session ends. 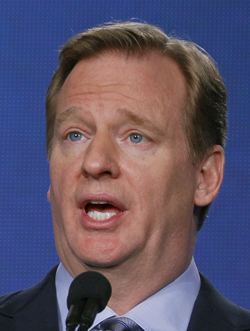 After an hour-long meeting with NFL Commissioner Roger Goodell this morning, legislative leaders, Gov. Mark Dayton and NFL executives came to microphones, singing praises of each other and all talking of how the meeting had been “productive.’’

No one would say exactly what was said in the meeting. But the end result was clear: For the first time this session, all leaders were clearly on board for getting a floor vote on the stadium.

House Speaker Kurt Zellers, who has spent most of the session being vague about the issue, and Senate majority leader Dave Senjem, an out-front stadium supporter, were so fired up after the meeting that they were thanking NFL leaders for coming to Minnesota and thanking Dayton for “his leadership.’’

What remains unclear is if, even assuming the bill comes to the floor, there are the votes to pass the $1 billion project.

A former House leader, who was watching the post-meeting news conference, noted that in the past, legislative leaders would have already had “a nose count.’’ Those days are gone.

Zellers might have some arm-twisting strength in the House. But Senjem’s caucus is much more difficult to control.

All leaders agreed that there are bi-partisan supporters of the project; bi-partisan foes.

For his part, Dayton said he’ll do all that he can to find support for the measure.

“I’ll speak at their caucuses, I’ll invite them to my office, I’ll go to their offices,’’ he said of the efforts he’s ready to make to urge legislators to support the bill.

Senate minority leader Tom Bakk, a stadium supporter, vowed that he would make sure there are enough DFL votes to get the measure through a Senate local government committee, which is dominated by Republicans unfriendly to the bill. That bill has been on hold in that committee for weeks.

How did the mood swing so rapidly on the Vikings’ deal?

Goodell insisted the league did not issue any threats, though he did tell legislative leaders, “action needs to be taken now. . . .There were no threats, no threats  at all.  . . .The Wilfs (the Vikings owners) are frustrated but they want to remain here.’’

Apparently, Goodell did tell the leaders that if the bill doesn’t pass, the Vikings’ situation would be seen as a stalemate by league owners. Stalemate is a requirement of the league that allows teams to apply to the league for re-location.

There were different versions from meeting participants whether the subject of Los Angeles was brought up. Senjem said Los Angeles, a possible re-location site for the Vikings, was not a subject of the meeting. Sen. Julie Rosen, the Senate author of the bill, said LA did get mentioned.

Dayton broke the tie on LA. The city was mentioned in the meeting.

Said Dayton, “The commissioner said they’d like a team in Los Angeles, but not the Vikings.’’

“They have a plane to catch,’’ said Dayton in explaining to hordes of reporters why they had to quickly get out of town.

Their mere presence for the meeting, Senjem said, “elevated the tone’’of the stadium issue.

Senjem then filled the air with football analogies. 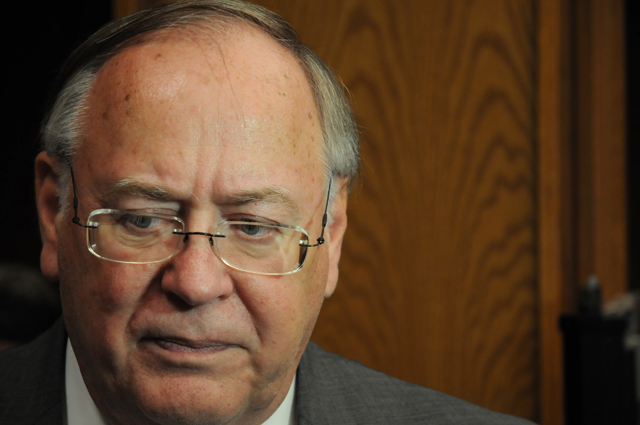 “We’re here to move that ball,’’ Senjem said. “It’s the two-minute drill. We have to move the ball and hopefully get it across the goal line. . . .It’s complicated. But we have to keep working until we find the right play.’’

Rep. Morrie Lanning and Rosen, the authors of the bill, were more optimistic about passage than they’ve been all session.

On Monday night, after the House government operations committee voted against advancing the bill, Lanning had been down and disgusted.

He had said then that someone would “need to pull a rabbit out of a hat’’ to revive the bill this session.

He said this morning the magic had happened. The rabbit had been pulled from the legislative hat.

Both Rosen and Lanning said they expected amendments to their bill.

Look for at least some DFLers to push for more support from business leaders, who have been cheerleaders for the project but have not put any money behind their cheers.  Look for DFLers to suggest a tax on suites as a way to get a little business skin in the game.

What made this meeting different from all of those that had preceded it, Lanning said, was that Goodell, who has met with the authors and the governor, for the first time was in the same room with all legislative leaders.

There apparently was some talk of the politics of the situation. Since the start of the session, most had believed that legislators would try to duck the controversial stadium issue, putting it off for next year.

But Bakk said there are big problems with that approach. Next session, legislators likely will be facing another deficit. Beyond that, as many as a third of the members in the next session will be new, Bakk said.

“It would be only harder next year,’’ Bakk said.

Dayton said NFL executives – and the Vikings – clearly were not inclined to look favorably on the “next year’’ strategy.

“No action [this session] is essentially a ‘no’ on the stadium,’’ Dayton said. “It creates an environment of uncertainty.’’

As always, Dayton used words such as “urgency’’ to describe the status of the Vikings, the stadium and the possibility of re-location.