After the Photo ID constitutional amendment — minus controversial technology language added by the Senate — clears both houses again, its fate will lie with Minnesota’s citizens in November.

A hastily called conference committee on Monday adopted final language, dropping an amendment that had gained support from both Senate Republicans and opponents of the overall measure.

Howe told the Senate, which overwhelmingly passed his amendment 63-3, that it’s a bad decision to place dated technology requirements in the state Constitution.

“That’s why I believe there was such a strong Senate position on it,” he said in an interview, “because it did improve the language in that amendment.”

Senate DFLers supported the change because it at least in part addresses their concerns that the Photo ID requirement would disenfranchise many voters.

“That ‘or equivalent’ language, I think, gave some comfort to me that future Legislatures would have to be more inclusive in determining what types of IDs would be acceptable,” DFL Sen. Katie Sieben, who has been highly involved in the debate, said in an interview.

“It’s just a general consensus that that’s an issue, whether it’s the Senate side or the House side, whatever it all is, it’s input saying that’s a problem,” she said.

The House debated similar language but eventually dispatched it.

Sen. Scott Newman, the chief Senate author, and Kiffmeyer agreed to new language on the bill before it was released publicly on Monday.

The compromise provisions removed Howe’s “equivalent” language and distinguished between in-person and not-in-person voters in order to better align with other state Photo ID measures that have passed judicial muster.

When asked if there was discussion about Howe’s change, one of the most significant since the debate over this year’s amendments began, Kiffmeyer replied: “Not much.”

Interviews with nine of the 10n conferees, five from each body, show that Howe’s amendment was likely to fail if conference committee members had been forced to vote on it.

Newman testified in support of Howe’s amendment on the Senate floor in March, saying he “philosophically” agreed with its intent to give future Legislatures more latitude in writing the enacting language.

But after voting for the altered rules, Newman chose not to place Howe on the conference committee. He did, however, appoint two of the three ‘no’ votes on Howe’s amendment as Senate-side conferees.

Newman said after the committee adjourned that he didn’t purposely exclude Howe from the deliberations. 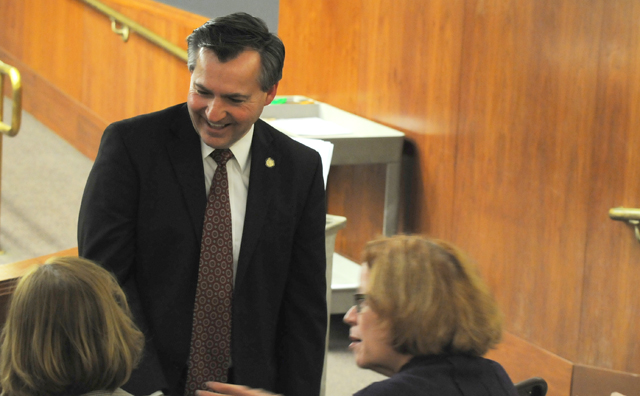 MinnPost photo by James NordSen. John Howe, who proposed a substantial amendment to the constitutional amendment, before the meeting convened on Monday.

And Sen. Warren Limmer, one of the “no” votes, sponsored the Photo ID legislation Gov. Mark Dayton vetoed last session and has significant experience in election issues.

“I firmly believe that my amendment will be taken out,” Howe said a day before the committee convened. “I mean, I think that when you see that two of the three people who voted against my amendment were appointed as conferees, I think that pretty much sealed that amendment’s fate, although we did have a pretty strong Senate position on it.”

Even so, Howe raised his concerns before the committee, where he spoke in support of Photo ID but against parts of the Republican measure here.

Howe said he’d again call for the same amendment on the Senate floor when it comes up.

The conference committee, short three members, voted unanimously to send the constitutional amendment back to both floors for final votes. It would then bypass Gov. Mark Dayton’s desk and head straight to the voters in the general elections.

Members never had to vote on Howe’s change.

But the Republican conferees did offer their most vigorous defense of Photo ID to date, responding to testimony against the measure.

Kiffmeyer asked Fraser if she would support any Photo ID constitutional amendment.

“I think it’s a misnomer to call this a Photo ID amendment because it’s really an amendment that’s going to completely overhaul Minnesota’s election system,” she added.

Rep. Keith Downey disputed claims that there are nearly 1 million voters that would be affected by the Photo ID amendment.

“These wild numbers, just off-the-charts numbers that don’t jive with any experience in any other state under a Photo ID requirement. Boy, they really don’t hold up underwater, and I think they warrant some initial investigation,” he said.

Newman called out “naysayers,” and Kiffmeyer criticized Secretary of State Mark Ritchie without naming him for his opposition.

But after the meeting, Newman appeared refreshed.

Howe left the meeting without speaking to his Republican colleagues.