Politics abhors a vacuum. Yet, as the legislative session continues to grind toward a conclusion, a vacuum seems to exist as to who is in charge of the Senate Republican caucus.

Dave Senjem, the affable Rochester fellow, has the title of Senate majority leader. But is he really in charge?

Conversations with lobbyists and Republican and DFL senators — all of whom for obvious reasons would only comment without attribution — suggest that Senjem probably has only limited power in speaking for his caucus.

One DFL senator described the Republicans power situation this way: “It’s a little like Somalia. Nobody’s really in charge. What you have are a bunch of warlords.”

Others agreed with that assessment.  Sens. Julianne Ortman of Chanhassen, David Hann of Eden Prairie and Dave Thompson, the brash first-termer from Lakeville, are among the warlords.

For the last few days, Ortman of Chanhassen, has seemed like the most powerful player in the Senate because of the way she has held up the progress of the Vikings stadium bill by first calling for the bill to be heard before the taxes committee she chairs and then by delaying a committee meeting on it.

But is she the most powerful Republican senator?

“She’d like to be,” said a fellow Republican colleague.

Another Republican, however, said Senate power is not Ortman’s immediate issue. 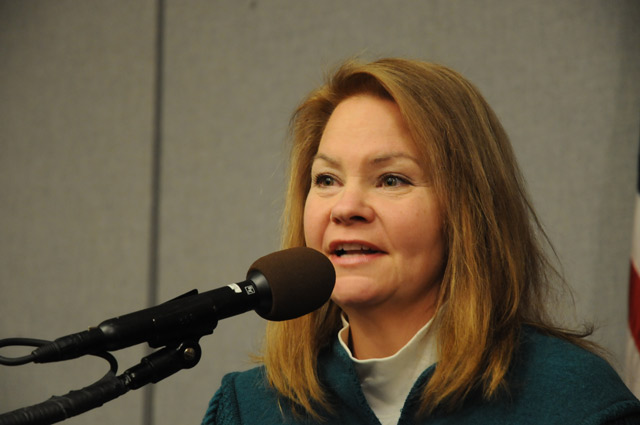 MinnPost photo by James NordSen. Julianne Ortman has played a key role this week on the Vikings stadium issue.

“She’s got an endorsement issue,” a veteran Republican senator explained. “She’s in a very difficult position.”

In fairness to Ortman, she has been consistent in her push for a tax bill that would give property tax relief to state businesses. For months, she has pressed this tax relief as a jobs bill, the thinking being that businesses across the state will use the tax relief to expand.

(DFLers counter that it would be out-of-state corporations that would benefit the most. Beyond that, it would create another hole in the state budget.)

That issue is the one big bargaining chip Republicans have in trying to negotiate an end to the session with Gov. Mark Dayton.

They believe he’ll concede on taxes to get the stadium and a bonding bill. Certainly, Ortman has played that chip for all that it’s worth.

Legislators in both the House and Senate have essentially been sitting on their hands waiting for Ortman’s committee to hear the Vikings bill.

Her committee finally is sitting down for a hearing this afternoon.

The delay has created timing problems for the GOP.  At the start of the week, the titular heads of the caucuses had hoped to finish up their work by Saturday. Now, the talk is of Monday – or Tuesday.

The question now is whether House Republicans would take up on the stadium on the floor Saturday.

One thing that would prevent that is an anti-tax rally scheduled for Saturday. The rally will feature two heroes of the small-government crowd, Grover Norquist and former Republican Party presidential candidate Herman Cain. That’s not the crowd that looks favorably upon such things as publicly subsidized stadiums.

As a matter of fact, Capitol speculation is growing that the House might take up the stadium bill late Friday to avoid taking a vote during the rally.

One quick aside about Cain, who once called Minneapolis home. He was a fairly well-known gospel singer in Minneapolis. (He’s got the great pipes.)

Sen. Jeff Hayden, DFL-Minneapolis, was talking of how his mother recalls Cain the singer.

But back to that original question: Who’s in charge among Minnesota Senate Republicans?

There appears to be a split, right down the middle of the caucus.

There’s the tea-party group — mostly newcomers — and the old guard.

It’s clear that Thompson likes the spotlight, a fact that causes great consternation among veteran GOP senators.  Once upon a time, freshmen senators were to be seen but not heard.

“Apparently,” said one GOP senate veteran, “he never learned that.”

Thompson is a loose cannon, a favorite of reporters because of his sometimes inflamatory quotes.

But, according to a longtime lobbyist, it’s Hann who probably is top warlord of the most conservative faction of Senate Republicans.  He is able to move, relatively easily, among the social conservatives, the Tea Party group and the more traditional Republicans.

“He understands the process, and he’ll actually listen to you,” the lobbyist said.

The one thing that brings all the warlords together is opposition to the stadium deal. (They will be joined in attempting to block the stadium by the DFL’s most liberal members.)

Who’s in charge around here?

We probably won’t know until sometime next week.