A Vikings stadium bill, which languished for months and seemingly was stopped in its tracks by a House committee a week ago, is moving again, faster and faster.

Fear that the Vikings might actually move played a part. And a sense that public opposition to a subsidy for the Vikings has at least somewhat diminished.

And perhaps a sense among politicians of both parties that the public would be disgusted if this Legislature didn’t do something on the issue – at least vote it up or down.

But for whatever reason, the stadium bill is on the move, showing again that when legislative leaders want action, they can make it happen.

Monday night, on a voice vote, the massive House Ways and Means Committee passed the stadium measure with a little legislative razzle-dazzle. The stadium bill was attached, as an amendment, to Rep. John Kriesel’s charitable gaming bill.

The support of the combined bills means that it will go directly to the House floor, probably for an agonizingly long debate on Wednesday.

Few seem to have a guess as to how it will fare when House members have to vote “yes” or “no.”

The Senate Jobs Committee, meanwhile, is to take up the measure this morning and then move the bill to a finance committee. Given the way the skids appear to be greased, most are guessing that the bill will pass those two committees and get to the Senate floor.

What happens on the floors of the two chambers appears to be anybody’s guess. But one thing is certain: There will be no hiding behind voice votes then.

“I think we have strong support,” said Rep. Morrie Lanning, the Republican rep who has been pushing this bill.  “It will be close, but I think we have a chance.”

The debate that surrounded the bill Monday night almost certainly was a precursor of what is to come.

Opponents — a combo package of DFLers and Republican Tom Hackbarth, who was pushing hard to bring racinos back from the dead — tried to kill the deal by questioning the financial underpinnings of the $1 billion deal, which calls for the Vikings to pay $427 million, the state to come up with $398 and the city of Minneapolis to pay $150 million toward construction of the stadium.

Additionally, the city will pay nearly $200 million more in operating expenses for the stadium in the late years of the 30-year deal. (All of the city’s money will come from an extension of the sales tax now used to pay off convention center bonds.)

The big questions Monday night involved financing, particularly whether the expansion of charitable gambling by allowing the use of electronic pull-tab devices actually can produce the revenue needed to pay off the bonds.

Hackbarth, a Republican from Cedar, was particularly aggressive in questioning Lanning and Kriesel, a Cottage Grove Republican, on the “what ifs.” 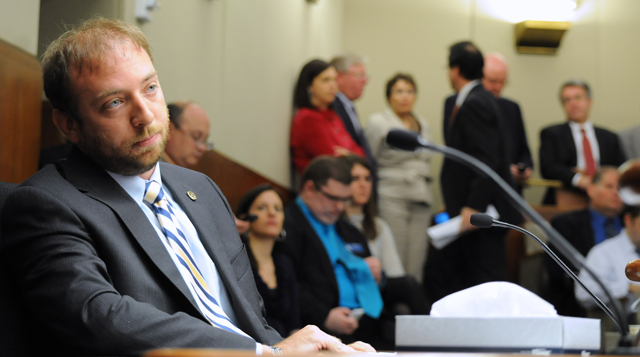 MinnPost photo by James NordRep. John Kriesel, a stadium supporter whose funding bill became the vehicle for the stadium measure, testifying before the committee on Monday.

“What proof do you have they’ll bring in this sort of revenue?” Hackbarth asked.

In time, Hackbarth’s true motive for questioning the numbers came out. He’s a big supporter of establishing racinos at the metro area’s two racetracks.

“Racino is proven,” Hackbarth said. “We have research on that. But electronic pull-tabs?  … If these numbers aren’t right, it puts it on the back of the people of Minnesota.”

A couple of hours into last night’s committee meaning, Rep. Mary Liz Holberg, the chairwoman, called for a time out and met with Republicans on the committee. Apparently a racino amendment had been proposed for the stadium bill. But following that meeting, the amendment didn’t see the light of day.

After the committee vote, Lanning said he wasn’t surprised by the attempt to revive racinos.  If racinos had been the funding source, the bill would have had no chance of passing. Opposition from the tribes would have been too strong; DFLers especially would have not supported the measure.

The whole issue surrounding Minneapolis and its city charter were also high on the priority list of those trying to stop passage.

Rep. Keith Downey, R-Edina, tried to pin down Minneapolis Mayor R.T. Rybak about the charter, which calls for a referendum on any expenditure of $10 million or more for a sports facility.

He explained that the current hospitality taxes collected from hotels, restaurants and bars in Minneapolis  for the convention center  are not actually city taxes. They’re state taxes, collected by the state and then used to pay off the bonds.

Downey responded by saying if those taxes are actually state taxes, then the city is actually not putting up anything for the stadium.

But the charter is only a part of what will unfold in Minneapolis.

The other big issue is whether the city can use the money from the extension of the sales tax to continue to improve the convention center and to rehab the Target Center.

Currently, the Senate has stripped money for the Target Center out of the bill. That will have to come back in any final deal, Lanning said, or the stadium bill will be killed.

“The city will have the final say,” Lanning said.

Even if the bill was passed by the House and Senate and was signed by the governor, Minneapolis will have final say, he said. The support on the city council is already shaky.  Without money for the Target Center, the deal will die, Lanning predicted.

“A bumpy road” is how the Vikings’ Lester Bagley described the process.

But that there’s a road at all still is surprising to many in the Legislature. The effort to make a stadium bill happen this session has developed seemingly overnight.

Some of the things that were supposed to help actually may have hindered the effort.

Over the weekend, for example, hundreds of Vikings fans sent emails to legislators pushing for support.

But in many cases, the language in those emails was threatening and obscene, which likely did more to hurt the team’s chances than to help. Additionally, about 50 Vikings fans showed up at the Capitol Monday to lobby for the stadium.

This was not a politically savvy group and in at least one case, they were upset at a legislator for something she didn’t do.

Legislators of both parties also have been critical of the Vikings’ lobbying efforts.

DFL Rep. Tom Rukavina, for example, said a Vikings’ lobbyist hadn’t actually visited his office until Monday. Other legislators also said they never were visited by any of the army of the Vikings’ lobbyists.

Rukavina took a shot at the Vikings’ lobbying while introducing an amendment to the bill that did receive committee support.

His amendment calls for the stadium to be “built with American steel made from Minnesota iron ore.”

“Everybody’s your friend when you need votes,” said Rukavina.

When a Republican legislator suggested that maybe there should be measures calling for Hormel hot dogs and Grain Belt beer served at the new stadium, Rukavina was all for it.

Rukavina’s steel/ore amendment passed. So, look for hot dogs and beer to show up in the floor debates.

Besides the financing questions, there are sure to be tough questions asked in both chambers about the lack of support for the bill from Minneapolis and Hennepin County legislators. Their reluctance is baffling to many, including Rukavina, who can’t imagine saying no to a $1 billion project in his district.

But for all of the questions and all of the weaknesses, the bill has suddenly become an overnight sensation.

“There were times it looked bleak,” Lanning said. “You have to have patience and perserverance.”

Ultimately, the bill also will have to have votes.