The Vikings stadium bill is becoming a primer in the legislative process for all those people who didn’t pay attention during their high-school civics class.

Among other things, the ongoing stadium debate is offering Capitol onlookers a refresher course in several political realities — that no legislative committee is necessarily benign, that there’s no free ride for controversial legislation and that things aren’t always what they seem.

And we’re seeing that legislators can oppose the very things they support — and that fiery television interviews can force leaders to take actions they don’t want to take.

Through it all, though, students of Minnesota legislative politics are seeing the importance of staying calm in the midst of political storms.

She clearly was blindsided Wednesday by Sen. Sean Nienow, R-Cambridge, when he offered an amendment that would replace charitable gambling (electronic pull-tabs) with racinos as the state’s funding source for its share of the stadium.

Nienow, a stadium foe, clearly was attempting to strangle the whole stadium deal with the amendment.

The move came at the end of a Senate Finance Committee meeting that ran for more than six hours. It followed maneuvers by another Republican foe of the measure, Sen. David Hann of Eden Prairie, who tried to throw up all sorts of other roadblocks that would have killed the deal.

“It will stop the bill,” Rosen said, attempting to understate her shock and disappointment with the racino addition as she spoke to members of the committee.

She explained that her House counterpart, Rep. Morrie Lanning, opposes racinos and supports charitable gaming. And she noted the Indian tribes’ adamant opposition, which would take away DFL votes for the bill.

Much as she, too, likes racinos, Rosen said, the move will kill the deal.

The racino amendment, which would allow slot machines at the metro area’s two racetracks, came out of nowhere and sidetracked the stadium bill’s progress. The Senate Finance Committee was expected to be a relatively easy stopover on the bill’s legislative journey.

But the amendment passed because the finance committee chair — Sen.Claire Robling, R-Jordan, a stadium supporter — also is a huge racino supporter. Rather than siding with Rosen, as she had on virtually every other matter Wednesday, she supported the racino amendment, after it was watered down by an old pro, Sen. Keith Langseth, DFL-Glyndon. 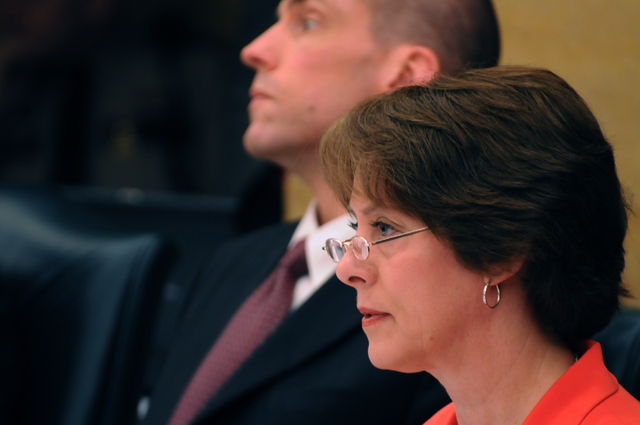 Langseth offered an amendment to Nienow’s amendment, proposing that the stadium bill should include both charitable gaming and racinos as funding mechanisms.

Don’t be confused, though. The Langseth amendment will make it easier to strip the racino measure from the stadium bill.

“It complicates things, but it [the racino provision] can be dealt with,” said Rosen after the committee session ended.

She worked hard to say everything with a straight face.

All of this is a reminder that things often aren’t what they seem at the Capitol.

For example, when Nienow proposed his amendment, Sen. Mike Parry, R-Waseca, nearly jumped from his chair he was so excited.

“Wow!” said Parry, a racino supporter. “I’m speechless [he really wasn’t]. I thought this [Racino] was dead in the water.”

He went on to say that one of his main campaign promises, a few years back, was to work for racinos.

Parry, like Nienow, voted for the amendment. But then, both of them voted against approving the stadium bill with the racino amendment.

Hmmm. Why would someone like Parry seem to vote two ways on one bill?

It’s hard to get into the minds of politicians, but it’s probably worth noting that Parry is in a knock-down, drag-out brawl with Allen Quist for the Republican endorsement to run against incumbent 1st District Congressman Tim Walz. Both Quist and Parry are trying to “out-conservative” the other guy, and the ultra-conservative crowd typically opposes a state subsidy for the stadium.

Another thing is becoming increasingly clear as the stadium bill bumps along: Leaders, especially Republican leaders, don’t have much control of their caucuses.

Which brings us to that fiery television interview.

Sen. Dave Thompson, R-Lakeville, is among those first-term legislators who have never felt compelled to keep their opinions to themselves. At the moment, Thompson has marginalized himself in his own caucus, a caucus he is not afraid to criticize.

Thompson sees himself as the new generation of small-government Republicans, unlike the old country-club Republicans who try to do things like pass stadium bills. In this case, Thompson did a TV interview blasting the Legislature – meaning his own leadership – for attempting to have the stadium bill bypass the Senate Taxes Committee.

Most legislators seem to think the Vikings bill still will pass. But these difficulties are creating agony for everyone.

Republicans, who wanted their tax reform proposals to grab some headlines, instead are having to expend energy and time on the stadium bill.

Remarkably, although it’s DFL Gov. Mark Dayton who has been the one strong voice for the stadium throughout the session, it’s the Republicans who now are stuck with responsibility for the controversial bill.  If they can’t pass it, it’s because they couldn’t round up votes in their own caucuses. If they do pass it, they have to own it.

And all the while, House Speaker Kurt Zellers, who seems to be working for the bill behind the scenes, still is trying to be coy.

Why won’t he take a position?

“From my perspective, that’s the best I can do for them as an advocate,” Zellers told reporters Wednesday. “If I were to say ‘yes’ or ‘no,’ there are people on both sides of the aisle who could use it for political advantage to kill the bill.”

Even civics majors might have a tough time understanding that.

DFLers, of course, are delighted to see the majority dangling over this political fire.

The DFL minority leaders, Sen. Tom Bakk and Rep. Paul Thissen, are promising they’ll deliver their proportion of votes. (Given the DFL’s minoritystatus , they say that it’s Republicans who must do the heavy lifting on the bill.)

Go back to Thompson’s television interview.

In the short term, at least, Thompson got what he wanted. Sen. Julianne Ortman, R-Chanhassen, responded to the criticism by announcing Wednesday morning that she indeed did want the Senate Taxes Committee to evaluate the stadium bill.

But Ortman has political problems of her own. At least two Republicans are attempting to wrest party endorsement from Ortman, and the stadium controversy doesn’t make her political life easier.

The Senate Taxes Committee is not considered Vikings friendly, although legislative leaders of both parties say they can get the bill through the committee.

Even  if it passes, it is another bump for the bill and another strain, especially for Republican Senate leaders. That strain was created by one of their own, a freshman, which longtime leaders won’t easily forget or forgive.

Stadium controversy overshadows all else

It is stunning how the Vikings stadium bill has become the defining bill of this session.

Yes, behind the scenes there remain ongoing negotiations between the governor and Republican leaders on other matters, such as a bonding bill (which the governor wants) and some sort of business tax deal (which Republicans desire).

But it’s the stadium that all are watching, much to the frustration of many legislators.

Unlike the Twins ballpark bill of the past, the Vikings stadium has not faced organized opposition, and Hausman believes she understands why.

“Citizens have just given up on us,” Hausman said. “They have become cynical. They believe that when money comes marching in here, there’s nothing they can do about it.”

Hausman fears that if this stadium bill passes, voter cynicism will grow.

But both Bakk, the Senate minority leader, and Steve Sviggum, communications director of Senate Republicans, say that something else has happened.

“I think the majority [of people] want this deal done,” Bakk said.

Sviggum put it even more strongly.

“I think the message most [legislators] are getting when they’re in their districts is ‘Get it done,’ ” Sviggum said.

But, especially in the final days of the session, that’s no easy task.