While lawmakers were meeting in the waning days of session, two separate Saturday rallies brought hundreds of citizens to the Capitol for very different causes.

Later in the afternoon, dozens of Vikings supporters lined the door to the House chambers and called on lawmakers to support the stadium bill.

Some lawmakers said on Friday that the anti-tax rally could derail the vote on the roughly $1 billion Vikings stadium because Republicans wouldn’t want to support a $398 million public subsidy with conservative voters at the door. The House postponed a vote over the weekend, and it’s unclear if or when it might come.

Gov. Mark Dayton and Republican lawmakers also are trying to come to an agreement on a bonding bill and on the GOP’s high-priority business tax relief measure.

But giant government spending projects likely wouldn’t have fared well among the staunch conservatives who stood outside the Capitol on Saturday. Shouting chants like “Kiss my tax!” and “End the fed!” the lively group heard from comedians, former Republican gubernatorial candidate Tom Emmer and candidates for the U.S. Senate.

One of the co-sponsors of the rally said days before it happened that it was meant to pressure Dayton and lawmakers into shooting down the bonding and stadium proposals. Phil Krinkie, president of the Taxpayers League of Minnesota, said people just want a balanced budget, not large spending projects.

When Cain arrived, the crowd lit up with cheers of “nine-nine-nine” — Cain’s signature tax proposal — and welcomed the former candidate from Georgia, who dropped out of the Republican race in December.

“Somebody said, ‘If it’s raining and cold, is anybody going to show up for the rally?’ You know what I said? ‘Hell yeah, they’re Minnesota. I knew you would be here!” he told the crowd.

Cain called for an end to the Internal Revenue Service and a completely new tax code. He also attempted to rally support for a Republican in the White House, although he didn’t mention front-runner Mitt Romney by name.

He told the crowd to organize and vote even if a favored candidate has dropped out of the race. To win back the presidency, he called on Republicans to forget about the contentious primary battle and unify.

“My favorite candidate isn’t there. Me! But I ain’t mad!” Cain joked. “The mission is to beat Barack Obama in November of 2012.”

Cain said he’s still working to unseat Obama despite being forced out of the race by “dirty, gutter, lying politics” — a reference to repeated reports of women complaining about Cain’s alleged sexual harassment.

“I’m still here, and I’m not going away,” he told the rally.

But as the Republican crowd melted away, the Capitol started turning purple. Vikings supporters trickled in over the afternoon and gathered in front of the House chambers where, earlier, it was thought there might be a vote.

Defying the conservative messages of just hours before, they called on lawmakers to support the stadium bill and to keep the Vikings in Minnesota. 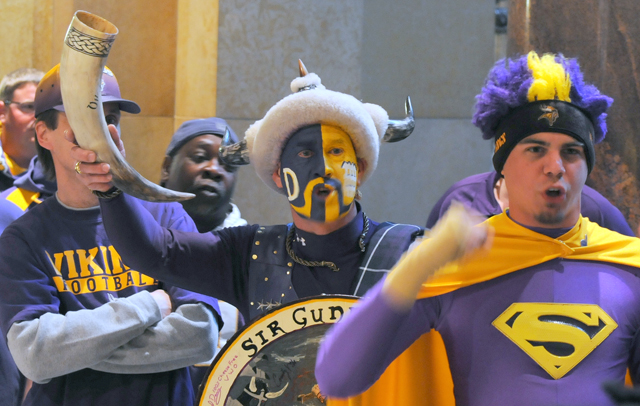 “Stay here, keep fighting, be loud and let everybody hear you, OK?” GOP Rep. John Kriesel told them. “I love it, and it is making a difference, I promise you.”

Cory Merrifield, founder of Save the Vikes, told supporters to be ready to lobby lawmakers before key House and Senate Votes. He also told the crowd to come back Sunday for votes that eventually never happened.

“What I’m asking you people to do is when legislators walk in … you let them know,” he said. “It’s now or never. Skol Vikings!”

The rowdy crowd — some dressed in full Vikings regalia — chanted, cheered and sang the Vikings’ fight song, which echoed throughout the Capitol halls. Some lawmakers chuckled and waved as they passed while others walked quickly by without acknowledging the purple crowd.

The stadium proposal, which narrowly survived a key committee hearing in the Senate on Friday, is still shaky. Republican leaders are hesitant to offer the votes, and say that a “global” deal on tax relief and bonding need to be reached in order to negotiate the Vikings stadium.

But some Minnesotans just don’t understand why the stadium is facing so much trouble.

“I just don’t see why they can’t get it going,” said Shawn Jensen, 30, a Vikings supporter from St. Paul who came to the Capitol on Saturday to rally for the team.

“I’d be pretty upset [if they left],” Jensen said. “I’ve been watching the Vikings … about 20 years now. It’s a tradition. It’s a part of Minnesota.”