With startling efficiency, a House committee last night approved the proposal for a new Vikings stadium in Minneapolis, along with a controversial funding plan.

Even though the Commerce and Regulatory Reform Committee began its meeting an hour late, Chairman Joe Hoppe, R-Chaska, shepherded the two related bills with a minimum of fuss and muss. One enables an expansion of charitable gaming, and the other authorizes the construction of the stadium.

Not that there wasn’t some doubt about the plan.

Up first was a bill that would allow Minnesota charities and the bars and bowling alleys with whom they work to market electronic pull-tabs and online bingo. In a last-moment move to get the charities on board — and to plump up revenues available for the stadium, legislators had added a sweetener: the right to sell sports-related tipboards.

The new gambling statute would produce an estimated $88 million in taxes, $36 million of which would go toward tax relief for the charities who have been laboring with levies that sometimes took as much as 50 percent of their net receipts. Subtracting that would leave enough to repay the estimated $42 million in annual bond payments for the stadium with a plump $10 million cushion.

That plan had been thrown into doubt earlier in the day, however, when Gov. Mark Dayton declared the tipboard scheme unworkable. “It’s my understanding that it’s illegal under federal law,” he said, alluding to a 1995 attorney general’s opinion that such a measure would not be able to overcome the federal government ban on sports betting. A court challenge would be costly and time-consuming, he added.

But King Wilson, executive director of Allied Charities of Minnesota, eager to move on the tax cut he and his members had labored so long to get, assured the committee that the tipboards could not be considered conventional sports betting that requires players to wager on one team or another. The Minnesota tipboards, in contrast, would have participants choose random numbers; they win if the numbers appear in the final score. “It does not matter who wins or loses,” he said.

And the usual suspects came forward to oppose the bill: Dan Weinberger, a recovering gambling addict, and later Tom Prichard, president of the Minnesota Family Council, a conservative church group. Again, among others.

Their messages to the Committee were similar: Find a resource other than gambling to fund the stadium. To pay off its bonds, said Prichard, the state “will be encouraging gambling and indebtedness.”

Rep. John Kriesel, R-Cottage Grove, who sponsored the bill, countered that his bill allocates 0.5 percent to the Department of Human Services for treatment of addicted gamblers. “We’ve tried to think of everything,” he said. 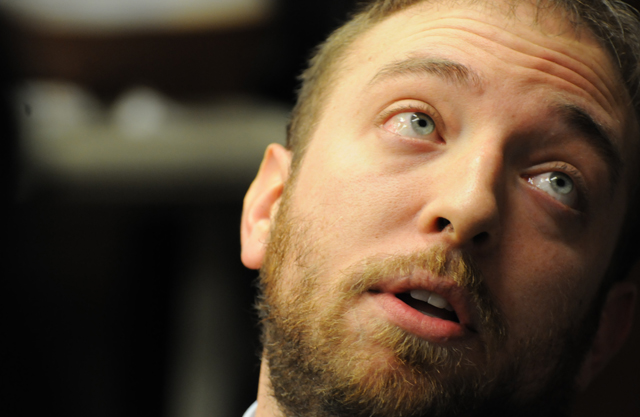 MinnPost photo by James NordRep. John Kriesel, who proposed a new method to funding the stadium, before his bill was heard on Monday.

One private citizen, Ed Kohler of Minneapolis, made perhaps the most effective attack on electronic pull-tabs and tipboards.

“There’s been a 20 percent drop in pull-tab play since 2004, a date which happens to coincide with the introduction of the iPhone. A further decline occurred with the opening of the app store in 2006. “People in bars would rather play with their iPhones than pull-tabs,” he said.

Legislators’ ears, in any case, screened out talk about the evils of gambling. Without questioning witnesses or any discussion, the committee passed the provision unanimously and moved on to the stadium bill itself.

Morrie Lanning, R-Moorhead, principal author of the House bill, ticked off the goals it had achieved: selection of a cost-efficient site, that is, at the conjunction of highways and public transit where the Metrodome now sits; agreement with charities on the expansion of gambling; and a back-up funding plan should gaming revenues fall below anticipated amounts.

And, he added, there would be no state-wide income or sales tax or use of general funds for the stadium (even though normally charitable gambling taxes would go into the general fund). “If we raise taxes, we know they have to go to other priorities,” he added.

The back-ups would be so-called blink-on, blink-off taxes. If, say, gambling revenues came to only $42 million a year, $36 million would have to go to tax relief for charities, leaving only $7 million to repay the bonds. Should that happen, the commissioner of Management & Budget would be authorized to “blink on” various taxes — first, a 10 percent tax on boxes; second, a sports-themed lottery; and third, the excess from Target Field revenues  normally used to pay down its own bonds early, but in this case would go to repay the stadium bonds. Finally, if all else failed, M&B could collect a 10 percent tax on all tickets.

Why is that the last resort rather than the first? asked one legislator.

The answer: The Vikings don’t much like the idea. Lester Bagley, vice president of public affairs and stadium development for the team, rose to testify in favor of the plan, all the while poor-mouthing about the Vikings’ sad financial state.

His case: The Metrodome is at the bottom of the NFL in revenues and also ranks lowest as an enjoyable experience among game-goers (though an occasional win, one would think, might soften that perception). The team’s $427 million contribution would be the third largest to construct a stadium of any other team; what’s more the Vikings would be paying a high annual rent. Subjecting the Vikings to a 10 percent ticket tax would be unfair, he insisted and not in the original deal that was negotiated.

Legislators and journalists had heard this story before, and Chairman Hoppe directed Bagley to wrap it up.

He faced one question from Sheldon Johnson, DFL-St. Paul, who asked why the Vikings should get revenue from naming rights to the stadium, rather than the state. His response seemed to satisfy: “We need that revenue to get to our level of contribution,” he said.

Several others appeared to testify against the stadium, most with unworkable plans to get local businesses to finance the stadium or somehow connect it with other airports.

The most substantive testimony came from Tom Goldstein, a gadfly, who wrote a story for City Pages contesting, for one, the number of jobs construction would create — not 7,500, as stadium backers contend. Calculating the hours needed for construction, he came up with a much more humble 680 full-time jobs over three years, each of which would cost about $400,000 to create.  “They will have only short-time positions,” he said.

Rep. Michael V. Nelson, DFL-Brooklyn Park, took exception. “There is no such thing as a long-term job in the construction trades,” he said.

Only one more objection came up.

What about the 1998 referendum Minneapolitans  had approved which required a vote for any sports facility costing over $10 million?

Mayor R. T. Rybak was summoned from the crowd, along with corporate counsel Susan Siegel, to respond. The money for the city’s $150 million share of the stadium would be coming from a state-imposed hospitality tax. The state would simply be retaining the money. Since the funds would never come into city hands, said Rybak, “it would not trigger a referendum.”

In conclusion, Lanning and Terry Morrow, DFL-St. Peter, the bill’s co-author from the other side of the aisle, pushed hard. Lanning threatened that if the Vikings left, the state would lose $20 million in income taxes, and Minneapolis would lose business from out-of-town visitors who make up  40 percent of game attendees.

Morrow upped the ante: “Over $800 million in taxes over 30 years would be gone if the team leaves,” he said. “And I believe the team will leave if this is not done.”

With that, Hoppe called for a voice vote.

Only a few nays arose from the group, and the bills were ready to move on to the Rules Committee.

Whether they have a future remains in doubt.  As of this writing, Rules has no meetings scheduled, and the Senate Committee on Local Government and Elections, where the stadium measure was tabled a few weeks ago, doesn’t have it on its docket either.