What a difference in tone a few hours made at the Capitol Wednesday where Vikings stadium politics continued to play out.

But after an hour-plus meeting with GOP and DFL legislative leaders, he was ready to temper those remarks — and his initially strong opposition to the plan, which called for an open-air stadium that would be “roof ready.”

“I’m not going to let my personal feelings about how other people conduct themselves get in the way of trying to get a resolution,” he told reporters. “My goal is to reach a solution.”

Even so, Republican legislative leaders emerged from the talks with few details or answers about their proposal — other than agreement by all sides that the plan likely would require a roof. (Later, the House released this overview.)

The “secret deal” that leaked out Tuesday would finance infrastructure-only improvements for the stadium. The plan calls for a state contribution of about $250 million, about a quarter of the near $1 billion project, House Majority Leader Matt Dean, R-Dellwood, told reporters.

It would use general obligation bonds — which Dayton objects to — to pay the state share of the stadium and would get tacked onto the existing bonding bill.

Dean, who did most of the talking on Wednesday, said that many of the details of the Republicans’ new proposal are in limbo.

He said nonpartisan staffers are still working on getting specific data about the state’s potential share of a stadium.

Dean did confirm, though, that the stadium would likely require a roof to be eligible for bonding — which, Dayton said, “puts us back in the realm of reality.”

That would also up the state’s portion of the cost.

Dean criticized reporters for spreading misinformation Tuesday about the half-formed plan, which quickly received outright rejection from Dayton and Minneapolis Mayor R.T. Rybak. He said reports of the plan got out in between meetings with House and Senate Republicans.

“Unfortunately somewhere in between, word of that discussion got out,” he said. “The discussions from yesterday kind of went off from there into many probably errant directions.”

The last-minute “switch” from charitable gambling revenue as the state’s funding source also caused Dayton and the DFL legislative leaders to pause. 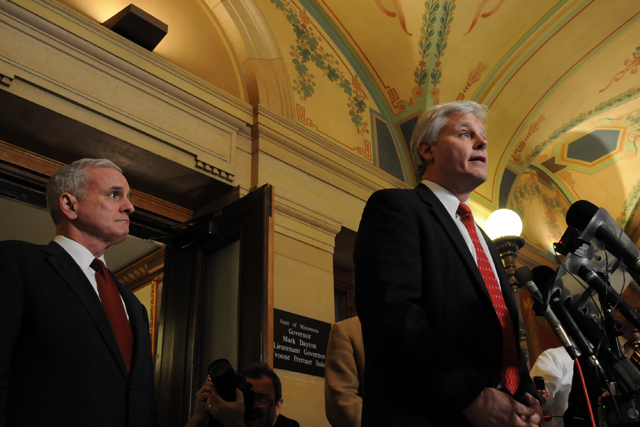 “There are some serious questions, I think, that need to be asked about their proposal,” Senate Minority Leader Tom Bakk said. “I think it’s awful late in the game probably to get some of those answers.”

Both he and House Minority Leader Paul Thissen had called for a vote on the original proposal, which they said was properly vetted through the appropriate committees.

That plan would use enhanced charitable gambling — electronic pull-tabs and linked bingo — to finance a state share of $398 million. The Vikings would be on the hook for about $427 million, and Minneapolis would contribute $150 million.

But the DFLers seemed resigned to dealing with the new proposal and didn’t appear confident that the established bills –- which they pointed out were authored by Republicans – would received a full floor vote before the session adjourns.

“We are where we are,” the governor said.” They’re in the majority. They control the floor.”

Dean was hazy on whether the new proposal would received committee hearings and said more likely it would just get tacked onto the existing bonding bill.

There are also questions whether the city of Minneapolis or the Vikings would accept the proposal, which Dean said were being addressed immediately.

‘We also need to talk to the Vikings to see if there’s an appetite to move forward with this as a possible solution,” he said.

House Speaker Kurt Zellers, who’s been tightlipped about how he would vote on the original proposal, had a meeting scheduled with Rybak Wednesday afternoon, a House spokeswoman confirmed. It’s unclear if there are other meetings scheduled.

With little time left in the session, it’s unclear where things go from here, but Dayton pledged openness to the proposal.