With voters headed to the polls May 8 to decide whether to amend North Carolina’s constitution to outlaw same-sex marriage, Minnesota groups working for and against a marriage ban here are getting a sneak peek at each other’s likely tactics.

Eleventh-hour TV-ad blitzes have become the norm in the 30-plus same-sex marriage campaigns held throughout the country in recent years. The first, a series of breathy, menacing ads created by arch-conservative communications strategist Frank Schubert, is credited with the come-from-behind win of California’s Prop 8 in 2008.

Both sides in the 8-month-old North Carolina campaign last week rolled out TV ads. It’s the first time Schubert’s handiwork has been seen in a while. And it’s the first time groups working to defeat a constitutional amendment have borrowed from his playbook.

It’s a sure bet Minnesotans on both sides are paying close attention. Schubert is the campaign manager of record for Minnesota for Marriage, the group pushing for the constitutional amendment, as well as the creator of ads seen here two years ago urging Minnesotans to elect a governor who opposes same-sex marriage and lawmakers to put a ban on the ballot.

No time to react

Because the ad campaigns typically begin so late in the election cycle, strategists have no time to react to new messages and instead are forced to anticipate the themes in previous efforts. The messages broadcast by proponents of same-sex marriage bans have proven effective in moving the voters pollsters refer to as “the squishy middle” and tough for opponents to combat.

A month before California voters were to vote on Prop 8, vote-yes forces aired a game-changing ad in which a pigtailed schoolgirl rushes to tell her mother she’d learned that princes could marry princes, and she could marry a princess. Unless the ballot measure passed, the narrator warned, her parents couldn’t object.

Another, a direct descendant of Lyndon Johnson’s infamous “Daisy” ad, shows a blond toddler in a party dress playing with male and female Barbies. Children’s music is the only soundtrack. At the end, the words “Marriage: It’s Simple” appear.

The vote-no campaign at first froze, then responded with a series of emotionally tepid ads trying to set the factual record straight. LGBT-rights strategists later determined that 500,000 of the 600,000 deciding voters were prepared to vote against the initiative until Yes on 8’s ads began airing.

Elements from the so-called princess ad have appeared over and over again in the four years since. By Maine’s 2009 amendment campaign, both sides had tweaked their messaging. Vote-no organizers rolled out warmer ads showcasing a variety of families and narrations suggesting Maine’s collective spirit wouldn’t tolerate discrimination.

In ads the following year targeting the Iowa “activist judges” who issued the decision legalizing gay marriage there, Schubert had broadened his message to suggest that gun owners’ rights and religious liberty were also in danger.

So far, North Carolina voters are being bombarded with four ads [the half-minute spots in this link]. The two created by the pro-amendment campaign include a spot that focuses narrowly on religious opposition to same-sex marriage and an ad that attempts to refute the other side’s ads.

The vote-no ads borrow from Schubert’s playbook by using what Ed Schiappa, chair of the University of Minnesota’s Communications Studies Department and a Prop 8 researcher, calls an “argument from consequence.”

“That is, the amendment could lead to bad and unintended consequences about which voters should be afraid,” he explained. “That is the same argument ‘formula’ that advocates of gay marriage bans have tried to use.” 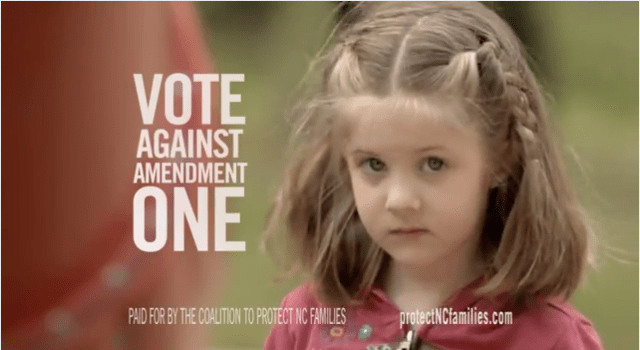 Opponents of North Carolina’s Amendment One are focusing on the law’s unintended consequences, like depriving children of unmarried couples of health insurance.

Schubert has said the Prop 8 ads were the result of polling that showed that many in the narrow band of voters who could be swayed on same-sex marriage believed that other people’s relationships had no impact on their own marriages. His communications firm then attached possible consequences — including the supposed lost parental rights — to a “no” vote.

In North Carolina, vote-no proponents’ ads feature a mother who worries her daughter will be denied access to her partner’s health care if the amendment succeeds and a straight woman whose protective order against a former boyfriend will become unenforceable. The countering vote-yes ad — which some critics say is misleading — is strikingly similar to un-engaging fact-checking ads run by amendment opponents elsewhere.

The “argument from consequence” may be easier for vote-no forces to advance in North Carolina, where the proposed ballot amendment would have the effect of invalidating heterosexuals’ domestic partnerships and civil unions along with any form of legal recognition for gays and lesbians. This has caused some prominent national traditional marriage advocates to come out against the proposed amendment.

Also interesting is the fact that the North Carolina ads in favor of the amendment prominently feature African-American couples. The national group that has financed many of the campaigns, including Minnesota’s, was recently forced by a court in Maine to disclose a number of documents.

Strategic goal of pro side shown

The documents, exhibits in a lawsuit filed by the National Organization for Marriage (NOM), outline a broad political strategy to “drive a wedge between gays and blacks,” “expose [Barack] Obama as a social radical” and even to ensure that the U.S. detention center at Guantanamo stays open.

“The strategic goal of this project is to drive a wedge between gays and blacks — two key Democratic constituencies,” one memo states. “We aim to find, equip, energize and connect African-American spokespeople for marriage, to develop a media campaign around their objections to gay marriage as a civil right; and to provoke the gay marriage base into responding by denouncing these spokesmen and women as bigots. No politician wants to take up and push an issue that splits the base of the poverty.”

Recent polls show that support for the amendment has softened notably among black North Carolinians in recent weeks. Some see it as an attempt to quash African-American support for Obama. Meanwhile, the president of the state’s NAACP chapter has made strong statements opposing discrimination in any form.

The North Carolina blitz is likely a small taste of what’s in store for Minnesota in any case. Some voters there have already cast early ballots in what as a primary election would typically see a low voter turnout. And spending is much lower than is expected here. The ads’ real purpose, then, may be to get out the vote among each side’s base.