The fate of Minnesota’s Voter ID constitutional amendment hinges on the November elections in more ways than one — and it could be procedurally defeated even if approved at the polls, according to some experts.

Democrats may get a final chance to soften the blow they say the measure would cause voters if it truly became part of the Minnesota Constitution.

Republicans will have to watch the gamble they took in deciding to bypass the governor and to leave the specifics of a Photo ID system to the next Legislature.

The amendment, which polls show highly favored by the public, would require voters to show a photo ID in order to cast a ballot. Despite highly publicized campaigns against Voter ID, many opponents seem resigned to the likelihood that it will pass.

But even if it does, it would be up to the next Legislature to fill in the statutory blanks of how the system would work, since the wording of the bite-size amendment speaks only in generalities.

That means a Democratic return to majority status in both the House and Senate in November — which some see as a possibility — could throw a wrench in the Republican works.

It’s unlikely that if they regained control, DFL legislators would pass anything like the bill Voter ID advocates are imagining.

MinnPost talked to a number of DFLers and Republicans active on the Voter ID issue to see how they think things will shake out.

The Democrats were understandably reluctant to talk specifics, and many insisted that they wouldn’t try to “weaken” the language if the amendment passes but, rather, would work to ensure that eligible voters have every opportunity to cast a ballot.

“If we are returned to the majority and this amendment passes, I think that you will see a legislative effort to enable the law that makes sure that everybody who is a legal voter has the right to vote,” House Assistant Minority Leader Erin Murphy said. “I think that will be a high priority for us.”

But the Republicans thought ahead.

Sen. Warren Limmer, who sponsored the Voter ID legislation that Gov. Mark Dayton vetoed in 2010, said Republican lawmakers had discussions this session about how to bind the next Legislature to their vision.

“We tried to be as careful as we could in giving direction to the future Legislature, provided that it may not be us Republicans in the majority,” Limmer said.

In a politically cynical world, though, it’s clear that Democrats would have the opportunity to block the Voter ID amendment from ever being enacted as long as they control one branch of government, according to elections expert and Hamline University law professor David Schultz.

And Dayton, of course, could veto any legislation passed no matter who controls the Legislature.

“In general, the Democrats potentially could just do nothing,” Schultz said. “Dayton himself, even if the Democrats don’t take back the Legislature, could just veto any enabling legislation, and it may turn out that that constitutional amendment is effectively dead.”

Schultz, an occasional MinnPost contributing writer, predicted that the Democrats would take back the Minnesota House because of redistricting shifts and the small number of votes that allowed narrow 2010 Republican wins that gave them control.

With a one-chamber majority, he said, the Democrats could theoretically block the enabling legislation from making it through the legislative process.

Because the amendment is not “self-executing,” it would essentially be on hold as long as that legislation hung in limbo, he said.

But Kiffmeyer and some Democrats, though, disagree with Schultz’s assessment and offer their own explanations of what they think could happen. 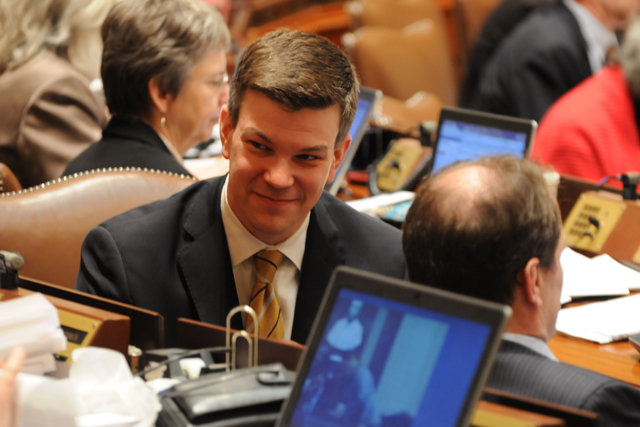 MinnPost photo by James NordDFL State Representative Ryan Winkler says that the will of the voters must be respected.

DFL Rep. Ryan Winkler, an attorney, said if lawmakers didn’t pass enabling legislation, legal challenges would force the courts to start weighing in to do the Legislature’s work.

“It’s kind of true in sort of a cute way [about stalling the legislation], but it’s not practically true,” he said.

Kiffmeyer, a former secretary of state, called the amendment “very self-executing,” meaning that much of it would operate even without enacting language. So voters would still be required to present “valid government-issued photographic identification” at the polls.

But there’s no clarity on how that system would work or what the future holds.

Regardless, DFLers said they’d respect the voters’ mandate if the amendment passes.

“You cannot have the voters go to the polls and approve something at the ballot and then ignore it. That is not acceptable,” Winkler said.

“The question is: How can you best interpret the language of the constitutional amendment so that you can enact legislation that preserves the public’s intent while at the same time making sure that people are not denied access to the ballot?”

Back to the original premise: If Democrats control the Legislature — and we take them at their word that they won’t hold Voter ID prisoner — what would it look like?

First, Schultz said, they can negotiate tough to “really take the teeth out of Photo ID.”

Murphy, who is helping with House candidate selection, stayed on message while discussing the possibility of a DFL takeover. She refused to say Democrats would “weaken” the language and said they would act only to ensure that “unintended consequences,” such as voter disenfranchisement, wouldn’t occur.

A frequent fear among Democrats and the Dayton administration is that Voter ID will disenfranchise such at-risk voters as students, the elderly, the disabled and the poor.

There are also concerns that the amendment could end Election Day registration and create a financial barrier for lower-income voters to get the proper documentation to apply for a free ID card.

“I would think that my colleagues and I will be interested in providing as much leeway as possible for being able to use various forms of identification,” said DFL Sen. Katie Sieben, who was a vocal opponent of the amendment on the Senate floor.

“It’s going to be very, very difficult to come up with some sort of legislation that doesn’t disenfranchise eligible voters,” she added.

Winkler offered a specific legal procedure that he thought Democrats could use to provide that leeway: signing an affidavit, instead of providing an ID during provisional balloting.

If the Voter ID requirement passes, federal law requires that Minnesota implement a provisional system that gives voters the chance to cast a ballot but requires them to come back later with the proper identification. In some states, voters can certify a provisional ballot with a signature, and Winkler said in his interpretation, the amendment would allow for something similar.

Legal challenges likely even before vote

That disagreement is apparent in the legal challenges that are popping up.

Minnesota Common Cause and the American Civil Liberties Union said in April that they’d be filing a lawsuit to take the question off the ballot. Winkler said there also would likely be lawsuits from both sides clarifying the amendment’s language.

“I don’t see any way to avoid that,” he said. “That’s one of the problems with this amendment — that it just opens up a can of worms by putting these vague words in the constitution about an election system when there are two sides locked and loaded and ready to fire at anything that looks like it would violate the constitutional language.”

Could Photo ID be scuttled even if Minnesota voters approve constitutional amendment?