That means supporters of a new Minneapolis stadium for the Vikings will finally get the full floor vote they’ve been asking for — Monday in the House.

Even so, there’s no guarantee the votes are there in either the House or Senate to approve the controversial project.

But the vote will be on the original funding plan that relies on expanded charitable gambling to fund the state’s portion of the nearly $1 billion project.

House Majority Leader Matt Dean, the main force behind the proposal, said on Wednesday that the plan would likely require a roof in order to be eligible for bonding as a general-use public works projects. That initial complication with the bonding proved to be a harbinger of what was to come.

Dean said it became apparent during Wednesday talks with the Vikings, the governor, Republican lawmakers and the city of Minneapolis that his proposal was “really too difficult with the agreements that were in place.” 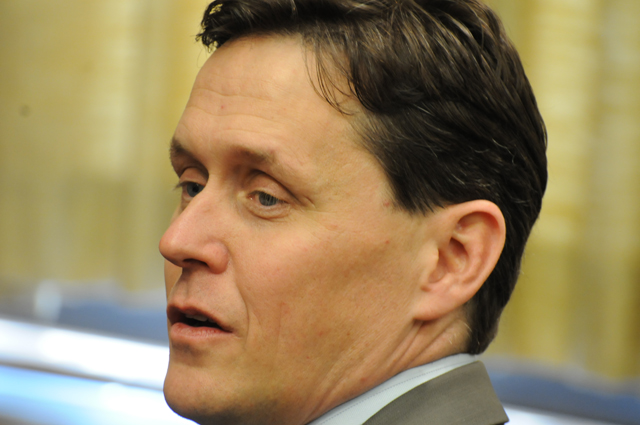 “I put my shoulder to the wheel for a couple days, and we took our best shot and we had an earnest effort, a sincere effort to try to get there,” he said. “But also in that same vein, we want to carry forward with something that will work.”

He dismissed the apparent tense relationship between Republicans and the governor over the past week, saying, “There was a lot of misperceptions that it was somehow a political stunt or meant to derail a vote of any kind, but I think once [the governor] heard what we were thinking about and saw the logic in it, that it made sense to him.”

But that didn’t distract from the logistical problems with the plan.

Republicans Rep. Morrie Lanning, the original House stadium sponsor who was also involved in the meetings, said that Minnesota Management and Budget, which oversees state bonding, canned the proposal during the talks.

“It was just too complicated and too difficult, and so Minnesota Management and Budget made the decision,” he said. “It was their decision that this didn’t meet the test.”

Lanning and other stadium supporters, including Dayton and House Minority Leader Paul Thissen, are happy the plan will even get a vote.

“I think that’s important, and I’m glad that they’re going to be working with us on putting together a bipartisan bonding bill,” Thissen said.

Dayton, too, weighed in. “I ask all Minnesotans, who care about the stadium, to contact their legislators and urge them to vote “Yes” next Monday,” the governor said in a statement.

But it’s unclear if the measure will pass. Thissen pledged 34 DFL votes—half of those required in the House—for the bill, but Zellers said he was unsure if there are enough supporters in the Republican caucus. Further complicating things, both Dean and Zellers said they’ll vote against it.

“I will not do anything to stand in the way of our members,” Zellers said while offering his opposition to the stadium bill.

The speaker also criticized Dayton for being “disrespectful and dismissive” to GOP lawmakers and proposals this session while focusing almost exclusively on the stadium. He said that there might be more Republican enthusiasm for a stadium if the governor hadn’t vetoed so much legislation containing GOP priorities, such as lawsuit reform.

“The stadium absolutely, unequivocally is the governor’s No. 1 priority, his only priority this session,” Zellers said.

Dayton, for the record, has said that jobs—including the stadium construction work—have been his top priority.

The alternative stadium financing plan, which leaked out on Tuesday, caused an uproar at the Capitol. Originally, it called for the state to provide infrastructure-only support for a “roof-ready” stadium.

Dayton, the Vikings and Minneapolis officials initially opposed the GOP plan, which would have lowered the state’s share of the stadium to $250 million plus the cost of a roof.

The governor blasted the proposal Wednesday morning before meeting with the Republican leaders. Afterward, though, once there was agreement on the need for a roof, Dayton agreed to at least investigate the proposal.

That left the original stadium bills authored by Lanning and Sen. Julie Rosen in limbo.

That plan would use enhanced charitable gambling — electronic pull-tabs and linked bingo — to finance the state’s share, which totals $398 million. The Vikings would contribute about $427 million, and Minneapolis would put in $150 million.

The stadium debate has been a mess throughout the entire session, and this week’s developments serve as a perfect example.

First, there were controversial amendments in committee hearings meant to kill the bills. Then there was the completely new proposal that blindsided even the original authors.

And throughout the session there have been omnipresent Vikings fans, some of whom proved overzealous and ended up alienating some lawmakers.

On Thursday, Viking fans and stadium supporters joined union workers to flood the Capitol by phone and in person to push for passage. They lined the door of the House chambers and cheered for lawmakers as they walked past.

“We’re totally all in. All in is an understatement,” said Scott “Skolt” Asplund, a supporter from Maple Grove. “We’re here to get this done. The Vikings are too valuable to us as a state.”

Asplund wore purple camouflage pants, face paint and a Vikings hat. As children touring the Capitol walked past him up the stairs, the super-fan gave each one a high-five, complimenting the kids, who happened to be wearing Vikings jerseys.

Both Asplund and his friend Greg “Sir Odin” Hanson said they would fight to the end for a new stadium to keep the team in Minnesota. Hanson, dressed as a more traditional Viking with furs and a horn, said he wouldn’t know hundreds of friends without the team.

“I have this huge extended family that wouldn’t exist except for the Vikings,” said Hanson, who has driven to the Capitol five times from Watkins, Minn. “Do I want to give that up? Hell no.”

They said lawmakers should support building a new stadium because it would create jobs and help tourism. They also offered a warning to legislators if the measure fails to pass.

“I will tell you straight up that there will be repercussions” in November, Hanson said. “We will raise some unholy double heck. It will be remembered. If we lose this team, there is going to be some serious anger.”