Forgive the women who haven’t jumped into the political brawl over their votes this year. They’re probably too busy — or, too tired.

Women outnumber men in Minnesota’s workforce, and 80 percent of the state’s women with children hold jobs outside the home too, according to a report by the Women’s Foundation of Minnesota and the Center on Women & Public Policy at the U of M’s Humphrey Institute.

Those stats are just the beginning of the story behind the political jousting for women’s favor on Election Day.

It is a story of two gender gaps: one political and one economic.

The two gaps intersect at the voting booth in ways that are complex and somewhat surprising, said Prof. Kathryn Pearson, a political scientist at the University of Minnesota.

Headlines have focused on the so-called “mommy wars.” Does first-lady hopeful Ann Romney understand the plight of mothers who can’t afford to stay home with their children? And wasn’t it wrong for Democratic strategist Hilary Rosen to say that Romney, who stayed home raising five sons, had never worked a day in her life?

Then there was the birth-control brouhaha. Conservative talk-show host Rush Limbaugh called a Georgetown law student a “slut” after she advocated for a federal rule that would require employers, including most religiously affiliated institutions, to cover birth control as part of their health care benefits. (Limbaugh later apologized.)

And there are dustups in Minnesota and many other states over new abortion restrictions such as the bill passed by Minnesota’s GOP-controlled Legislature requiring a doctor to be present when a woman swallows an abortion pill. (Gov. Mark Dayton vetoed the bill on April 30.)

“It doesn’t mean those issues aren’t important in mobilizing the political bases and also affecting some swing voters,” she said.

But, while caring about those issues, women voters are motivated by even stronger concerns about the economy, health care, the social safety net, the deficit and peace on Earth.

Supporting evidence comes from a poll conducted in February by the Kaiser Family Foundation.

The economy scored as the top issue women hoped to hear discussed on the campaign trail. Fifty-eight percent of the women ranked it over all other issues.

In other words, there are no apparent big differences between men and women on most policy priorities. You have to look deeper to find the fundamental differences defining the political gender gap – and to see how it links with the economic gap.

First, let’s acknowledge the obvious: Women do not vote as a single-minded block. Often as not, women find themselves taking aim at each other across political battlefields. Even among white women, there is a significant split in a match-up between President Obama and presumed GOP nominee Mitt Romney, according to a poll conducted in March by the Pew Research Center. White women ages 18 to 49 favored Obama over Romney (52 percent to 45 percent) while those over age 65 preferred Romney (54 percent to 43 percent for Obama).

A role for government

Still, Pew declares that there has been a measurable gender gap in political preferences: “Democratic candidates have gotten more support from women than men for more than 30 years.”  The gap benefited Bill Clinton in 1996 when 54 percent of the women voted for him compared with just 43 percent of the men.

Women also helped boost President Obama into office in 2008, giving him 56 percent of their votes, while Sen. John McCain won just 43 percent. Minnesota women followed that national trend with 57 percent of those who voted choosing Obama, according to exit polls cited by the Star Tribune.

Pew offers some hints: “For more than a decade, women have been more likely than men to favor an active role for government. And recent surveys show that higher percentages of women than men say that government should do more for the poor, children and the elderly.” Further, women are far more likely than men to say that government regulations should be strengthened in matters such as workplace safety, health and regulations on food production and packaging.

What’s intriguing this election year is the fact that the gender gap closed considerably during the 2010 mid-term elections. Women, particularly married women with children, helped Republicans take control of the Minnesota Legislature and the U.S. House of Representatives.

The gender gap “all but disappeared” in some races that year, Pearson said, and “that was quite important for many Republican victories.”

Turnout was a factor. Some Democrat-leaning women stayed home.

But many other women cast their votes in an urgent bid to get the economy back on track.

No wonder women are so worried about economic recovery and caring for vulnerable people living in poverty or close to the edge. They are far more likely than men to be financially vulnerable.

From a macro view, that doesn’t make sense because women seem to be doing things right more often than not.

Indeed, all the way through the Master’s degree level, Minnesota women edged out their male counterparts in educational attainment. The national picture is largely similar.

Women also turn out to vote at a slightly greater rate than men.

Median earnings and pay gap by sex and occupation 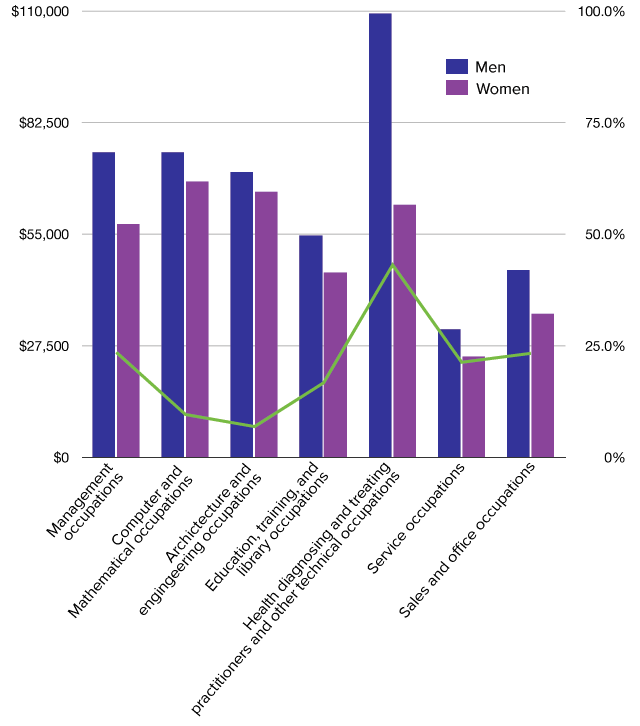 Even after adjusting for the fact that many women work part-time, they earn far less than men. In Minnesota, men who worked full time year around collected median pay of $37,818 compared with $25,347 for a woman, according to Census Bureau data for the five years ending in 2009.

A college degree didn’t typically erase that gap, according to the Women’s Foundation report.

The Great Recession sometimes was called a “Mancession” because it hit early and hard in construction and manufacturing, industries where men dominate the workplace.

Half of the state’s working mothers now are the primary breadwinners for their families, a 27 percent increase over two years ago.

“Their responsibilities within their families increased at the same time women continued to face a difficult balancing act, remaining primarily responsible for their homes, . . . and the pay gap continued,” she said.

As the recession wore on, women took bigger hits – in public employment, for example, where women depend more than men on the jobs, she said.

To boot, many women lost their houses.

“Minnesota saw a 27% increase in the number of homeless families — mostly led by women — from 2006 to 2009,” said the Women’s Foundation report. “Sixty-three percent of the state‘s homeless young adults (18-21) are women; this group saw the largest increase at 57% over the same time period.”

By another measure, women still struggle to win leadership positions – from school boards to corporate executive offices. Minnesota has yet to elect a woman governor. More than half of the state’s county commissions do not include a woman, and only 37 percent of the state’s school board members have been women, according to the Women’s Foundation report.

Such are the burdens women will carry to the polls this election year.

It would be reasonable to say that women will respond by voting in their best economic interests.

But there are different perspectives on how you get to a person’s best economic interests, Fitzpatrick said.

“A low-wage working woman might buy into the theory that tax cuts are going to create more jobs,” she said.

That’s one way to interpret the fact that the gender gap closed so dramatically in 2010.

“But another woman might buy the theory that government needs to play a bigger role,” she said.

That’s apparently what has happened in most elections since the 1980s.

Meanwhile, given the early campaign emphasis on contraception and abortion, it’s not a stretch to say that many women voters could translate those arguments into economic issues too.

“The fact that women have been able to control their reproductive lives has helped them advance in the workplace,” Fitzpatrick said. “There is no question about that.”

That’s why it surprised Pearson, the political scientist, to see Republicans drum up contraception/abortion issues during their primary election season. The economy, more narrowly defined, is the issue that concerns women in both parties and independents too.

“It is mystifying to me why the focus has not been like a laser beam on the economy,” Pearson said.