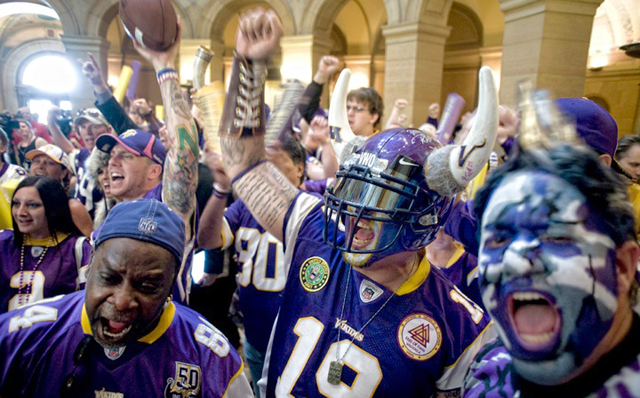 GOP Rep. Morrie Lanning performed an impressive political dance in the state House Monday night, and he triumphed. At least for now.

But the deeply divisive Vikings stadium bill – which Lanning authored and shepherded through the House with decent support after roughly a dozen changes – could be in a more tenuous political position than ever.

The $975 million stadium proposal’s passage by the House was a key political victory for supporters of the bill, which faced resistance from Republican leaders  and a gloomy outlook as late as last week.

Intense lobbying from Gov. Mark Dayton and stadium proponents – including a healthy contingent of fans and union members — over the weekend appeared to work some magic with the House. It passed the bill late Monday 73 to 58 after roughly eight hours of debate. DFLers produced 40 votes, while Republicans delivered 33.

Despite the initial victory, stadium supporters are nonplussed where the bill will go politically from here. An amendment to the bill that would require the Vikings to cover roughly $100 million of the state’s proposed share of the new stadium essentially nullifies the agreement that stadium supporters had worked out with the team separately. It also caused Lester Bagle, Vikings vice president of public affairs and stadium development, to pause when asked about future negotiations.

“The amendment that went on … is not workable,” he said, noting vaguely that there’s still time for more haggling. He refused to specifically indicate whether the Vikings would accept paying more than their initial $427 million share of the stadium.

Lanning’s job on Monday was to ensure the measure survived a floor vote, which he did. But he had to appease just about every element of both caucuses (except for the most conservative House members) as he faced bipartisan opposition to the bill.

They were “very difficult negotiations,” Lanning said after the vote. “A lot of forces … are at play here, and you’ve got a lot of people to satisfy.”

House leaders said it’s likely the Senate will take up the bill this morning.

That makes a clear next step. But nobody knows what the bill will look like when it comes out of the Senate, where it might end up after conferees hammer out the two houses’ differences or how the Vikings will weigh in. Not to mention that time this session is running out.

“That makes it sort of 3D chess … because what happens if, we, meaning the House conferees and the Senate conferees, we finally put the jigsaw puzzle together and we figure out the perfect plan and the Vikings say, ‘We can’t do it,’” DFL Rep. Steve Simon said before the floor vote Monday. “I mean, that’s a possibility.”

Rep. John Kriesel grinned when the final vote showed the stadium had passed out of the House. Lawmakers gathered around the first-term Republican and congratulated him for his hand in the bill – crafting its funding mechanism.

He looked giddy and walked out of the House chambers to a cheering crowd of Vikings fans.

Kriesel – a staunch stadium supporter – also stood behind an amendment from Rep. Pat Garofalo to shift some of the state’s costs back to the Vikings. 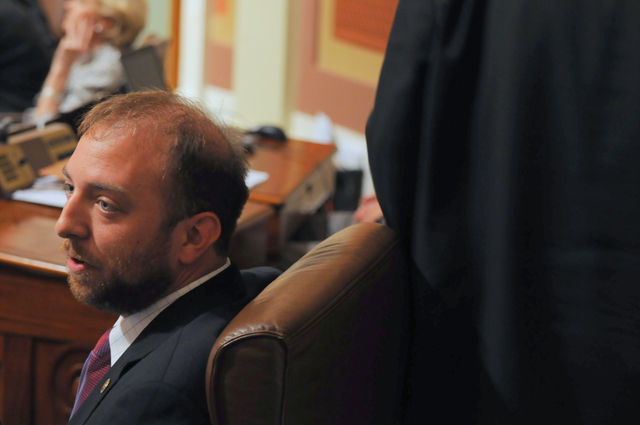 The original agreement between the team and lawmakers would have used enhanced charitable gambling — electronic pull-tabs and linked bingo — to finance the state’s share, which totaled $398 million. The Vikings would have contributed about $427 million, and Minneapolis would put in $150 million.

While the funding source remains in the proposal, Garofalo’s amendment ups the Vikings’ share to $532 million and lowers the state’s portion to $293 million. Minneapolis is still on the hook for the same amount.

That amendment in particular – one of roughly 40 proposed – throws “sand in the gears,” as stadium supporters like to say.

Bagley carefully worded his disappointment in the proposal and refused to let on how the team would react other than to say it would continue to work with lawmakers, especially those in the Senate.

Dayton was more blunt. “It’s a lot of money,” Dayton said. “It’s not ideal, no question about it.”

Lanning’s disappointment with the fiscal recalibration revealed the challenge he faced: He was forced to pass it out of the House to keep the proposal alive while making sure the legislation remains viable for each stakeholder through three more votes.

“That was very disappointing because we were led to believe that the Garofalo amendment would shake loose some votes,” Lanning said,“but that didn’t materialize, so we’ll have to sort through that.”

Of the many amendments proposed in the House, about half weren’t adopted. They ran the gamut from ultra-liberal (requiring the stadium to be carbon neutral) to Tea Party-esque (eliminating prevailing-wage requirements or implementing “right-to-work” provisions for the project).

The amendments reflected varied factions’ positions on the stadium that crisscross party divisions and moral positions.

Some members who offered amendments, like Simon – who successfully added a “clawback” mechanism if the owners decide to sell the Vikings – said they were attempting to improve the legislation.

“I think [the clawback language] makes it a much better bill because it gives Minnesotans a long-term financial interest in the longevity of the team,” said Simon of the provision, which would give the state 25 percent of the profits if the Vikings are sold within a certain time frame.

Others amendments stemmed from objections to expanding gambling and the societal problems gambling brings.

GOP Rep. Mike Benson failed to get approval of a measure that would have removed the gambling funding source and replaced it with a 9.98 percent user fee on game tickets, suites and memorabilia.

“I will not compromise on the gambling,” he said on the floor. “Talk about a regressive tax.”

Simon said many of the amendments were likely offered to beef up the House position for negotiations with the Senate.

“This is about loading it up with stuff that puts us in a position to negotiate from strength in the conference committee,” he said. “That’s really what this is about.”

But Kriesel said others were likely offered to tank the bill.

Supporters of the stadium successfully fought off two attempts to amend the bill by the more conservative element of the Republican caucus. One, from Rep. Keith Downey, would have eliminated prevailing wage requirements for contractors. The other, from Rep. Doug Wardlow, would have implemented a “right-to-work” rule for “those seeking employment in connection with the facility.”

They were both defeated handily.

“It’s a game,” Kriesel added later. “In the end, you can look at the people offering a bunch of amendments, trying to really change the bill, and still a lot of them are going to be voting no, and then you know what their motives were.”