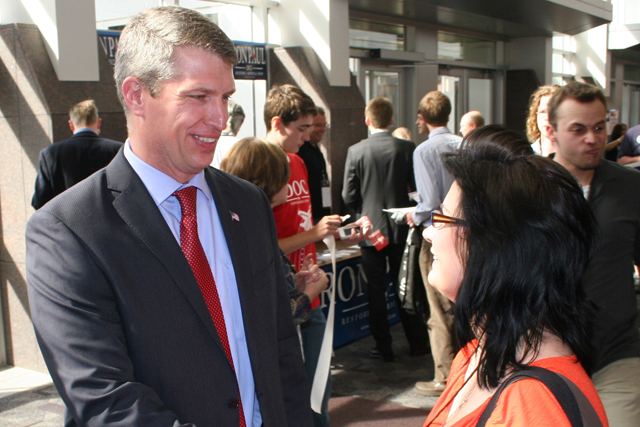 MinnPost photo by Brian HallidayState Rep. Kurt Bills speaks with a delegate before the convention.

ST. CLOUD — In lightning speed for a political convention, Rosemount economics teacher Kurt Bills was endorsed Friday as the Republican candidate for U.S. Senate on the second ballot at the Minnesota Republican convention in St. Cloud.

Bills, a first-term state representative, prevailed with 64 percent of the vote of 2,100 delegates.

Within minutes after thanking his supporters, his family and his competitors, Bills was telling reporters of his plan for the days ahead. “I’m going to show up Monday morning for my advanced economics class,” he said. “After that we are going to riding this bus that will be touring around the state.” His theme, he said, is to bring “econ 101” to Washington.

U.S. Sen. Amy Klobuchar’s campaign responded briefly to the news. “Amy has always put Minnesota first and has a strong record of standing up for our state and getting things done. That’s what she will continue to do,” the campaign said in a statement.

Bills’ victory over former state Rep. Dan Severson and war veteran Pete Hegseth was also a victory for the Ron Paul campaign in Minnesota. They organized from precincts to the convention platform to elect delegates who supported Paul for president and Bills for Senate.

Those delegates were rewarded not only with Bills’ quick and decisive win but also with a visit from Paul himself. In his address to the convention Friday, he offered the delegates a choice selection of Ron Paul red meat.

“There’s plenty of people here who would like to see us end a few wars,” he told the delegates, who received him with the highest level of enthusiasm of the day. “It’s time to get busy, make a plan, get out of there.”

Bills, in his acceptance speech, hewed close to the Paul economic prescriptions, but he said: “These are not extreme views. These are the views that win… free enterprise, sanctity of human life. Washington needs a good dose [of these].”

Bills did not give specifics on his economic proposals other than to say he supports the ideas advanced by U.S. Rep. Paul Ryan, Republican from Wisconsin.

Despite the lack of details, Bills made it clear that unemployment and the federal deficit will be the focus of his campaign against Klobuchar. “Obmanomics,” is how Bills labeled the four years of the Obama administration, and “Amy Klobuchar has voted in lock step.”

Klobuchar’s popularity and multi-million-dollar campaign war chest are surmountable obstacles, Bills said. “I think we are going to raise millions of dollars, but we going to run a campaign based on a lot of volunteers and grass roots,” he said.

Bills is expected to announce a formal campaign organization next week.  His campaign chair, Keith Downey, state representative from Edina, said a structure would be announced with two to three days. And he offered some initial post-endorsement advice for Bills in the coming campaign: “Stay himself. Who Kurt is part of the reason he was endorsed today.”