ST. CLOUD — The Minnesota Republican Party that opens its state convention this morning in St. Cloud is a different party animal than it was in 2010.

It has $1.3 million in debt. The libertarian wing of the party, many of them young and new to politics, has replaced numerous traditional activists as delegates. Social media and independent expenditure groups are threatening the party system – DFL and GOP – as a useful political structure.

That backdrop sets the stage for three convention agenda items that will capture the interest of the general public. The first will be the most newsworthy. Today, probably by late afternoon, the Republican Party will endorse a candidate to run against incumbent U.S. Sen. Amy Klobuchar.

The three contenders — state Rep. Kurt Bills, former state Rep. Dan Severson and Afghan war veteran Pete Hegseth — each brandish endorsements, respectable war chests and loyal followers. But Bills holds the edge with delegates who have pledged their support to presidential candidate Ron Paul and who are now the dominant coalition. Bills’ supporters and detractors both predict he will get the endorsement, probably on the third ballot.

Noteworthy item No. 2 on the agenda will be the report of the party’s financial oversight committee. Some of the same Ron Paul delegates are strident critics of the party’s operation under former Chair Tony Sutton. The committee has acknowledged “misreporting… questionable decision-making… and lack of accountability” and will likely face direct and even barbed questions from the delegates.

On day two of the convention, Ron Paul supporters really get a chance to flex their muscle as the 2,000-plus delegates elect a slate to represent Minnesota at the national Republican convention in Tampa. Paul delegates have already claimed 20 of the 24 delegates elected from the state’s congressional districts. Three delegate slots automatically go to party officers. Another 13 national delegates are chosen on Saturday. With the force behind them, it’s possible — maybe probable — that 33 of the state’s 40 delegates will be pledged to nominate Ron Paul.

Mitt Romney, of course, will get the presidential nomination, so that begs the question: What do Paul supporters, specifically his Minnesota supporters, want as the end game? It’s not just a moment in the Tampa sun. Paul supporters want to control the infrastructure of the Minnesota Republican Party.

They’ve already taken the first step with leadership posts at the state Senate and congressional levels. Dominance in the selection of delegates to the national convention will solidify their position. The final frontier is to hold a significant number of seats on the party’s state Central Committee, the party’s center of power. 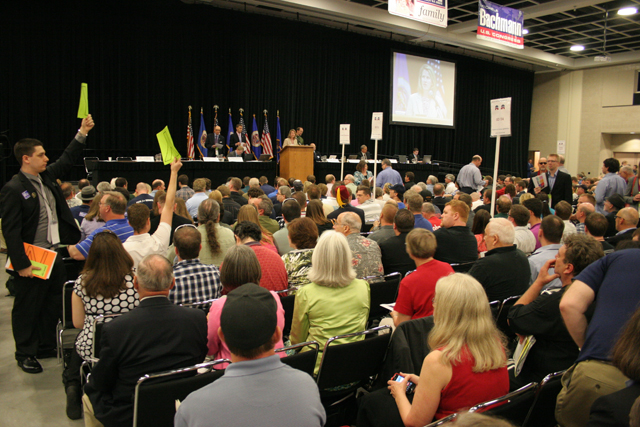 But given the competition of independent expenditures and campaigns that can leapfrog the party through websites and social media, the willingness of Paul supporters to stick with the party is uncertain. Critics point out that they are united more behind the libertarian vision of one man rather than a vision of conservative principles.

But in a political caucus system like Minnesota’s, a party takeover can start with a single cause and bloom into control if grassroots activists practice patience. It happened in the 1980s when social conservatives united in their opposition to abortion and drove out Republicans more moderate on social issues.

Ron Paul delegates persevered and gained through the 2012 caucus and convention cycle. They have delivered the delegates to St. Cloud and they have changed the Minnesota Republican Party, at least temporarily. If they stay with the party, they may pump energy, youth and money into a system that needs all three to survive.