The Vikings superfan has been attending legislative committee hearings, marathon floor sessions and Minneapolis City Council hearings for months, all in support of getting a new stadium for his beloved football team.

His — and other purple-clad, horn-helmed Vikings fans’ — dream came true on Friday when the Minneapolis City Council — the $975 million stadium plan’s final stop — approved using local hospitality taxes to fund the city’s share of the proposal.

“We finally won the biggest game!” Spooner nearly screamed outside of Minneapolis Mayor RT Rybak’s office. “We’ve never had this experience. We’ve always had the rug pulled out from under us. We’ve always been shafted by the refs or shafted by [Council Member] Gary Schiff … this is the first time that we can wake up, and we won!”

Supporters crowded into Rybak’s office after the 7-6 vote, a repeat of Thursday’s preliminary tally.

The full council voted to support a measure that would use hospitality taxes to begin funding their $150 million share of the stadium, plus renovations to the Target Center and Minneapolis Convention Center, once other obligations have been filled. Interest costs will drastically increase the city and state contributions.

The cheering Vikings fans streamed into Rybak’s office before the mayor had a chance to make his way inside. One purple proponent cracked a can of Grain Belt Premium, a “Minnesota beer,” and chugged it out of a drinking horn.

The fans crowded around Rybak to thank the mayor, but nobody was more vocal than Spooner.

“All Vikings fans have something for Mayor Rybak!” he shouted.

“It has been mentioned many times: people that pass this stadium bill would be treated as rock stars, OK? Right now, Mayor Rybak is ‘Rock Star Rybak,’ ” he said, passing the mayor an electric guitar trophy.

But during the morning debate, opponents of a public subsidy for private sports teams provided a much more sobering picture of what they said the stadium could do to Minneapolis and its residents.

They said continued use of city hospitality taxes would far outweigh any of the property tax reductions that Rybak touted when he shopped around the proposal.

Opponents also said that all Minnesota’s taxpayers should help pay for the team since proponents called it a “statewide asset,” and they contested many of the economic benefits that stadium supporters promised.

“This is too much public cost for not enough public benefit,” Council Member Lisa Goodman, a strong opponent, told her colleagues. 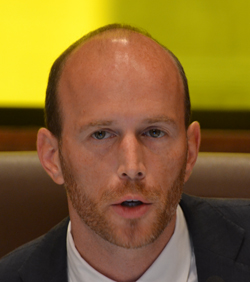 Council Member Gary Schiff, another vocal opponent, said the council should send the deal back to the Legislature so that it could be funded with another source, such as user fees. He said the city should address more pressing issues.

“We need a fair democracy,” he said. “We need more reasonable and more equitable economic investments. We need the energy that was put into this deal to be placed on the city’s real priorities. We need a blitz on poverty.”

Despite the choreographed opposition and the impassioned speeches, even the detractors knew they’d lose the vote before the meeting started. They’ve known it for more than a month.

So, with the opposition dispatched and the plan moving forward, what’s in the works for Rybak?

He now has to appoint two members to a sports authority and work with city officials to create an implementation board. But Rybak also said he’d take a breather.

“I feel, obviously, incredibly happy to have this over. This has been a bruising fight. I feel in my gut a little like I imagine the Vikings feel after a win. You’re happy you won, but you’ve got to go sit in the hot tub and take care of the bruises for a little bit.”

And, of course, there was one last rendition of “Skol Vikings!”