Erik Paulsen, who, as 3rd District congressman, represents arguably the safest Republican district in the state, has a challenger for the Republican nomination.

John Howard, a 24-year-old graduate of Edina High School and St. Olaf College, wants to take on Paulsen and, in particular, the Republican Party’s position on climate change.

Howard’s decision to run came after several frustrating visits to Washington with the Citizens’ Climate Lobby, a relatively new grass-roots organization with chapters in all 50 states.

“Nothing is happening at the federal level. The Democrats won’t do anything without Republican support. Republicans say there are more pressing issues,” he said. “Something has to be done about climate change, and if it has to be me, I was up for that.”

Howard’s campaign website is sketchy on specifics but does offer a resolution on climate change that supports renewable energy and reduction of fossil fuels.

Paulsen says he’s not familiar with Howard and that he expects several challengers once the Minnesota filings open.

But in a brief interview, he appeared to give Howard’s concerns due consideration.

“I’m a big conservationist,” Paulsen said, citing his attention to the Asian carp issue.  “But right now, the big issues are jobs and the economy.”

The economy is the dominant topic, Howard acknowledges.

“I’m concerned about the national debt. I think over my lifetime it’s quadrupled, and I’m not really all that old.”

But environmental degradation is just as big a threat, he said. He points out he’s no amateur on the subject. He has a degree in biology, a job as a permitting consultant for a small, civil-engineering firm in Eden Prairie and volunteers with such groups as Edina’s Energy and Environment Commission.

As for politics, Howard’s interest came young [disclosure: he was a boyhood friend of my son] and followed him to voting age as a regular caucus attendee.  He intended to seek the Republican endorsement but was told he had to sign a statement saying he’d drop out of the race if he weren’t successful.

“I wanted to go through party channels, but they discouraged it,” he said.

He is, he maintains, a real Republican. “I was a supporter of George Bush,” he said.  “As an environmental consultant, I see the ludicrousness of federal regulation. Government doesn’t necessarily have the answer.”

Youth is an asset, he says.  “The reason I stayed [a Republican] is that it’s important that the Republican Party not be out in left field,” Howard said. 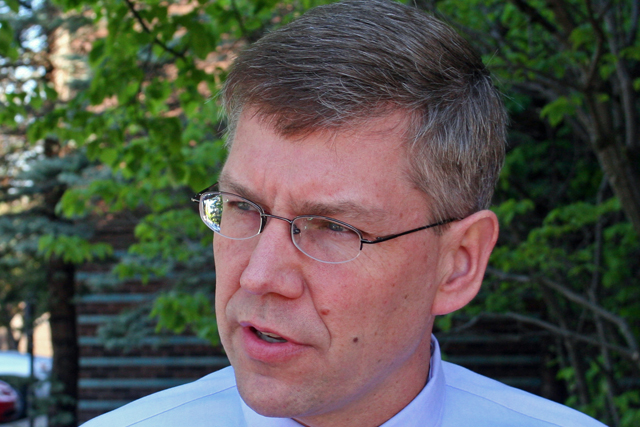 MinnPost photo by Brian HallidayRep. Erik Paulsen: “I think it’s incredibly important to have young people in the party.”

“I think it’s incredibly important to have young people in the party,” Paulsen said Wednesday. He made his comments about Howard just before he addressed a more traditional Republican coalition, senior citizens who came to the Minnetonka Community Center for Paulsen’s seminar on how to prevent identity theft.

Given Paulsen’s reputation as a hard-working politician, Howard is candid about his chances.  He met with the chairs of his Edina state Senate district who advised him of the amount of work involved in a campaign. “They wanted to make it very clear that it’s more than you can imagine and then some,” he said.

But at the risk of getting labeled a single-issue candidate so early in his career, Howard has his focus.  “I’m hopeful I can bring the issue of climate change into the Republican discussion.”