For the last several weeks, construction crews have been busy carving a trail out of the rugged terrain along the southern edge of Battle Creek Regional Park parallel to Lower Afton Road in Ramsey County.

The mile-long pathway constitutes the missing link in a paved trail that will extend from Century Avenue on the Ramsey-Washington county border to the entrance of Battle Creek park just off Hwy. 61. It will provide residents of St. Paul, Maplewood and Woodbury with improved access to multiple trails in the park, as well as a trail running under Hwy. 61 and along the Mississippi River to downtown St. Paul and points beyond.

“There will be a whole series of options for people,” says Greg Mack, Ramsey County parks director. “The project is one that we’ve had on the books since the 1980s.”

The $750,000 project, which should be completed by the end of June, is being built with the help of a federal transportation grant and sales tax dollars from the state’s Clean Water, Land and Legacy Amendment.

It is one of many projects being undertaken in response to the growing popularity of state and regional trails and the public demand for more, as well as increased pressure from health officials to provide more opportunities for active recreation.

Jeff Schoenbauer, a Minneapolis planning consultant who specializes in parks and trails, says trails increasing “have become a focus of the parks and rec world, and the health world.” Physical inactivity contributes to an estimated 200,000 U.S. deaths a year and is a major cause of rising obesity rates.

It’s not that state and regional agencies are abandoning their parks, which provide opportunities for swimming, boating, camping and other activities. Rather, they see trails as an additional way for people to engage in physical activity, experience nature and connect with parks.

The regional parks and trails system, of which Ramsey County is a part, now has 308 miles of paved trails (not including the trails within parks themselves). That’s nearly triple the number a decade ago. And the state has 25 trails with 620 miles of paved surface.

Trails are popular among people of all ages for activities ranging from walking and bird-watching to running, biking, in-line skating and horseback riding.

Ramsey County is not alone in its efforts to keep up with the demand for more trails.

Last year, Carver County celebrated the grand opening of its first regional trail – the Dakota Rail Regional Trail, which connects with the segment of the trail developed by the Three Rivers Park District. The Three Rivers segment is 14 miles long and runs from Wayzata to Minnetrista. The Carver County segment runs from Minnetrista to Mayer and is 12 miles long.  Carver County currently is constructing an extension of the trail west from Mayer to the McLeod County line that may open later this year.

The Three Rivers Park District has a well-developed system of 10 regional trails, including the popular Luce Line trail between Golden Valley and Plymouth. It also has been working since the late 1990s to complete a number of smaller trails that serve the first-tier suburbs.

At the state level, the Department of Natural Resources (DNR) is moving forward with the development of the 5.9-mile Brown’s Creek State Trail in the scenic rail corridor between downtown Stillwater and Grant. It formerly was home to the Minnesota Zephyr dinner train.

For some outstate communities, trails have become an important magnet for tourism and economic growth. One shining example: the 42-mile Root River State Trail, which has become a major drawing card for Lanesboro as well as other towns along its path.

“Everybody wants to be Lanesboro now – because the trail has been such an economic success story,” says Amy Barrett, a spokesperson for the DNR.

Barrett says the DNR and the Minnesota Office of Tourism believe the state’s trail system has the potential to attract more out-of-state visitors to Minnesota, and that they are working together to promote greater public awareness. 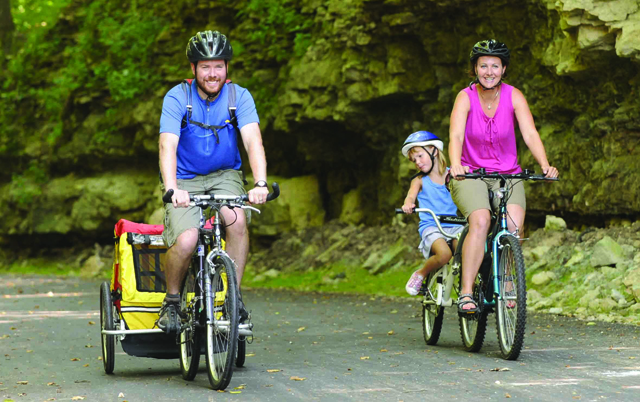 Courtesy of the Minnesota Department of Natural ResourcesA family biking on the popular Root River State Trail near Lanesboro.

She notes that Minnesota’s trails have been named the best in the country by American Trails, a national nonprofit group that promotes all forms of trails, and that Minnesota has been ranked as one of the top five bicycle-friendly states by the League of American Bicyclists.

The DNR also wants more Minnesotans to learn more about the state’s scenic, traffic-free, relatively flat, paved trails. Beginning May 19 and continuing through the fall, the department is holding a series of 17 guided rides on Saturday mornings on eight of the state’s 25 trails.

“After a busy week of work or school, bicyclists are invited to ‘shift gears’ and enjoy a change of scenery,” the DNR says.