EAU CLAIRE, Wis. — The county Democratic Party headquarters here occupies a ground-floor suite of offices in an old building on South Barstow Street, a narrow thoroughfare of quaint shops where parking is free and jazz music eases from loudspeakers on corner lampposts.

Across the street, Paul Gross owns a second-floor business, HSG/Code Blue, a thriving claims management company with another office in Springfield, Ohio. Gross couldn’t be a more passionate Republican. Now in his second term as county commissioner in Madison, Ohio, Gross and his wife, Kirsten, named their first three children Cheney, Reagan and Nixon.

About two weeks ago, Gross — fed up with seeing the letters R-E-C-A-L-L plus an exclamation point in the seven front windows of the Democratic headquarters — slapped Walker campaign signs on the row of HSG windows facing South Barstow, with a bunch more around the corner overlooking Main Street.

All the scene lacked was a wagging finger. Or maybe a different kind.

“I wanted to make a point — Scott Walker is good for business and good for jobs,” Gross said in a telephone interview earlier this week. “We certainly wanted to demonstrate the position that we’re doing the right things in this state.”

Gross boasted that he’s hired 25 percent more employees since Walker took office as governor in January 2011, a result, he said, of Walker’s pro-business policies. And Gross harbors no animosity toward the folks across the street.

Carolyn Dunning, a 70-year-old with short gray hair and the confident bearing one might expect from a retired teacher, has been the volunteer office manager at Democratic headquarters since it opened in 2005. She noticed Gross’ display about a week ago.

“I think it’s funny,” she said. “We’re pretty committed over here. I don’t think they’re getting any votes here.”

No doubt. Democrats see Walker as a union-busting fraud untrue to Wisconsin’s progressive heritage and were among those launching the movement to recall him.

In the last days before Tuesday’s election pitting Walker against Democratic opponent, Milwaukee Mayor  Tom Barrett, operatives on both sides agree that Wisconsin voters decided a long time ago whether to keep or dump Walker. Talking to voters in Eau Claire and Hudson this week, I couldn’t find a single undecided person — a decidedly unscientific sampling, yes, but telling nonetheless.

The recall election comes down to a replay of the 2010 election, when Walker beat Barrett by more than 120,000 votes.

A Marquette Law School poll released Wednesday found Walker leading Barrett 52 percent to 45 percent in a sampling of 600 people likely to vote. There’s a 4.1-point margin of error, but the results are similar to Walker’s advantage from the same poll two weeks before. And 92 percent of Republicans polled said they were absolutely certain to vote, compared with 77 percent of Democrats.

Moreover, with the race drawing intense national attention, Walker added $5.9 million in the last five weeks to a campaign stockpile totaling $31 million, mostly from out of state, according to the Associated Press.

Meanwhile, Barrett raised $3.4 million over five weeks. Wisconsin state law allowed Walker early on no limit on contributions as the subject of the recall, while Barrett faced a $10,000 ceiling on individual donors.

County Republicans took over an old TicketKing office in a corner of a strip mall in downtown Hudson behind the First State Bank and Trust on Second Street, the main drag paralleling the St. Croix River. Multiple phones rest on rows of tables with blue paper tablecloths. County Democrats, by contrast, rent a single room in a two-story office building a few blocks away behind the Bethel Lutheran Church. 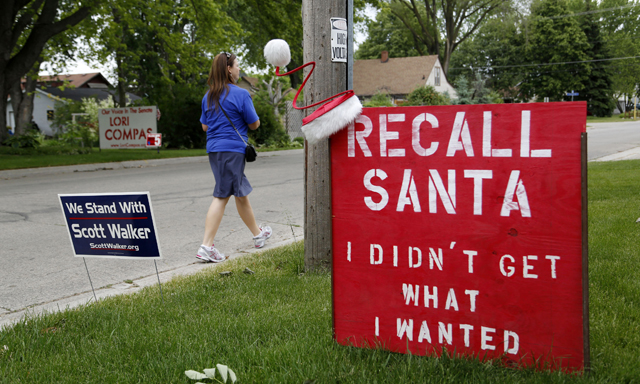 Retired Land O’Lakes executive Paul Bode, from Hudson, volunteers at the Democratic office on Tuesday afternoons. This week, he was alone as usual, answering phones. A sign on his desk suggested $5 donations for lawn signs and $2 for buttons. Republican, meanwhile, gave away almost 100 lawn signs at a rally Tuesday night at Lakefront Park Bandshell featuring Rep. Sean Duffy (R-Wis.) and state Sen. Sheila Harsdorf, who withstood a recall last year.

“I think everybody has pretty much made up their minds,” Bode said. “It’s going to be a matter of getting people out to the polls. I’ve even heard a few Democrats say they don’t agree with the recall process – let’s wait until the next election to put him out. Those are the people we really need to vote, or to get out and vote.”

In Eau Claire, Becca Dodbrez, a 23-year-old Chicago native with a political science and communications degree from Wisconsin, runs the local Barrett effort with volunteer help from retirees and tech-savvy twenty-somethings. Dodbrez has been so busy she never noticed the jazz music in the street until I walked her outside the headquarters and asked her to listen.

Dodbrez and senior volunteers train and organize folks to visit homes, pass out literature and leave placards on doors with precinct information. “I was pretty mad and pretty frustrated,” said volunteer Jackie Young, another retired teacher from Eau Claire. “I just felt it was my duty to help people get interested in what was going on.”

Young expects to knock on more doors this weekend. She may have help from Minnesota volunteers, such as Michael Madden, a locomotive machinist from Center City who staffed a phone bank at the Service Employees International Union (SEIU) Minnesota State Council office in St. Paul on Tuesday night.

The St. Paul Regional Labor Federation and Minnesota AFL-CIO are organizing bus trips to Eau Claire to canvass neighborhoods on Sunday and Monday, and Madden expects to make one.

Walker supporters will do the same. Don Vande Yacht ran a cheese business in Appleton until retiring and moving with his wife, Nancy, to River Falls to be closer to their three grandchildren. Now a volunteer for Walker, Vande Yacht was one of about 100 people at the Lakefront Park rally on Tuesday, and the only one waving a “Walker Rocks” sign.

“I’ve never done anything like this before,” he said. “I just got to the tipping point, I guess you might say.”

All this spending leaves plenty of Wisconsinites disgusted.

Jean Olson, a retired special-education teacher originally from Minneapolis, moved to rural Crystal Township (pop. 311) in northwest Wisconsin four years ago. She voted against Walker in 2010, but considers the recall a huge waste of money even though, as an election official, she gets an hourly wage plus mileage every day the polls are open.

“I don’t support Walker’s beliefs as far as union busting,” she said. “But I do believe he was elected by the majority of the voting public. Unless he did something illegal as determined by the courts, [the recall] sounds like backbiting to me. And who’s paying for this?”