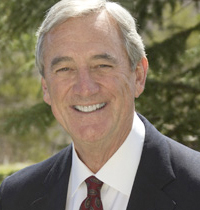 ROCHESTER — Late in the afternoon on Saturday, delegates to the state DFL convention here were growing weary.

They’d spent the day crowded together at long tables, applauding speeches by their elected officials and candidates, munching on snack foods and voting  “yea” or “nay’’ on a long list of insider resolutions.

Rick Nolan had seen his late-afternoon spot on the speakers’ lineup and winced.

“If you had to pick a spot to speak, this would not be it,” said the former congressman who is the DFL-endorsed candidate for the 8th District congressional seat held by GOP Rep. Chip Cravaack.

Nolan received polite applause from the crowd when he was introduced.

As he began his speech — without notes — the delegates were half-listening. But the longer he spoke, the more tuned in the crowd became.

“Who is this guy?” many delegates seemed to be thinking.

In short order, the crowd was with him. The old guy — the former 6th District congressman is 67 years old — can still rock ’n’ roll and move even a tired crowd.

Nolan, and the race he is in, will bring national attention and money to Minnesota politics this year.

First up is an 8th District primary that promises to be costly and intriguing.

Both of Nolan’s primary opponents opted to not make any sort of appearance at this convention.

Tarryl Clark and Jeff Anderson have meaningful bases of support as they approach the August primary.

But it is Nolan, who served three terms in the U.S. House (1975-1981) before deciding not to run again, who won the support of activists at district conventions.

This race has national implications because Democrats believe the 8th District seat belongs to them and that Cravaack’s stunning victory over longtime incumbent Jim Oberstar was a one-time fluke.

It’s understood by most that Republicans can fare well in the southern portion of the 8th, which includes the northern exurbs of the Twin Cities.

But there are even potential political changes in Duluth and the Range portions of the district that create some anxiety for DFLers.

Joe Begich, who was a state representative (1974-92) from St. Louis County, has been attending DFL conventions since 1952.

More shocking to Begich and some of his colleagues is that many of those younger miners find Cravaack “a pretty good guy.”

“They’re not paying attention to how he votes,” Begich said.

But they are paying attention to some contemporary issues that create a philosophical divide in the contemporary DFL.  That big issue — environmentalists vs. mining — came up again at this convention.

All of this means that whoever wins the Nolan-Clark-Anderson primary can no longer count on universal support from the lunch-bucket crowd that once-upon-a-time almost unanimously supported Democrats.

That there is going to be a highly competitive primary in the 8th will make it even more difficult to make Cravaack a one-term wonder.

After his speech, Nolan talked about the problems a primary presents.

Contrary to the prevailing belief that most voters don’t pay attention to politics during the summer months, Nolan believes that time is important for candidates to define themselves and their opponents. But this summer, the three Democrats in the 8th will be busy instead trying to round up support for their August showdown.

An even bigger problem, Nolan said, is that many contributors — including the national party — will not come forward with financial support until after the primary. Often, Nolan said, money comes too late to finance the sort of campaign that will be needed to take out an incumbent.

Meantime, he said, super-PACs, such as the Congressional Leadership Fund (which is headed by GOP stalwarts Norm Coleman and Vin Weber), are raising and spending millions of dollars. Some of that money, Nolan said, is already showing up in the 8th District.

“They’ve got trackers on me already,” Nolan said.

But trackers, who record every word in every speech of opponents, don’t seem to bother Nolan.  He will say what he believes, and he will say it with passion.

Nolan shakes at the carefully worded scripts of so many contemporary pols.

“They’re for access to affordable health care,” said Nolan, laughing. “There seems to be a conventional wisdom, ‘Don’t take a stand.’ Glittering generalities and a lot of money are what you need to get elected.”

But Nolan — who left politics and got into an array of activities, including a business (a sawmill and pallet plant in Emily) — never has been one for caution.

Drawn into politics because of his opposition to the war in Vietnam, he took the difficult step of supporting former U.S. Sen. Eugene McCarthy over former Sen. Hubert Humphrey in the great divide in Minnesota politics decades ago. (Ultimately, Nolan said, he and Humphrey became allies again.)

Will age and absence hurt Nolan?

His age and long separation from seeking elective office may have been negatives early in his campaign, but when audiences have heard him, heard the passion and seen the energy, age has seemed to become a nonfactor.

This ability to give an old-fashioned stem-winder speech is not new, according to such longtime politicians as Sen. Dick Cohen, a St. Paul DFLer.

“Always a great speaker, one of the best,” said Cohen.

In fact,  Nolan was so impressive on the stump that Cohen believed that the congressman would one day become “the next Minnesotan to become a national figure.”

Nolan, though, opted for a different route. He says the experiences away from Washington have prepared him well to be a more effective congressman.

“There are some advantages to age,” Nolan said.

(Um, all of us who have grown older have come to believe there are some advantages to age.)

Certainly, the years haven’t taken away from Nolan’s ability to rouse even a weary crowd.

On the other hand, one of the underlying beliefs of this convention is the need for the DFL to work harder to attract a new generation of supporters.

Rick Stafford, a party activist for 40 years and a former party chairman, spoke of the need “for generational change” in the party.

Stafford recalled that when he became involved in party activities, one of the most under-represented groups in the party were seniors.

“Seniors are now the most over-represented,” he said.

Stafford said the party structure needs to get younger and needs to become more diverse.

Others speak of how the party needs to hone its message to where the swing voters are: the suburbs.

All of these things – changing demographics, changing messages, environmental concerns vs. lunch-bucket issues – are issues in the 8th District, where the state’s major political story of the summer will play out.

There are real concerns on many levels for DFLers. Still, the speaker who woke up the crowd Saturday, had a booming, optimistic finale to his speech.

“The wind is at our back,’’ he told the cheering party activists.