RED WING, Minn. — It seems like everybody here likes — or at least respects — John Howe.

The charismatic freshman state senator can’t walk down the street without greeting a constituent, cracking a joke with a friend or stopping to pick up a windblown recycling container. Howe, the city’s former mayor, swept into office with the Republicans’ 2010 electoral wave.

But there’s a difference between Howe and many of the new hard-line Republicans who now make up a vocal minority of the Senate GOP caucus: Although he’s stuck to his principles, he’s also been willing to compromise, a rare practice for some Capitol politicians.

“Compromise shouldn’t be a dirty word,” Howe said when MinnPost visited him in his district recently. “It’s not about compromising your principles. It’s about standing with your principles and yet achieving a result that you can get done.”

Howe has partnered with DFLers – and pretty much anyone else — in an attempt to help shape several key pieces of legislation passed over the last two years. If not for the realities of political maneuvering, his efforts may have stuck — on the Vikings stadium bill, on Voter ID and on statewide tax policy.

Despite some backlash from other Republicans over his controversial positions, it appears Howe is headed for a second term and more political dustups.

“I … think [voters] appreciate the fact that he’s willing to step out of the typical comfort zone for politicians and look for solutions working across party lines,” Ben Golnik, a political strategist who helped the Republicans take the Senate in 2010, said in an interview. “I think [Howe] made a name for himself here in his first two years, and I think he’s well positioned to get re-elected.”

Whether he’s pacing around his old City Hall office, meeting with friends and advisers for coffee or giving a tour of his home, Howe’s message of fiscal conservatism shows up in both his personal and public lives. 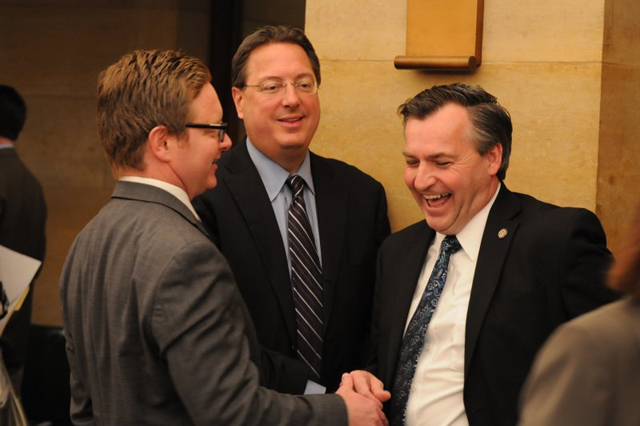 Howe, a property owner who built up a series of Sears franchises before working for Wells Fargo, is loath to take out a loan in his business life. Likewise, at the Capitol, he opposed using statewide tax dollars to fund the Vikings stadium.

Supporters say they value his sincerity.

Steve Stubbe, a retired airline pilot, became an ally when he met Howe early in the 2010 campaign.

“He’s a regular guy, and I know that he’s a sincere guy,” Stubbe said after he and a group of friends met with Howe for coffee recently.

Stubbe’s enthusiasm shows as he describes driving Howe to campaign events and helping him meet voters door to door. He, like others, praises Howe for being willing to fight against the status quo for a common-sense solution, even if that means siding with a Democrat.

In fact, Howe said he’s working with Gov. Mark Dayton and at least one DFL senator to create a nonpartisan working group to address issues like education as they arise next session. Howe sees the group as a way to cut through the gridlock at the Capitol.

“He’s got guts. He has chutzpah … he does. He doesn’t mind getting in your face and asking the hard questions,” Stubbe said. “Polarization was a big deal in door-knocking, and we heard that loud and clear.”

Howe in 2011 proposed to broaden the sales tax base, prompting criticism from Republicans who mistakenly thought he wanted to increase taxes.=

“Certainly there was [backlash] last year” during the 2011 session, he said. “The party actually made phone calls against me in my district.”

Howe, however, believes the broader sales tax would bring in enough new revenue to eventually abolish Minnesota’s income tax. He also believes such a move would cut down on budget highs and lows from biennium to biennium.

But that didn’t deter Howe from taking other controversial positions. This session, he proposed amendments to both the proposed Photo ID constitutional amendment and the $1 billionVikings stadium plan that would have drastically altered the look of each bill.

“When you’re first elected, especially in the Senate, you’re supposed to sit there for a few years and not rock the boat for anybody, but [Howe] jumped right in and he didn’t go through his probationary period,” said Lyle Mehrkens, a former lawmaker from the district who persuaded Howe to run for office. “We really don’t have time for those probationary periods anymore.”

And Senate Republicans told him to be quiet, Howe recalled. One leader in former Majority Leader Amy Koch’s team told him, “Howe, quit fighting the party.”

In traditional form, he said he replied: “I’m not fighting the party. I’m trying to save the party.”

A maverick on several big issues

Howe’s maverick take on the legislative experience was perhaps most apparent in this session’s Photo ID debate.

During a Senate floor session, Howe successfully broadened the language of the Republican-backed constitutional amendment that would require a “government-issued photographic identification” to vote. He added wording that would allow for “equivalent” identification measures, a move that many Democrats supported because it would allow future Legislatures to adapt the law for technological improvements.

“Let the argument win on its merits,” the senator tells pretty much anyone who’ll listen. 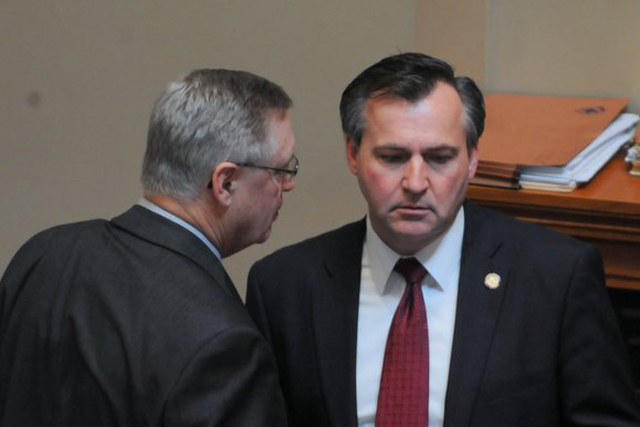 But the wording didn’t survive. Howe was never named to the conference committee that eventually ironed out the differences between the House and Senate bills. So, he wasn’t there when the language was removed, and he remained relatively quiet on the Senate floor when the body re-passed the amendment along near party lines. In the process, he also got labeled as a Photo ID opponent.

“Just because I have another way of getting it done?” he asked out loud, relaying the story months later.

The $1 billion Vikings stadium bill, which passed earlier this month, is another big piece of mammoth legislation Howe attempted to shape.

It passed on a 34-33 vote, but the amendment didn’t last long, either. Howe said the governor’s deputy chief of staff for legislative affairs, Michelle Kelm-Helgen, persuaded four lawmakers to switch their votes and support the original deal, which funds the stadium through expanded charitable gambling.

Howe’s persistence at rewriting the stadium deal also threw off some Vikings fans. Cory Merrifield, who runs SavetheVikes.org, was concerned when Howe repeatedly attempted to amend the bill.

Merrifield said he remembered thinking, “Is he pulling a [Sen.] Sean Nienow and trying to kill this thing?”

“I guess I want to assume the best … but cooler heads prevailed,” Merrifield said, noting that GOP Sen. Julie Rosen, the bill’s chief author, said the fees would be a deal-killer.

Still, Merrifield said he respects someone who is fighting for what he believes is right.

And despite the hours of work and high-profile disappointments, Howe doesn’t appear bitter about his failed attempts to shape the products of his first legislative biennium.

“If you have a thoughtful approach and you do your homework and you’re prepared, you can influence the outcome,” he said. “[Just] maybe not to the extent that you want.”

And despite scuffles in the party and some high-profile legislative overreaches, insiders like Golnik predict a victory for Howe.

Golnik pointed to Howe’s April endorsing convention, where activists unanimously backed him. The Republican strategist said much of the controversy surrounding Howe is too “inside baseball” for the average voter.

“I’m pretty confident I’ll get re-elected,” Howe said. “I think most people here know that I’m really dedicated, and that doesn’t mean I’m not going to work hard at doing it, because if it’s worth doing, you’ve got to put an effort into it.”

“I’m a firm believer: If it doesn’t kill you, it makes you stronger,” he said. “I think I was a voice of reason out there, and I think there’s a lot of support for trying to get things done and work together.”