Lori Wilfahrt can’t imagine what it will be like next November, after Minnesotans have gone to the polls and made a huge decision.

“I think about that,” Wilfahrt said. “I supposed we’ll both be just drained. I wonder, sometimes, if we’ll just be empty. I think sometimes that some of this is a big distraction from our pain.”

That unending pain is from the death of their son Andrew, who was killed in action in Afghanistan Feb. 27, 2011.

The distraction came only a couple of months later, when the Republican-led Minnesota Legislature passed the proposed constitutional amendment that would restrict marriage in Minnesota to a man and a woman.

Their son, a model soldier in every way, was gay.

The linking of his death and the amendment proposal has turned a private Rosemount couple into very public people.

The two have become spokespeople for gay rights throughout the country. They’ve spoken from coast to coast, focusing especially on gays in the military.

“We’ve inherited about 70,000 gay children,” said Lori, warmly. “We can’t begin to tell you how much that means to us. Their hugs and support warm us.’’

Beyond that, Jeff has entered the race for the Minnesota House. He’s running as the DFL-endorsed candidate in District 37B in the Rosemount and Apple Valley area.

He was hoping that his opponent would be incumbent Republican Kurt Bills, who was among the Republicans who voted to pass the amendment and who once had been Andrew’s high-school economics teacher.

But Bills has become the GOP’s U.S. Senate candidate. So, now the GOP candidate will be Anna Wills. On her website, Wills is crystal clear on a number of things:

Noticeably absent in Wills’ list is a direct reference to the so-called marriage amendment.

Lori is helping her husband in his race and working as a volunteer for Minnesotans United for All Families, the umbrella organization working to defeat the amendment.

In her latest fundraising letter for the organization, she wrote:

“If our opponents win, Andrew will have died protecting a constitution that limited his own freedom to marry the person he loved.”

Mostly though, Jeff said, the couple doesn’t talk about the amendment as a marriage amendment. 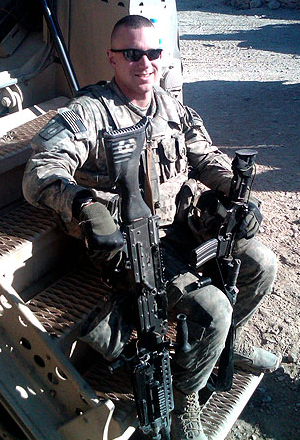 Photo Courtesy of Jeff WilfahrtCpl. Andrew Wilfahrt was killed by a bomb while on
patrol in Afghanistan in 2011.

“It’s about citizenship and access to rights,” he says.

He said the other big point they make in addressing the amendment issue is: “The U.S. military is on our side.”

To date, the Wilfahrts have been subject to only a little criticism for their activism. A blogger, Jeff said, suggested that “I’m coming close to becoming another Cindy Sheehan.”

Sheehan is the anti-war activist whose son, Casey, was killed in Iraq in 2004. She made international headlines in 2005, when she set up a war protest camp outside President George W. Bush’s Texas ranch.

It should be noted that neither Wilfahrt is troubled by the comparison to Sheehan. They despise the ongoing war, which they see as unwinnable and unending. They place the blame for the war on President Bush.

Jeff insists his campaign is about far more than the amendment.

“Education, the economy, equality,” he said of the fundamental themes.

He bristles at GOP talk of “limited government.”

Although he’s running in a district that traditionally supports the GOP, Wilfahrt says he’s been receiving both moral and some financial support from Republicans.

And because of the Wilfahrts’ national prominence on gay rights issues, this little legislative race already has drawn a national audience among gay rights activists.

The couple has spoken at churches throughout the state. 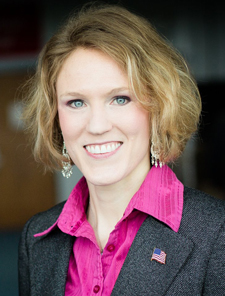 That’s a reminder that although the Christian right and the Catholic Church are major supporters of the amendment, it’s an issue that divides Christians.

The White House sent them one of the pens used in signing an end to the military’s discrimination against gays in the military.

Their speaking schedule is full “from now to October.”

All of this is so different from how they anticipated their lives would be.

“We were like most people,” said Lori, who works as e-marketing manager for a line of 3M dental products. Her husband, a former 3M employee, is now self-employed and for many years specialized in writing high-end engineering software.

“We read about events,” she said. “But we sat at home and griped and complained about things the government was doing.”

They still can complain.

One of Jeff’s huge complaints is aimed at the national media, which he believes “have failed the country by sanitizing the war.”

But mostly they work to change hearts and minds. (Lori’s style is a little more low-key than her husband’s.)  Their work is highly public and unending — at least until November.

What would Andrew have thought of the roads his parents have taken?

“He’d laugh,” said his mother. “But I think he’d be glad that we were making a difference.”