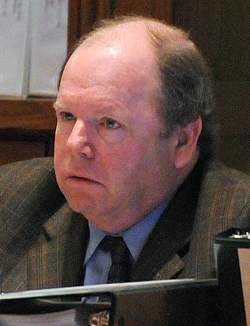 Some Minnesota counties — which help administer elections — are making preliminary plans for implementing the proposed Photo ID constitutional amendment that will live or die at voters’ hands in November.

Joe Mansky, elections manager in Ramsey County, discussed the amendment’s potential effects with his county board Tuesday in an informational meeting.

Mansky estimated the cost of the amendment, which would require voters to show an ID at the polls, would be about $1.7 million for his office over the first two years.

“The bottom line is, we operate entirely on property taxes,” Mansky said. “Any increase to our budget has to come from the property taxpayers.”

New computers would make up roughly $1.25 million of the foreseeable total cost, which would also be buoyed by a $250,000 informational campaign and $200,000 in city election operations expenses.

Mansky said the new computers could be used as electronic poll books if next year’s Legislature, which will have to craft the amendment-in-waiting’s specific language, decides to go that route. They would also be used to verify registered voters.

The large number of provisional ballots — which would allow a voter to come back later with proper ID — could slow down the entire election system, Mansky said.

Anoka County Elections Manager Cindy Reichert estimated that electronic poll books would cost her office about $700,000, although she stressed it was a preliminary figure.

Her county sees about 33,000 Election Day registrants and about 180,000 total voters in a presidential election.

The Anoka County Board hasn’t formally met about Photo ID and doesn’t have a set position on the issue, she said. But Reichert has been addressing the issue informally in her office during budget meetings and other planning functions as a “heads up that it might be coming.”

Mansky — who, as a representative of county auditors, brought their concerns to the Legislature — said there’s no question his office could implement the proposal, despite some challenges going forward.

“Officially, I don’t oppose it,” he said. “We’re prepared. If the voters agree with this and vote for it, we will implement it.”

Mansky discussed potential solutions to concerns raised by board members and also offered one novel approach: printing the free IDs specified in the amendment at polling places.

“I have no idea whether it would have any support in the real world,” he said. “I’m not quite sure how it would work at this point.”

But, according to a spokeswoman from the Department of Public Safety, which provides services related to IDs and driver’s licenses, it’s unlikely that such a solution would be workable.

ID cards and driver’s licenses are printed off-site and are “impossible to print on the spot” because of specific security features,” said Kristine Chapin, a public information officer.

“It would be impossible with the system we currently have,” she said.