SHANGHAI — The Suzhou Industrial Park railway station is located one 30-minute high-speed train ride west of Shanghai. The Park itself is a massive space  –  reportedly, 100 square kilometers  –  that takes more than half-an-hour to cross by taxi – without traffic. The drive, however, is pleasant insofar as industrial parks go: the boulevards are tree-lined, wide, and filled out with green spaces, lakes and some of the world’s biggest and best-known manufacturers. I notice signs for Samsung, Seagate and International Paper during the first five minutes of my most recent taxi ride; Mercure, Bosch, and YKK during the next five.

But I’m not here to see those global champions, as the Chinese call them. Rather, I’m here to see Minnesota Rubber & Plastics, a 72-year-old, Minneapolis-based manufacturer of rubber and plastic parts for industries as diverse as plumbing and beer kegs. Since 2008, they’ve manufactured out of a three-story, 30,000 square foot factory here.

It is not, however, an off-shoring operation intended to circumvent high U.S. labor and regulatory costs. Rather, most of what they make is manufactured for customers in the booming Chinese market.

“Minnesota Rubber’s China plant isn’t just about low costs,” says Howe Yun, a native of China’s Shanxi Province, and the plant’s general manager. “It’s about having a lot of customers over here.”

And why wouldn’t it be?

It’s preposterous to think that a U.S.-manufacturer that supplies to the auto industry – such as Minnesota Rubber – wouldn’t attempt to sell to the automobile manufacturers – foreign and Chinese – now located in China. Indeed, according Craig Swanberg, they’ve not only sold into it, they’ve thrived in it. 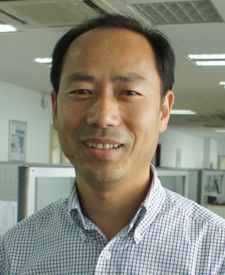 In 2008, the Minnesota Rubber’s first year selling into China, the company generated $2 million in revenues; last year, they generated $10 million.

“It’s the fastest growing segment of our company,” Swanberg skyped from Minneapolis. “In fact I don’t think we’ve ever had a segment grow like that.”

That’s illustrious company: Minnesota Rubber currently manufactures in Mexico and North America, and has previously manufactured in Singapore and France. But Minnesota Rubber isn’t alone in pursuing a focus on China’s market. Exporters across Minnesota – farmers to machine shop owners – are starting to adopt the same strategy, providing the state with an engine of growth in an economic environment that remains – charitably – murky for Minnesota businesses.

On Saturday evening Gov. Mark Dayton will arrive in Beijing with a delegation of 50 state leaders, farmers, trade association representatives and business people for a nine-day trade mission. It’s the fourth major trade mission to China led by a Minnesota governor in a decade, and it will build on those previous missions with the express goal of opening markets and expanding opportunities for Minnesota businesses to sell into China’s vast and ever-expanding marketplace. For Minnesota businesses with products to sell, this is a matter of survival: Minnesota’s economy grew just 1.2 percent in 2011. But there’s hope: China’s economy hummed along at 9.2 percent.

No surprise, China (including semi-autonomous Hong Kong) is Minnesota’s second largest export market, with $2.3 billion worth of goods shipped in 2011, up 18 percent over 2010. Remarkably, that’s roughly equal to the value of the trade that Minnesota did with top trading partner Canada in 2001 (a year in which China was the state’s fourth biggest trading partner, with $619 million shipped).

For farmers, it’s an even bigger story. In 2011, agriculture represented almost 60 percent of the value exported to China, up 89 percent over the previous year, and almost 800 percent over the last decade. Kevin Paap, president of the Minnesota Farm Bureau Federation, told me by phone from Eagan that the U.S. exports 72 percent of its soybeans to China, and Minnesota “exports even higher than that.” He added that, before leaving Minnesota for China, he’d be taking photos of his fields to show to any potential Chinese buyers he encountered during the mission.

Charlie Poster, an assistant commissioner at the Minnesota Department of Agriculture who will participate in the trade mission, was just as bullish on Minnesota soy bean exports – if not more.

“If four soybeans are exported out of Minnesota, one of them is going to China,” he explained by phone. Most of those soybeans – “upwards of 80 percent” – are made into feed that eventually supports the production of meat and dairy products. “As countries get wealthier, and as people move out of subsistence poverty, they don’t buy iPods or a big plasma screen, they start to eat better, and it’s almost always in the form of meat and dairy …”

One result of this new demand for protein in China, and other developing countries, is a global run on soybeans that has enriched farmers – and farm communities – through Minnesota.

“In the ‘80s there were terrible commodity prices and my family got out of farming,” Poster recalls. “Now you can raise a family on farming. That means the car dealership in town has business.”

Paul Swenson, the Minnesota Trade Representative in China since 2005, occupies a 10th-floor office on a busy, smog-choked boulevard in the Pudong section of Shanghai. He’s a native of Hudson, Wis., a graduate of St. Olaf, and a fluent Chinese speaker with more than two decades experience in China. He’s also a soft-spoken and exceedingly modest gentleman whose modesty obscures a deep and abiding knowledge of how to do business in China – especially if you’re a Minnesotan. 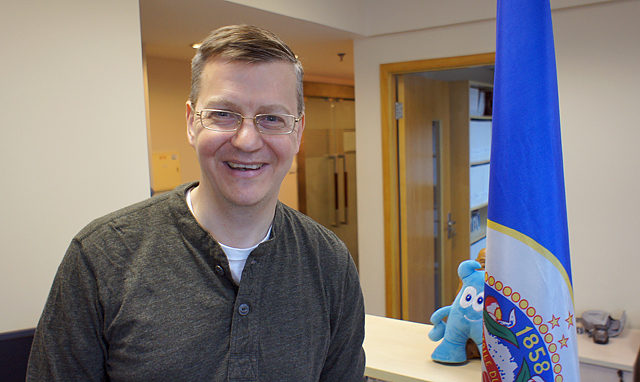 MinnPost photo by Adam MinterPaul Swenson has been the Minnesota Trade Representative in China since 2005.

For example: just inside his office doorway is a photo of Jesse Ventura and a note thanking Paul for his assistance during Ventura’s 2002 trade mission to Shanghai. At the time, Swenson worked for the Shanghai branch of the U.S. Commercial Service, the trade promotion arm of the U.S. Department of Commerce’s International Trade Administration.

Swenson’s current job is multi-faceted, but perhaps his most important function is helping small and medium-sized Minnesota businesses gain access to a country in which they lack linguistic, cultural and business proficiency.

“We help them to find agents and distributors,” he explains in a small conference room in view of the Ventura photos. “We help them to do simple market research. We do a lot of due diligence.”

The last task is particularly important due to the large number of cold internet inquiries that Minnesota companies receive from China. “About 30 percent of them turn out to be scams,” Swenson concedes.

But how, then, does a Minnesota company with a great product to sell into China go about doing it successfully? 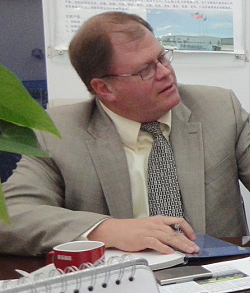 Dave Anderson, international marketing director for Jet Edge, a St. Michael-based manufacturer of highly specialized water pumps, was asking himself that question in 2010. At the time, roughly 25 percent to 30 percent of the company’s $25 million in annual sales were generated internationally – but almost nothing came out of the world’s second largest economy.

So Anderson rented some space for his company in a business incubator out by the port and joined Gov. Tim Pawlenty’s final trade mission in September. “The doors that can be open to you because you’re with that high-profile delegation are very important,” he tells me in a phone conversation from Korea, where he’s delivering a Minnesota-built machine to a customer. “You get to meet with people you wouldn’t otherwise meet.”

No surprise, this weekend he’s flying from Korea to Beijing to join Dayton’s mission.

Non-disclosure agreements prevent the Minnesota Trade Office from revealing too much – including names – of the success stories that they’ve shepherded into Chinese profitability over the years. But Jet Edge is, unquestionably, just one among many. And that success is reflected in the trade figures. In 2011, Minnesota exported $585 million worth of machinery to China, a $71 million gain over 2010. What nobody knows, or is in a position to estimate, is just how much revenue the Minnesota-owned factories in China are sending to their parent companies back home.

“There’s no denying that we did shed a lot of manufacturing jobs in the U.S. in general,” Swenson concedes, as he looks back on the 1990s and 2000s. “But a lot of companies — the ways they’re set up now – are going to be re-shoring. Because it’s just more cost-effective to manufacture in the U.S. for the U.S.”

Chinese labor prices have been rising steadily for most of the last decade, but they began to accelerate in 2007 and 2008, becoming both cause and effect of inflation, and rendering many export-oriented manufacturing operations borderline non-competitive. But all was not lost for the nimble, China-based manufacturer: higher Chinese pay packets drove the emergence of the Chinese middle-class consumer, and companies hoping to cater to them.

“So now firms are coming over and setting up plants to serve their Chinese clients,” explains Swenson. “And the bulk of those products they’re making are staying in China.”

In many ways, Minnesota Rubber & Plastics epitomizes the shift that Swenson describes. In the mid-2000s, the company began to look seriously at setting up manufacturing operations in China. In part, they really didn’t feel that they had a choice: several of the company’s key customers had off-shored their production to China. As a key supplier of parts to those manufacturers of finished goods, Minnesota Rubber was in a tough spot.

“They told us they wanted us to manufacture here [China] or the business may go elsewhere, to someone else,” explains Craig Swanberg. “We were not thinking, ‘Let’s have a market in Asia and take advantage of Asia.’ We were thinking we need to service our current customer base.”

Howe Yun, the first and still only GM for Minnesota Rubber’s Suzhou factory, encouraged the company to think more broadly about what was happening in China – and they did. Today the company has sales offices up and down China’s booming East Coast, and some newly leased empty space in its Suzhou factory that Yun expects the salesmen to fill with new orders, soon.

On Thursday afternoon Yun walked me through the immaculate factory, pointing out various kinds of injection molding machines and the products coming out of them. Mostly, I saw O-rings, but at one end of the factory, we came across a young man making shower heads. Next to him, a new machine, festooned with a giant robotic arm, was being prepared to automate the entire process. In the short term, the change will improve efficiency; in the long-term, it’ll save on rising labor costs. But even now, it’s clear that Minnesotans manufacturing in China are no longer looking at old, cheap labor models to succeed.

Craig Swanberg, in Minneapolis, tells me that – despite the negative stereotypes associated with manufacturing in China – the decision to open a Minnesota Rubber facility in Suzhou has actually aided his company’s growth in Minnesota.

“China hasn’t cost us any jobs in North America,” he tells me. “In fact, it has added jobs. We’ve been able to grow because of the China business, not in spite of it.”

It’s a model Dayton and his delegation hope to follow as they trek across China over the next nine days, in search of opportunities and markets.

Adam Minter is the Shanghai correspondent for Bloomberg World View.