In politics, the bar is always higher for the challenger. Republican-endorsed U.S. Senate candidate Kurt Bills not only must struggle to match Sen. Amy Klobuchar in name recognition, popularity and fund-raising. In a very short time, Bills will be expected to be as knowledgeable about domestic and foreign policy as a six-year incumbent.

So what is Bills’ thinking on some of the big policy issues and controversies facing this country? Earlier this week, I talked to him about a wide range of topics – from Thursday’s U.S. Supreme Court ruling on the health care law, to the Ryan budget proposal to the U.S. role in Afghanistan.

Here are edited excerpts of my interview:

MINNPOST: What is your reaction to the U.S. Supreme Court decision on the health-care reform law and how will you address this issue during the campaign?

BILLS: The disappointing part, and even my students point out, is that we are adding entitlements before we are reforming the entitlements that we have already. I think that just seven years of state-based market approach systems, and we’ve seen reforms in the state of Minnesota, that would be more of the answer than what we have.

Now that said, the Supreme Court has upheld it and now we’re going to see the taxes come down. This thing is filled — I counted 20 as I read through the article today — you know, 20 different taxes that are included in this. And I think it’s going to come to a $500 billon total tax increase.

MINNPOST: Some Republicans have said they would keep parts of this bill.  Would you?

MINNPOST: You support the budget put forth by Congressman Paul Ryan of Wisconsin that proposes big changes in Medicare, Medicaid and Social Security. Specifically, what changes would you like to see enacted?

BILLS: The first statement that has to be made here is that if you do nothing these systems go away, these entitlements go away completely and those dates are moving closer to us and closer to us. Doing nothing takes these programs away.

What Congressman Ryan proposes for Medicare is keeping it there for people who are 55 plus, which is wonderful. I think seniors can get behind that. I think seniors want these programs to be around for their grand kids, so I think they can buy into it and be a part of the solution.

Also, when you look at Medicare and how he wants to fully fund the MSA [medical savings accounts] accounts, I think that’s a good solution. It allows low-income to utilize the system and still seeing how the cost drivers work. From a supply-and-demand angle and believing in prices, allocating goods efficiently, people need to see how much things cost. And if they do — and we found in the state of Minnesota as well — when people see how much things cost, then they adjust their consumption and the program becomes viable.

MINNPOST: Will seniors see comparable benefits as they have today?

BILLS: Yes they will because they risk-adjust it [medical savings accounts]. If you have more health conditions with that $11,000, I believe that Congressman Ryan has proposed to put into those accounts. Or you use risk adjusted, inflation adjusted and income adjusted, which I think is interesting.

And you could transfer that over to some of the reforms that I’ve looked at with Social Security. But when we do that, and when we income adjust things or means test them, now we have to start looking at them as an actual tax not so much an entitlement program that you’re paying into because your benefits are going to be, will be adjusted by what you’ve brought in as income. It will make the tax incidence more progressive.

In my mind something has to work. I think even though there are Republicans, the “no new revenue no new taxes,” well, you know, we have to look at situations like this. Maybe it would be a great compromise to look at the tax code and then reform it so that the people who are paying those higher taxes are now paying a lower marginal rate. I like a flat tax so that’s my preference.

What a great compromise. Yes, entitlements will be means tested but those people who do have small businesses like my wife and I, doing your taxes is now much easier.

MINNPOST: Under the Ryan plan, payments to providers will be reduced if Medicare runs a shortfall. Do you agree with that?

BILLS: From an economic standpoint, you don’t want to have cost shifting take place.  I’m willing to go in and discuss these things from what the government can do, but boy, if you walk away from the market, you get taught a lesson.

MINNPOST: What about Medicaid?

BILLS: I like the block grants to the states. This is one thing that I think is very simple. I believe in states…. 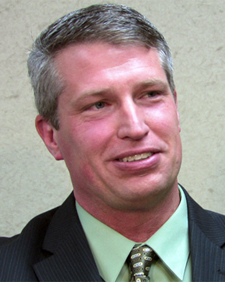 BILLS: It’s moving up rapidly toward insolvency, so how do you keep this program around?

You have to be able, go in again, secure it for the people who are there. We do have to look at that retirement age and adjusting that by a small increments starting in, I think the platform [in the Rand Paul budget proposal] starts in 2014, just three-month increments. We shouldn’t have people relying on Social Security as their only stream of income, but we need to make sure it’s there for the people who are paying into it. Adjusting for retirement and also means testing, as I mentioned before, is a big part of that.

MINNPOST: How would you change the Federal Reserve?

BILLS: The reason why people are screaming to end the fed is because, I think, they want to end the fed’s policy first of all. I think that working-class people are starting to see that what the fed does and its inflationary measures is really catastrophic to them and their ability to save and some day retire.

So how can we get into the system and change it? First of all, you audit it so that Americans know where the money is going. Remember, this is a private bank that’s given a monopoly over our currency. Manipulating the interest rates only causes the business cycle. It only causes the boom that then is the bust and then the government tries to fix the bust too.The government is actually involved currently  in creating the boom and then trying to solve the bust, both of which are adding government to the economy, which I think is the opposite direction I think we have to go.

MINNPOST: But can a member of Congress really affect what the fed does and how decisions are made?

BILLS: There’s a couple of things, auditing as I mentioned.  But also the FMOC, the Federal Open Market Committee, which drives the purchasing, the buying and selling of bonds for the Fed, well, that’s a creature of Washington D.C. Part of my pushback is why not offer all 12 regional banks a vote on the FMOC instead of just the five. They can push back if they need to or if they want to against this seven-member board of governors who are posted for 14 years.

MINNPOST: Is there something government can do to boost employment aside from business tax policy?

You’ve got to shrink the size of the federal workforce. They’re not building manufacturing centers in Washington. D.C.

MINNPOST: Should government encourage investment or training in certain growth areas, like technology?

BILLS: Let markets drive it, don’t try to pick and choose the winners and losers.  HSBC, a large bank, has said that the low carbon, conservation, environmental approach, those industries, is a $2 trillion industry in the next 10 years because young people are really getting into conservation. If you can’t go as a private company and take part in a $2 trillion sector of the economy, if you can’t find a way forward, you shouldn’t be a company.

From my perspective the government needs to have less of a footprint and let the market drive these things. Again, by trying to manipulate interests rates, creating 2,000 subsidies since 1980, all we’re doing is creating the boom and then when the boom busts we’re trying to fix he bust so we get more and more  government.

MINNPOST: What should be America’s role in solving the Euro-zone economic crisis?

BILLS: Number one thing as Americans, we have to learn from it. We can’t get out of debt with more debt and that’s what we have to be cautious of with our involvement with the International Monetary Fund. Are we going to be bailing out those European banks as we bailed out our banks? Because I personally, as an American, as a Minnesotan, I don’t want to be involved in that. Europe has its problems, Europe has spent too much. You tied the currency together but you didn’t tie the financing together.

MINNPOST: You support cutting our foreign aid from $50 billion a year to $5 billion. Are there risks that come with this kind of reduction?

BILLS: I see the best way of helping these countries is by trading with them. If we trade with each other, that’s also a great national security, to promote our national security we trade with other countries, and then we’re integrated with them and then we’re less likely to be aggressive toward them and they’re less likely to be aggressive towards us. So that’s the way I see that we can help these countries.

MINNPOST: What about Afghanistan?

BILLS: There’s leeriness, there’s a wariness of being there. What’s the goal, what’s the plan? We got Osama Bin Laden. At this point I would question the value of staying there without an end in sight. Many nations have tried that – from Alexander the Great to the Russians to the British. That’s an area of the world that‘s very difficult. Again, how can we promote trade with them? How can we lift their country up?

MINNPOST: How would you provide the leadership to avoid the gridlock that Americans are very tired with? What forms of compromise would you support?

BILLS: I would be going to the U.S. Senate as a public school teacher and the parent of four kids, and that’s who we have to go and do this for. No longer can we have the pulling in every industry. You know, Dwight Eisenhower talked about the military industrial complex, well currently I see it as the agriculture industrial complex, a health care industrial complex, you go right down the line and all of these things have been brought into Washington D.C. And I’m sorry but it’s so that career politicians can raise money from those lobbyists. And that is wrong because we’re not keeping our kids in mind, we’re not keeping our posterity in mind.

That means going in and sitting down next to the people who you ideologically are opposed to. It’s amazing that when you get to talk, and sure there are the talking points and I understand the political virtue of things, but when we get to the economic virtue and we have to do something, that’s when people start to actually put their priorities on the table and start to talk about where they could agree and that’s what you have to do in terms of spending, in terms of entitlements.

MINNPOST: Does that mean even increasing some taxes to lower others?

BILLS: Thoughtfulness. To have a 17.1 percent flat tax, you’re raising the 10 percent rate. And some groups look at that and say, “Oh, he’s raising taxes.” No I’m simplifying the system because in a dynamic scoring method, this actually comes out better. If that makes a certain interest group mad, so be it.