SHANGHAI — Day six of Gov. Mark Dayton’s nine-day trade mission to China opens in the Violet Room of Shanghai’s Hongta Hotel. He arrives with a handful of staff members and is soon met by Dennis Nguyen, co-chairman of Minneapolis-based New Asia Partners, a private equity firm, and Zou Guangyou, China’s officially designated Sweet Potato King. New Asia Partners has made a substantial investment in Zou’s China-based business, and it’s Nguyen’s hope that Zou will, in part, reciprocate by considering a Minnesota-based international headquarters in the state.

Dayton and his staff are receptive. Over the last decade China has become Minnesota’s second largest export market (after Canada), and an important source of job growth in the state. For Dayton, an occasional critic and opponent of free trade agreements during his U.S. Senate tenure, this is overdue.

“I think I’m promoting the rebalancing of the economic relationship between the two countries,” he tells me an interview after the meeting. “Prior to the last decade, when I was in the Senate, the imbalance of trade was staggeringly in China’s favor, they were making products that used to be made in the United States, with much less expensive labor, and their markets were mostly closed to Minnesota companies, Minnesota farmers.”

That’s no longer the case. Minnesota exported more than $1.3 billion worth of food alone to China in 2011, and Minnesota industries exported almost $1 billion more in goods and services. That’s great, but the next goal, for Dayton and Minnesota businessmen like Nguyen, is to turn around the flow of investment. Or, as Dayton put it in a speech to the American Chamber of Commerce in Shanghai on Wednesday: “Last report I saw the Chinese government owns 1 trillion of US government debt … obviously it’s to our benefit if they use it as investment capital in places like Minnesota.”

Dennis Nguyen is in line to help.

Nguyen is a Southern California native who fell in love with Minnesota during his years at the University of Minnesota Law School (he’s now an adjunct professor there). His early career led him back to Asia, and during the 2000s he formed New Asia Partners, which he ran from Shanghai.

In 2008, however, the global financial crisis devastated the world of private equity, and Nguyen was forced to all-but shut down his firm. “For the next three years I just hibernated in Minneapolis,” he tells the governor at the beginning of the Violet Room meeting.

This so-called “reverse investment” has some very expensive, very recent precedents. In late 2003, for example, China’s state-owned Laiwu Steel partnered with US-owned Cleveland Cliffs and re-opened the shuttered Evtac iron ore mine in Eveleth, Minn. More recently, state-owned China Aviation Industry General Aircraft Corporation spent over $200 million to acquire Duluth-based Cirrus Aircraft, a maker of small airplanes. Both acquisitions, at opposite ends of the decade, not only saved businesses, but they saved hundreds of northern Minnesota jobs.

From Dayton’s perspective, these deals aren’t just economic successes. Rather, they’ve started what will be a long, and sometimes difficult, path to convincing Minnesotans that there are actual benefits to trade with China. It’s not an easy argument to make to middle-class constituents suffering from 1.2 growth in 2011, while the Chinese have enjoyed annual growth around 10 percent for the last decade. It’s especially difficult if you’re a DFL governor who enjoyed strong support from union members.

“Nothing persuaded the steelworkers more effectively than when Laiwu Steel bought half of [EVTAC] which was basically about to close its doors,” he told me during our interview.“They saved the company, saved several hundred jobs there, so I didn’t need to say anything; the steelworkers themselves were directly affected and their families knew it.”

For now, at least, EVTAC and Cirrus are the biggest deals, but they are by no means the only ones. Alas, precise – or even imprecise – statistics on Chinese investment in Minnesota doesn’t exist. But anecdotally, at least, it’s a growing phenomenon.

“You hear bits and pieces of what’s going on,” says Paul Swenson, Minnesota’s outgoing trade representative in Shanghai. “Somebody is setting up a warehouse or office. It’s out there.”

During the Violet Room meeting with Dayton, Dennis Nguyen explains that he’s focused on China’s middle class as an investment opportunity. This isn’t a novel approach, by any means: by some estimates, China will have the world’s second largest consumer products market by 2015. But already it’s increasingly affluent middle-class is having a real impact on Minnesota.

And that brings Zou to the Sweet Potato King, himself, Zou Guangyou.

Zou asks for the lights to be dimmed and turns on a slide projector.

Like entrepreneurs everywhere, Zou likes to tell – and market — his rags-to-riches story. In his case, he claims to have started in 1992 with little more than 500 yuan (around $75 in 1992), a bicycle and a bunch of sweet potatoes. In time, he went from selling sweet potatoes to developing technologies and products that transform sweet potatoes into a best-selling organic sweet potato vermicelli ramen (the “sour and spicy” flavor is deservedly popular, in my opinion). 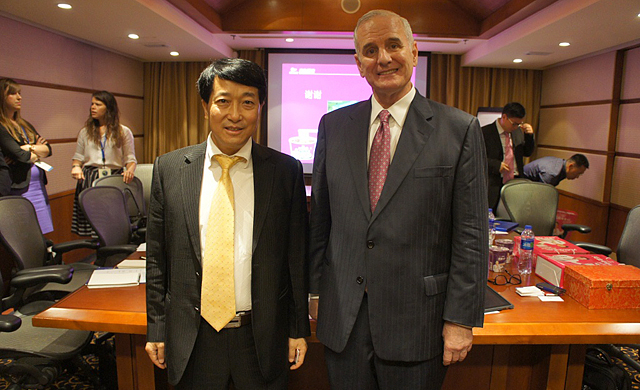 Today he has much more: Sichuan Guangyou Sweet Potato and Food Products Co Ltd has 823 employees and a nationally known brand that can be found (in my experience) in any Chinese grocery store.

In China, however, it’s not the brand name that people know; it’s the Sweet Potato King’s smiling face and enthusiastic thumbs-up that appears on every package of the much favored product. It’s not quite as well-known as Betty Crocker or Colonel Sanders might be in the United States to be sure, but it’s a fair if somewhat faint approximation. Graciously, in the midst of his presentation, Zou personally hands a package of his “Dark-Chicken & Fungus Flavor” noodles to everyone in the room (delicious – I had them for lunch).

As Zou flips through the slides, a young man with a video camera slowly moves through the room, recording the meeting and the presentation, doting for long moments on the governor and his entourage. From the governor’s perspective, this is exceedingly welcome: the meeting with Zou is designed to impress upon the Sweet Potato King and his investors that they’re welcome in Minnesota. However, the meeting is far from unusual: much of Dayton’s time on the mission is devoted to helping Minnesota businesses open and close deals with potential and actual partners (he was scheduled to have two more similar meetings after the one with Nguyen and Zou).

“The governor serves as kind of a business accelerator in those circumstances,” explains Paul Swenson. “He speeds up deals because people want to time deals to his visits.”

This certainly appears to be the case in the meeting with Dennis Nguyen and Zou Guangyou. Mid-meeting, Zou announces: “Meeting Governor Dayton makes me more confident in Minnesota.”

As Dayton listens, Zou opens another box and explains to the governor and his staff the organic ingredients that make up his sweet potato vermicelli ramen, and the care taken in preparing each item – noodles to flavor pack. “The noodles are made from a purple sweet potato,” he reveals.

The governor nods. “Are the soil and climate conditions in Minnesota different than in China for the growing of sweet potatoes?” he asks.

Zou confirms that the soil conditions are, in fact, slightly different. But it shouldn’t be a major issue. In any event, Zou knows what he intends to get out of this meeting. “We understand that Minnesota is a food processing center,” he tells Dayton. “And we hope to open a plant in Minnesota after the IPO.”

“I look forward to a future when this product is made in Minnesota,” Dayton says.

“We would like to move our international headquarters to Minnesota,” Zou notes.

“Well,” Dayton responds. “If you do that my staff will eat three of these [containers] every day.”

Zou is prepared to help that process along. He and his staff have brought gift bags filled with noodle boxes, and covered in his smiling, thumbs-up face, for everyone. No promises were made, but positive impressions certainly were. Follow-up will come from the Minnesota Trade Office and new Asia partners over the coming months.

Over the course of his two-and-a-half days in Shanghai, I’ve heard Dayton repeat a handful of anecdotes during his ceremonial and informal appearances. But the one that I’ve heard most goes like this (as told to a Chinese reporter on Tuesday night): “It’s sometimes hard to get the recognition of the value of these trips,” he said. “And I remember one Chinese official when I visited some time ago, he told me: ‘First [a] stranger, second time [an] acquaintance, third time [a] friend. Chinese officials really appreciate the continuity of relationships.’”

It’s an anecdote that few businesspeople in China would find objectionable. Trust in business relationships takes time, especially between such disparate – and distant – cultures.

One way to build that trust is to hold meetings like the one in the Violet Room. Another is to open a China-based trade office, as Minnesota did in 2005,  that provides continuity and a contact for Minnesota and China-based business on the ground in China. On Tuesday, Dayton opened a new version of that Minnesota trade office, combining it with an outreach office that had been formed by Greater MSP, a private-public partnership chartered to further the interests of the Twin Cities in general. According to Michael Langley, the CEO of Greater MSP, the organization has set the goal of 100,000 new jobs in the Twin Cities by 2016. If Greater MSP hopes to come close to that goal, it’s going to need to find investors from developing Asia, and cash-rich China, in particular.

Meanwhile, next week, after Dayton and his staff return to Minnesota, they’ll start the busy and relentless process of following-up with the Sweet Potato King, and other Chinese businesses thinking about Minnesota as an investment, rather than just as a place where they can send low-priced exports.

Adam Minter is the Shanghai correspondent for Bloomberg World View.

Wheeling and dealing with Dayton in China