Have you been following the contretemps involving Chick-fil-A and same-sex marriage? It’s one of those sagas that tickles a newsie’s reportorial fancy, containing more improbable twists than anything one might make up were one in the business of writing, say, sitcoms or old-fashioned farces.

It’s also a cautionary tale for businesses that dabble both in politics and social media, but let’s dispense with the stranger-than-fiction first.

Chick-fil-A, for the uninitiated among us, is a fast-food chain that is wildly popular in other parts of the country for its chicken sandwich, which you can order with waffle fries and, for a limited time, a hand-spun peach shake.

There are two outposts here, one in Dinkytown in Minneapolis and the other at the Minneapolis-St. Paul International Airport’s Terminal 1-Lindbergh, near Gate C13.

Till now, a very quiet boycott

Gay and lesbian rights groups have long boycotted Chick-fil-A over its donations to anti-gay causes, including groups campaigning against same-sex marriage and an organization that purports to “cure” gays. Until recently, however, it was a very quiet boycott.

Few knew that founder Truett Cathy had firm opinions about the personal lives of the owners of Chick-fil-A’s 1,600 franchises and their employees. He preferred them married, and expected adherence to the company’s stated mission to “glorify God.”

“Family members of prospective operators — children, even — are frequently interviewed so Cathy and his family can learn more about job candidates and their relationships at home,” Forbes reported in 2007, when Cathy was 86.

” ‘If a man can’t manage his own life, he can’t manage a business,’ says Cathy, who says he would probably fire an employee or terminate an operator who ‘has been sinful or done something harmful to their family members.’ “

The company is now run by Dan Cathy, who sparked a ruckus by telling the Baptist Press that the company is committed to traditional marriage. 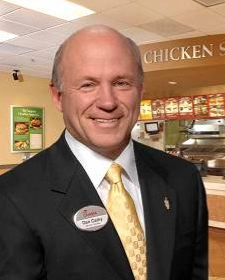 ” ‘Guilty as charged,’ said Cathy when asked about the company’s position,” the publication reported last week. “We are very much supportive of the family — the biblical definition of the family unit. We are a family-owned business, a family-led business, and we are married to our first wives. We give God thanks for that.”

On Friday, the Jim Henson Company announced that, in response, it was ending its relationship with Chick-fil-A, which had been distributing miniature muppets in its children’s meals. Chick-fil-A responded in turn by announcing that the day before, July 19, it had recalled the puppets because of “reports of children getting their fingers stuck in the holes of the puppets.”

Protesters planned a “National Same-Sex Kiss Day at Chick-fil-A” for Aug. 3 and Mike Huckabee called for a “Chick-fil-A Day” Aug. 1. (Will Minnesotans on either side of the issue make it past the Transportation Security Administration checkpoints to attend either the kissing protest or the chicken-gobbling one? Send us an Instagram if you do and we’ll report it.)

Elected officials in Boston and Chicago vowed to make it much, much harder for the chain to open new franchises within their borders. At the Twitter hashtag #ChickFilGay, folks purporting to have the secret sandwich recipe offered solace to gay-rights supporters undergoing withdrawal.

On July 19, the company posted a statement on its Facebook page that was doubtless intended to quell the uproar. “Going forward, our intent is to leave the policy debate over same-sex marriage to the government and political arena,” it read in part. “From the day Truett Cathy started the company, he began applying biblically-based principles to managing his business.”

To date, the statement has garnered 84,000 “likes” and nearly 30,000 comments ranging from the profane to insistent that “The Original,” the sandwich that started it all, is unpalatable. A Monday post asking visitors to take a “peachy poll” about its latest milkshake flavor and a Tuesday “best cow costume contest” update pushed the comment thread a little lower on the page but failed to put out the conflagration.

“The company,” Forbes reported, “flunked crisis PR 101 and spawned a social-media firestorm with its inept handling of the issue.”

The debut of Abby Farle

Wednesday, a supposed screenshot of the comment thread — no, Your Humble Blogger did not read all 30,000 comments — made the Internet rounds. The posters accused Chick-fil-A of creating a fictional (and marginally literate) teen, Abby Farle, equipping her with a headshot downloaded from a stock photo agency and having her spring to the chain’s defense. 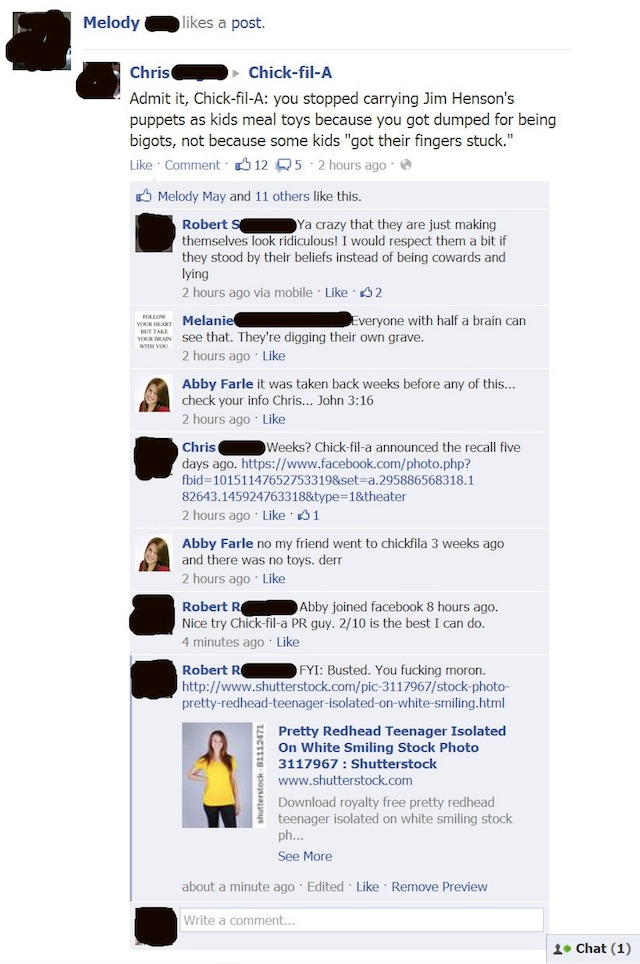 Twitter only poured kerosene on things. “I need a shirt that says: I hated Chik-fil-a [sic] for their Judeo-Christian nonsense before it was cool,” tweeted Indy McDaniel, aka ‏@steelcorpfilms.

So what are Minnesota businesses, many of which have voiced their opposition to a proposed constitutional amendment banning same-sex marriage, to make of this?

First, we can hope they have learned the same lesson grownups have been trying to drill into the hormonally sodden craniums of teens everywhere: Once you’ve put it on Facebook, you don’t control it. And if you lose control in a bad way, your best bet is to try to steer the conversation back to peach shakes and grand openings.

‘You must respond quickly’

“The speed at which this happened couldn’t have taken place anywhere else but Facebook or perhaps Twitter,” said Chris Duffy, an online strategist with the public-affairs communications concern Goff Public. “If it breaks out on social media you must respond quickly. No longer do you have 12 hours to think about it before the headlines appear in the newspaper in the morning.”

“Try to bring the focus back to your main product,” Duffy said, adding that most likely he’d counseling leaving the page up. “I think a business has to stand behind its Facebook page. Either take it down permanently or try to steer the conversation away from your political beliefs and it’ll probably go away pretty quickly given the pace of the news cycle.”

Better, in his opinion, to think carefully before you post. “Many people choose their brands based on emotions, and for many what happened here is probably enough,” Duffy said. “If you’re in an industry that serves customers directly, such as hospitality or restaurants, when you’re a leader in that industry and you make public your views about, say, the rights of gays and lesbians, you’d better be prepared.”

Stakes are different for ‘branded house’

Akshay Rao is a professor of marketing at the University of Minnesota’s Carlson School and a Facebook avoider. As such, he’s in no position to comment on the management of one’s social-media profile, he said, but he does have a couple of opinions.

First and foremost, the Chick-fil-A story throws into stark relief the experiences of the large Minnesota companies that have carefully articulated their support for same-sex marriage rights in recent months. “I think Marilyn Carlson Nelson has done extremely well, I think General Mills has done extremely well, as well as St. Jude and Target,” which recently added GLBT greeting cards to its inventory.

Second, when a consumer boycott is a possibility, the stakes are very different for any of those “houses of brands” than a “branded house” like Chick-fil-A than. “General Mills has Cheerios and Yoplait and Betty Crocker,” he said. “If someone is going to boycott them, they are going to have to create a shopping list of brands.”