“If @TimPawleny is selected as VP it will only show that @MittRomney has entirely written off the base,” Minnesota Republican consultant Andy Parrish wrote Monday on Twitter.

“Dear @mittromney if you have picked @timpawlenty as your running mate, I beg of you, if you want to win, reconsider. Not a real conservative,” tweeted conservative blogger Andy Aplikowski.

Monday’s New York Times article, which quoted Norquist and cast Pawlenty’s vice presidential promise in a rosy glow, unleashed a flurry of protest on Twitter. Most of it came from non-Minnesotans who summed up Pawlenty as  generic, boring and unknown.

“He raised taxes, supported cap and trade, and where was the striking social reform — what did he do for the social conservatives?” wonders Parrish, former chief of staff for Michele Bachmann. “I don’t see what he’s done.”

Aplikowski believes Pawlenty did plenty — for the other side.  “There was a surplus; he spent it,” he said. “He supported both the Hiawatha and Central Corridor light rail projects,” instead of focusing on highways and maintenance. “The whole 35W bridge collapse was handled badly, although the collapse was not his fault”

John Gilmore, a St. Paul activist, said it’s not only that Pawlenty isn’t the answer but that he also spurs more questions. “Pawlenty would raise concerns among the conservative portion of the base that believes Romney isn’t as conservative as he said he is,” said Gilmore.  “He raises the RINO [Republican in Name Only] possibility.”

All three view Pawlenty’s own presidential aspirations as a liability.

Aplikowski said the goal of the White House made Pawlenty a “triangulator” during his last two years in the governor’s office. For Gilmore, it was the kind of campaign Pawlenty ran.  “This is someone who quit after the straw poll,” he said.  “His poor campaign confirmed that he lacked national gravitas.”

OK, then, who has the punch, the geographic pull and the personality to fill in what voters see as Romney’s many blanks? 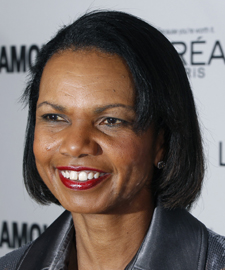 Condoleezza Rice is the first name mentioned by Parrish and Aplikowski, somewhat surprisingly, given her moderate views on abortion.

“You’ve got to go to someone who’s been in D.C. and understands how it works,” said Parrish.  “Rice would be a good choice, she’s no base conservative but … she brings the foreign policy experience that Romney’s lacking, the D.C. experience that he’s looking for.”

Gilmore, however, believes Sen. Rob Portman of Ohio, Virginia Gov. Bob McDonnell or Florida Sen. Marco Rubio would deliver the geographic diversity and electoral votes crucial to a Romney victory. Minnesota, with its 10 electoral votes and history of not delivering a majority for a Republican presidential candidate, is simply not a contender.

Also, those possibile candidates, plus a few more said to be on Romney’s vice presidential short list, don’t have the blemish of once being a Romney rival.

According to a Pew Research poll in January, Parrish says, Republicans didn’t like who was being offered up for nomination during the primary and caucus season. “The Republican base was not satisfied with the group by a huge margin, so why would Romney go back to that group?” he said.

The Romney campaign, which by its nature and makeup is cautious, will take note of the reaction to Pawlenty, here and nationally. The veepstakes in 2012 require extra care, given the storm created by John McCain’s selection of Sarah Palin in 2008.

That filter would make the custard-smooth Pawlenty the ideal, safe choice that Romney’s looking for. But Parrish views Pawlenty as more stolid than safe. “He’s vanilla,” he said.

For Gilmore, picking Pawlenty “would be an unserious choice. It would be a failure that would dog Mitt Romney for the balance of the campaign. He can’t afford to make a misstep of this nature.”

Aplikowski has kinder words, but they are not likely to soothe the base. “Pawlenty’s a good Republican but not a great conservative.”