A June poll showed support for the effort to amend Minnesota’s constitution to ban same-sex marriage eroding rapidly, with 49 percent of those surveyed planning to vote against the measure, vs. 43 percent in support.

A poll released Sunday, however, shows 52 percent voting yes vs. 37 percent no.

Both surveys were conducted by reputable polling concerns with respectable track records. Neither relied on a methodology that invites suspicion. And no dramatic, opinion-changing turn of events occurred in the interim.

So is the 20-point swing real? And if so, what explains it?

We asked Bill Morris, principal of Minneapolis-based Decision Resources, which polls voters on a range of local and regional policy issues including, this year, the marriage amendment.

“If this is correct, then what’s happened is supporters have been able to make really significant inroads into groups that had been leaning against the amendment, if not totally opposed to it,” he said. “But no one I’m aware of is seeing that.

“We’re still showing [the ballot question] within a four- to six-point range, with absolutely no breakout by one group or another,” he added.

Additionally, the unusual breakdown of answers in the poll’s “crosstabs” — the subsets of data in which respondents identify their gender, political affiliation and other characteristics — gives him pause.

In June, North Carolina-based Public Policy Polling (PPP) reported that 49 percent of Minnesota voters oppose the idea of inserting a gay marriage ban into the Minnesota Constitution, up from to 44 percent four months earlier [PDF]. Support for the ballot question had fallen from 48 percent to 43 percent.

The new poll was conducted by SurveyUSA, a company that undertakes surveys for television and radio stations, in this case KSTP-TV. It found that 52 percent would vote for the amendment, while 37 percent oppose it. Another 5 percent would not vote on the issue; if they cast ballots but leave the amendment blank, it will count as a “no” vote under Minnesota law.

The new numbers also contradict a SurveyUSA poll conducted in Minnesota in May, when slightly more than half of respondents agreed with President Barack Obama’s then newly announced stance in favor of legalizing same-sex marriage, compared to 42 percent who disagreed.

Add to this research that shows voters underreport their anticipated votes in favor of a gay-marriage ban by an average of  7 percentage points, most likely out of fear of disclosing bias to interviewers.

Dramatic swings in public opinion are possible, Morris said. But he’s hard-pressed to explain this one.

“I could see this happening if suddenly the [amendment] proponents had gone on TV and spent a couple million dollars on ads and followed them with a direct mail campaign,” he said.

Over the course of three days last week, SurveyUSA surveyed 552 people it determined were likely 2012 voters using a “blended sample,” or “mixed mode,” which Morris explained is a pool of possible respondents that includes households with land lines only, unlisted numbers and cell phones only. This is important because cell-only households are more likely to be liberal, affluent and educated. 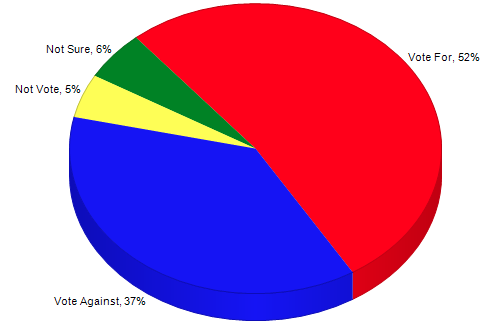 For this survey, 74 percent of respondents were “interviewed” on their home telephone “in the recorded voice of a professional announcer,” SurveyUSA reported. “Respondents not reachable on a home telephone (26 percent of likely voters) were shown a questionnaire on their smartphone, tablet or other electronic device.”

While polling using a computerized “interviewer” isn’t new — PPP’s June Minnesota poll was conducted by a recorded voice — it’s the first time Morris has heard of a blended poll that includes a written survey.

“My hunch on that is that you’re getting [texted responses from] a much more active segment and you’re getting people who are much more strongly concerned with the particular issue you are raising,” he said.

More perplexing, he said, are the crosstabs. For starters, there is no gender gap in the July poll, despite the fact that women are almost always much less likely to say they will vote to outlaw gay marriage.

Next, he noted that 44 percent of voters ages 18 to 34 said they will vote no, and only 38 percent of those 35 to 50. “It not only reverses what we’ve been finding and other polls have been finding, it’s in the vicinity of 20 points,” he said.

At the same time, the number of respondents who identify themselves as Tea Party sympathizers was just 6 percent, vs. the 14 percent Morris is used to seeing in Minnesota polls. And opposition among DFLers, pegged at 54 percent by SurveyUSA, is much higher than usual 2-to-1 ratio.

Nor do the crosstabs laying out where respondents live jibe with other polls, he said. SurveyUSA found 49 percent of Twin Cities residents favor the amendment, while 40 percent oppose it. In Morris’ polls and those he’s seen, opposition is, again, 2 to 1 — even in conservative western suburbs.

And SurveyUSA found 64 percent of residents of northeastern Minnesota would vote for the amendment and 29 percent against it, the exact opposite of what Morris’ data show.

So what explains the divergent results? Morris can offer a few possibilities — none of which suggests shoddy or biased polling.

The margin of error reported by SurveyUSA is 4.3 percent, he noted, which is no higher than 95 percent of polls. The other 5 percent, however, can have much, much higher error rates.

Also, the firm did not report whether it “weighted” the results. To offset, say, an imbalance in male and female respondents, some pollsters adjust each answer to count for more or less than a single vote to compensate. Morris’ firm doesn’t do much weighting because it’s too easy to end up with a skewed result, he said.

“If we accept that this is accurate, proponents have somehow managed to assemble a coalition,” Morris said. “And a remarkably tight one.”

This is, of course, exactly what proponents are saying about the new poll. It’s a good tactic, and at the heart of the vote no camp’s campaign playbook, too. Still, for the new numbers to be solid, it would have to be working unusually quickly and well.

“They’ve managed to convert a number of folks that would normally be in the other camp,” Morris said. “And they’ve done it without much in the way of a visible campaign.”

In the end, he sees no obvious explanation. It might, he offered, just be “flukey.”

New marriage-poll results: a dramatic change in voters’ views — or a fluke?