A key Senate committee is investigating Secretary of State Mark Ritchie’s conduct related to the Photo ID and Marriage constitutional amendments slated to appear before voters in November.

Republicans, and committee chairman Mike Parry in particular, expressed the view that Ritchie could be improperly campaigning against the Voter ID amendment during what he has billed as “educational” talks with local elections officials.

Adding to the political theater surrounding the amendments — which also includes multiple lawsuits and disputes over the amendment’s ballot titles — neither Ritchie nor Swanson showed up to testify before the committee.

The secretary of state has stayed out of the limelight since recently renaming the amendments.

Parry said he is concerned that Ritchie could be violating two sections of campaign finance law, namely making misleading statements to the public and not registering his activities as a ballot question committee.

“Is there an active campaign by the secretary of state’s office … to actively campaign against a constitutional amendment?” Parry asked members of the committee.

Parry, Sen. Dave Thompson and Sen. Paul Gazelka led the push criticizing Ritchie’s alleged partisan abuses. The secretary of state, who is halfway through a four-year term, has raised many concerns about the impact of the proposed Voter ID amendment.

Ritchie and other activists are concerned that the amendment could end Election Day registration in Minnesota — a contention Republicans vehemently reject — and could change standards for in-person and absentee voting. They also have raised issues with the implementation of provisional balloting, which they say could significantly expand the timeframe of declaring election winners.

Because Ritchie and Swanson were absent from the hearing, Democrats on the committee stepped in as surrogates to defend the partisan constitutional officers.

“That is definitely his duty,” DFL Sen. Barb Goodwin said. “It’s his duty to tell people what he thinks this law will do.”

Among those testifying were Sen. Scott Newman, the Photo ID amendment’s chief author in the Senate, and Dan McGrath, executive director of the conservative political group Minnesota Majority. 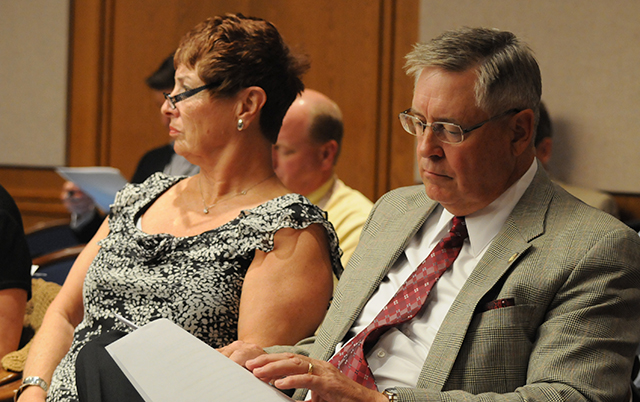 “The secretary of state appears to be actively campaigning against the Photo ID amendment,” McGrath told the committee.

Gary Goldsmith, executive director of the nonpartisan state Campaign Finance and Public Disclosure Board, was reluctant to address the committee’s main question: Do Ritchie’s actions count as an educational initiative or as a campaign against the amendment.

There are “too many facts that are not known,” Goldsmith said.

Adding to the confusion, Parry and Sen. Julianne Ortman are part of the two lawsuits Republicans have filed against Ritchie for renaming the amendments. Their attorney actually prevented a representative from the attorney general’s office from testifying before the committee.

Because the naming issue is under litigation, Bert Black, an attorney in the secretary of state’s office, also was reluctant to speak broadly to many of committee members’ questions.

Parry said his committee has the power to issue subpoenas, bring the matter to court or attempt to recall Ritchie. A timeframe for potential action is unclear.

“This is a serious matter, and we need to continue to address it and follow it with open transparency,” Parry said.

The original title, passed by the Legislature in April, is “Photo identification required for voting.”

In late June, Ritchie renamed the marriage amendment to read: “Limiting the status of marriage to opposite sex couples.” Its original 2011 title is “Recognition of marriage solely between one man and one woman.”

Republicans, including Thompson, raised the same issues that the GOP-led Legislature has made before the courts: Ritchie breached the separation of powers in usurping the Legislature’s authority to name the amendment.

“This is a separation of powers issue,” Thompson said. “Clearly the constitution grants the Legislature the power” to name amendments.