When first Tim Pawlenty and then Michele Bachmann dropped out of the race for president, Minnesota’s role as a major player in the presidential election campaign diminished considerably.

Still, Minnesota is a big-time producer of presidential surrogates, with Pawlenty taking on a major campaign role on behalf of the GOP’s presumptive presidential candidate, Mitt Romney, and Minneapolis Mayor R.T. Rybak filling similar duties on behalf of President Obama.

Rybak is the first to admit that Pawlenty’s closer “to the top” than he is. That lesson became very clear when the two boarded the same flight out of Des Moines recently.

The two exchanged pleasantries, but the chat ended quickly.

“It’s hard to carry on a conversation when he was in first class and I was in coach,’’ said Rybak, laughing.

There are other things that mark differences between the two surrogates.

Pawlenty often introduces Romney at rallies. The formerly mild-mannered governor and tepid presidential campaigner has become an attack dog on behalf of Romney.


He went after one of Romney’s holdout Republican foes, Newt Gingrich, with gusto.  Now, he’s showing the same go-for-the-throat style in attacking the president.

“We’ve had enough of his [Obama’s] flapping his jaw,’’ Pawlenty said during an introduction of  Romney at a rally a few weeks ago in New Hampshire. “We need someone who actually is going to do the job and get results, and that’s Mitt Romney!’’

Almost forgotten is that candidate Pawlenty once mocked Romney’s centerpiece action when he was governor of Massachusetts. That program, popular in Massachusetts, features an insurance mandate.

“Obamney care,” Pawlenty called it in an interview while he was running for president.

Many trace the demise of the Pawlenty presidential campaign to Pawlenty hemming and hawing when he was invited to use that term in a face-to-face debate with Romney. The refusal to repeat his earlier comment to his opponent’s face made him appear weak.

But “Obamney care’’ was then. This is now.

Now Pawlenty is the frequent face and voice of Romey in television interviews and at Romney rallies. The two are together so often that Pawlenty’s name frequently has been floated as a possible vice presidential running mate.

For the moment, Pawlenty as a VP candidate is on the back burner again. Pawlenty recently said that he wants the Romney campaign to “look elsewhere” for a VP prospect.

That doesn’t mean the door is closed on the running mate position, because nothing is ever permanent in politics. And Pawlenty, who was not available to comment for this article, continues to travel the country on Romney’s behalf.

Meantime, Rybak spends most weekends on the move on behalf of the president.  His ties to Obama run relatively deep. It was, after all, the Minneapolis mayor who was among the first Democratic politicians to urge the Illinois senator to run for president. He’s been an enthusiastic supporter ever since.

His enthusiasm and charisma landed him a prestigious political spot as one of five vice chairs of the Democratic National Committee, which is the principal organizing body of the Democratic Party. He’s also president of an organization of Democratic mayors. Those roles mean he’s traveled the country — at DNC expense — on behalf of the president’s re-election campaign. 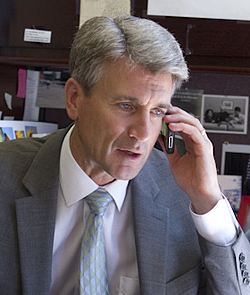 “I wouldn’t do this for just anybody,” said Rybak of his heavy campaign schedule. “I do this because I believe in this president.”

Rybak does not get the prime-time role that Pawlenty does. The mayor, for example, is not as likely to be the guest on a major network Sunday morning show.

But he probably is involved in more nitty-gritty political work than Pawlenty.

For instance, it’s Rybak who frequently shows up as a representative of the campaign when new, local campaign headquarters are opened.

Following these openings, Rybak said, he frequently sits down to talk in “round-table discussions” with local volunteers about the issues and the president’s message.

“It’s really my favorite part of the job,” said Rybak of these discussions with volunteers. “We all hear about the millions and millions of dollars being spent on these campaigns. But you know, there’s still that woman in Sioux City who’s showing up at a campaign office day after day to volunteer to make phone calls. That inspires me.”

Rybak never has been accused of being media-shy in his decade as mayor of Minneapolis. But as a surrogate, he said, he’s much more mindful of what he’s saying.

“I’m comfortable with the media when I’m speaking on behalf of myself,’’ said Rybak. “If I make a mistake in that circumstance, it’s on me. But when you’re a surrogate, there’s a small voice in the back of your head telling you, ‘Don’t blow it for this guy.’ ”

Although it’s the Pawlentys of the political world who get most of the surrogate face time, there are still scores of opportunities for players such as Rybak. Given the 24-7 nature of cable news and all of the political talk shows, there’s an unending need for surrogates to fill the airwaves with political chatter. On Sunday morning, for example, he was at the WCCO-TV studio in downtown Minneapolis doing feeds that appeared on Fox News and CNBC.

These appearances have led to Rybak getting national feedback from viewers — not always friendly.

After an appearance with Fox celebrity news host Bill O’Reilly, Rybak was the recipient of considerable feedback, much of it about his hair.

Conservative viewers apparently did not approve of it.

“I was getting comments [on O’Reilly’s Facebook page) from people who wondered where I bought such a cheap rug; there was somebody who thought it must be horse hair,” Rybak said.

He does not seem to be feeling hurt by the comments.

As a surrogate, Rybak receives daily emails from the Obama campaign containing the message of the day.  But, he says, he has the freedom “to use my own voice” in how those messages are put forward.

The campaign experience has given him an appreciation for the grueling lives the candidates lead.

“I’m just getting a small fraction of what they do,” said Rybak of a Pennsylvania swing, “and it’s still remarkable. In one day, I went from Scranton, to Bethlehem to Philadelphia. It’s just not that hard to forget what city you’re in.”

His big hope is that during the campaign, he and Pawlenty will actually be able to hold a surrogate debate, perhaps even in Minnesota.

There has been speculation that if Romney wins, Pawlenty could end up with a cabinet position.

Does Rybak hold hopes of a spot if there’s a second Obama administration?