The Minnesota Supreme Court heard a round of “power” arguments on Tuesday over who has authority over two Republican-backed constitutional amendments set to appear on the November ballot.

The arguments — separate from a case the court heard in mid-July over the actual Voter ID ballot question — center on whether the legislative or executive branch controls the wording of constitutional amendment titles.

The court merged two separate lawsuits from legislators who claim that DFL Secretary of State Mark Ritchie used his political position to mischaracterize the titles of both amendments.

The attorney general’s office, on behalf of Ritchie, argued that a 1919 statute gives the executive branch (the secretary of state in conjunction with the attorney general) final authority over ballot question titles. 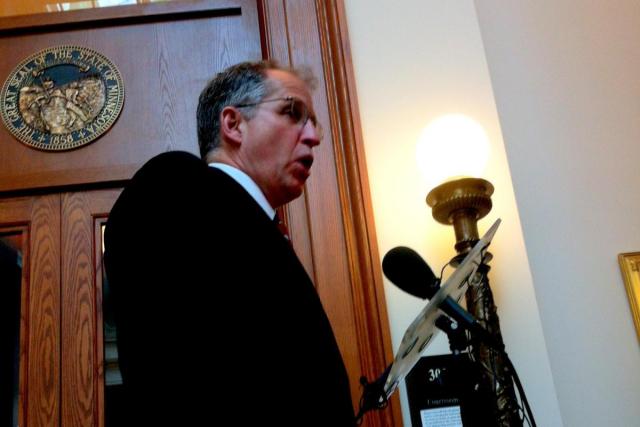 MinnPost photo by James Nord Jordan Lorence, an attorney for GOP lawmakers, said the Republican-led Legislature should be able to name the two amendments.

Jordan Lorence, an attorney with the Alliance Defending Freedom who represented the Republican lawmakers, said the Legislature has the constitutional authority to propose ballot question titles or to choose to delegate that responsibility to the secretary of state. In this case, he said, the executive branch overstepped its bounds for political purposes.

“The question before the court is not the politics,” Lorence told reporters after the hearing. “The legal question is: ‘Who is the final authority?’ and we think it’s clearly the Legislature.”

But Solicitor General Alan Gilbert, representing Ritchie, said that Gov. Mark Dayton’s vetoes of the two constitutional amendments – as well as a state statute that says the secretary of state “shall provide an appropriate title for each question printed on the … ballot” – requires the executive branch to intervene in the ballot question title.

Gilbert also warned that if the courts stepped in to limit the executive branch’s authority over amendment titles, it could jeopardize 90 years of constitutional amendments that the citizens of Minnesota have passed.

“I don’t want to be an alarmist here,” Gilbert said. “It’s just a consequence of 90 years of doing it one way and then somebody coming in 90 years later and saying, ‘Well, the secretary didn’t have authority to do it.’ ”

The high court is expected to rule by late August in keeping with the timetable necessary for the secretary of state’s office to prepare ballots. Associate Justice Helen Meyer is sitting out the case in anticipation of her retirement, leaving six justices on the bench.

The typically inscrutable court didn’t offer many hints into how it might rule, though there were several interesting comments. Chief Justice Lorie Skjerven Gildea, for example, appeared to side with the Legislature.

“If [the title] has an impact on the voters, then I can’t understand why it’s not part of the Legislature’s exclusive authority … to propose amendments to the people,” she told Gilbert. “In other words, I think this is a deal between the legislative branch and the people of Minnesota and that’s it.”

She then beat back Gilbert’s protests that such a precedent would upset years of history.

“The fact that somebody has been behaving unconstitutionally for years … that doesn’t make it right,” Gildea added.

Associate Justice Paul Anderson, a lively questioner in both lawsuits, seemed to lean toward cutting the titles and simply placing the entire questions on the ballot.

“These are emotionally charged, politically motivated amendments, and I see an almost unsolvable problem because one side is going say it’s described this way, one side is described the other and I see problems with both descriptions,” Anderson said. “Do we have a power to say a pox on both houses?”

The Voter ID amendment would require in-person voters to show a photo ID before casting a ballot and also would implement a new provisional balloting system. The marriage amendment would define marriage as between one man and one woman in the Minnesota Constitution.

Earlier, Ritchie renamed the marriage amendment to read: “Limiting the status of marriage to opposite sex couples.” Its original 2011 title is “Recognition of marriage solely between one man and one woman.”

Ritchie, who has remained largely silent about the lawsuits, released a statement after the hearing.

“I appreciate the Minnesota Supreme Court’s effort to address this separation of powers issue and look forward to their decision and specific instructions,” he said. “As the attorney general’s counsel explained before the court, providing a title for each proposed Constitutional Amendment has been the responsibility of the Minnesota Secretary of State since 1919. Under state statutes no other agency or branch of state government currently has this authority.”

Who has power to name amendments? Supreme Court poised to settle dispute