In late June, a line of severe thunderstorms moved rapidly across the East Coast, knocking out the power for more than 4 million people in 10 states and the District of Columbia.

Suddenly, they were without the modern conveniences most of us take for granted — electric lights and appliances, televisions and home computers, fans and air conditioners — all in the midst of a sweltering heat wave. Candles, flashlights and bags of ice became precious commodities during the outage, which lasted as long as a week for many residents of the region.

"You wouldn't want to live this way more than a day or so," an elderly Maryland woman told the Associated Press.

While such widespread outages are not common, the Citizens League of the Twin Cities says the U.S. power grid “has become continually less reliable as increasing demand has outpaced infrastructure investment.” By one estimate, power outages drain $79 billion a year from the nation’s economy.

“Furthermore, our electrical system is unsustainable,” says the league, a nonpartisan public policy research group. “Our reliance on fossil fuels has detrimental impacts on health and the environment, and these resources will someday run out.”

For these reasons, the league has undertaken a study to determine what Minnesota’s electrical system should look like in the long term and what kinds of policy changes may be necessary to achieve these goals.

The league has engaged about 150 Minnesotans from diverse perspectives – including representatives from the utilities, energy and environmental groups, business, government and academia – to help identify the key characteristics of an “ideal” electrical system.

“The next steps in this project are to examine whether we are on track to meet these goals and to imagine changes that will get us on track where we are not,” the league says.

In a working paper (PDF), the league says Minnesota and the Midwest are better off than many areas of the country when it comes to the reliability of the grid. It says the Midwest averages 92 minutes of power outages per year, compared with 214 minutes per year for the Northeast.

11 utilities team up on upgrade

Moreover, the 11 utilities serving Minnesota and the region have come together to undertake the first major upgrade of the grid in 30 years. Called CapX2020, the first phase of the initiative provides for transmission line improvements costing $1.7 billion.

This initiative will help “in moving renewable energy from the west to the east and making the system more reliable and redundant so that we don’t have serious outages,” says Rick Evans, director of regional governmental affairs for Xcel Energy, Minnesota’s largest electric utility.

Nonetheless, business leaders say price must be a major focus as the state looks to the future – for the simple reason that the cost of energy is an increasingly significant concern for businesses as they decide where to locate and expand.

“Our rates on average are still below the national average, but they are increasing faster than our neighboring states with the exception of Wisconsin,” says Bill Blazar, senior vice president of the Minnesota Chamber of Commerce.  “And they are going up faster than the rates in states we frequently compete with for jobs.”

“There also is enormous variation in rates around the state,” Blazar says. “They tend to be lowest, from a business perspective, in northern and northwestern Minnesota, and least competitive in southeastern Minnesota and into the Twin Cities.”

The major questions about the state’s electricity future revolve around our sources of power, and the economic and environmental impacts.

According to the league, Minnesota generates 58 percent of its electricity from coal, followed by 23.7 percent from nuclear, 10.7 percent from wind, 5.2 percent from natural gas and the rest from other sources. The eight coal-fired plants in Minnesota provide nearly 5,000 megawatts of generating capacity.

Coal-fired plants increasingly have become targets of federal and state regulators, as well as environmental groups, because of their impact on the environment and climate change. Electrical generation accounts for about a third of Minnesota’s greenhouse gas emissions, according to the league.

In recent years, Xcel Energy has retired two aging coal-fired power plants — the High Bridge plant in St. Paul and the Riverside plant in Minneapolis — and replaced them with new natural gas plants, which have reduced harmful emissions, such as nitrogen oxide, sulfur dioxide and mercury, by 97 percent or more. This was done primarily to help the two cities remain in compliance with federal air quality standards.

Now, the utility is evaluating the future of both the Blackdog plant in Burnsville and the Sherco plant in Becker.

Xcel’s Rick Evans says the 538-megawatt Blackdog plant, which dates to the 1950s, is “coming to the end of its useful life” and could be replaced natural gas plant — if it is replaced.

“With natural gas prices coming down and projected to remain low, a gas plant probably makes more sense there,” Evans says. “But at this point, we’re not seeing our demand for energy grow as a consequence of the economy and other factors. So that’s a decision that will probably be made down the road somewhere.”

The 2,400-megawatt Sherco plant, the first units of which were built in the 1970s, is much more central to Xcel’s operations. Company officials say they are evaluating investing in additional emissions controls on the plant’s two older generating units or replacing them with a natural gas facility.

The Rochester Public Utilities board recently completed a similar evaluation and decided this week to close its coal-fired Silver Lake generating plant. The utility says it can buy electricity on the open market more economically than upgrading the aging plant, which dates to the late 1940s.

Michael Noble, executive director of the advocacy group Fresh Energy, believes the region’s aging coal plants “face hundreds of millions of dollars in upgrades and may not be economically viable to meet modern air-quality requirements. Alternatives are going to be more economical than (throwing) good money after bad.”

Nuclear power, once the hot energy issue in Minnesota, appears to be a settled question – at least in the near term.

The 600-megawatt Monticello nuclear plant and the 1,100-megawatt Prairie Island plant, which began operations in the early 1970s, each have had their 40-year licenses renewed for another 20 years. This means Xcel can continue operating Monticello until 2030, and Prairie Island units 1 and 2 until 2033 and 2034 respectively.

“All that stuff [about nuclear power] that has debated in the past is not on the radar screen,” Noble says. “Older nuclear power plants that are being refurbished and retooled and modernized are going to be part of the [energy] mix for a minimum of 20 or 25 years, without any doubt.”

After that, who knows? “Frankly, we don’t have any nuclear plants in the country that have been around for 60 years,” Evans says, so their future beyond the current licensing period “is something that needs to be addressed.”

Meanwhile, renewable energy is becoming an increasingly important source of the state’s energy portfolio. Minnesota's Renewable Energy Standard requires utilities to deliver 25 percent of their electricity from renewable sources by 2025 (Xcel Energy is mandated to deliver 30 percent by 2020, with 25 percent from wind).

Evans says Xcel is “on pace” to achieve those requirements, which once looked very ambitious. “When I started with the company 10 years ago, the engineers were saying they weren’t sure we could manage more than 10 or 15 percent from wind on the system.”

Unfortunately, renewable energy is no substitute for coal, natural gas or nuclear power.

Minnesota electricity use by type 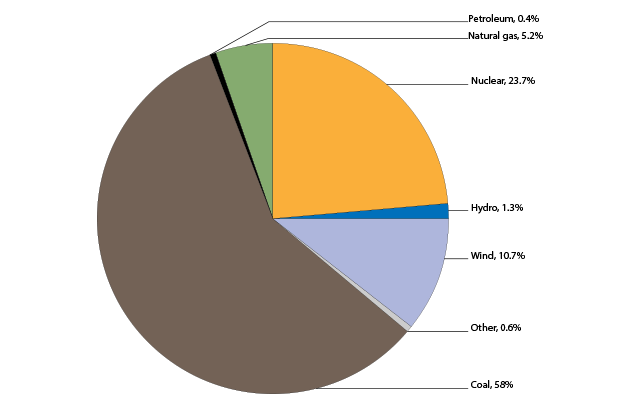 “With current technology, we can’t rely on wind or solar for baseload needs for the reason, obviously, that it may not be there when you need it,” Evans says. “If the day ever comes when we have cost-efficient methods to store renewable energy and use it when the wind is not blowing and the sun is not shining, then potentially we could use it like a baseload resource.”

One policy option embraced by nearly everyone is conservation.

In June, Xcel filed a three-year conservation improvement plan that includes 56 energy-saving programs for residential and business customers. It is designed to meet the state goal of reducing demand by 1.5 percent, or enough power to serve the energy needs of 155,000 homes for one year.

Since 1992, the utility says, its conservation efforts have saved enough electricity to avoid the need to build nearly 10 medium-sized power plants in Minnesota.

“We’re basically building ‘energy conservative power plants’ – that’s one way to look at it,” Noble says. “They’re low cost, incredibly reliable, distributed throughout the energy grid. We’re reducing energy consumption 1.5 percent a year now, and it appears there is no end in sight.”

Annie Levenson-Falk, project manager the Citizens League study, says one idea the league intends to pursue is “tiered pricing” to encourage greater conservation efforts. It’s a simple idea: the more you use, the higher your rate.

Another possibility is encouraging the development of “distributed generation.” It involves moving away from large, centralized generating plants to small-scale technologies, such as solar panels to produce electricity close to the end users of power — with little reliance on the transmission grid.

Evans says Xcel intends to spend some time exploring this idea over the next several years. “It’s a significant change from the model we’ve employed for many, many years for producing and selling electricity, so it has implications not obvious to most people when they first start thinking about it.”

If you have a solar panel on your roof, Evans says, you will still be connected to the grid for electricity “when the sun isn’t shining.” So utilities will still need such customers to help pay for the larger generation and transmission system.

Last week, the Citizens League concluded a series of six workshops around the state to seek public input for their study. It is not expected to be completed until sometime next year.