Politics is so important at the Minnesota State Fair that this year there’s a designated political map.

The Green, Independence, Constitution and, of course, Republican and DFL parties have staked out temporary homes at the fair, along with candidate booths and groups promoting ballot initiatives.

And why not?  An average of 150,000 people visit the fairgrounds each day of its 12-day run, visitors who are polite, curious and tolerant of anything offered with Midwestern sincerity, be it a corn dog or sign-up sheet.

The Protect My Vote booth was a particularly busy spot Wednesday, given its speck of a presence on Underwood across from the kiddie rides. The group is promoting the proposed constitutional amendment that would require voters to provide a photo ID and change voting procedures for absentee ballots and same-day registration.

“We are extremely busy – and happy,” said volunteer Dorothy Fleming, who got an earful from a visitor who said he saw a news report showing someone walking away from a voting booth with a fistful of absentee ballots. “We get the best feedback from the people who stop by.”

That’s the beauty of politics at the fair, where the carnival spills over from the Midway to the mainstream and fosters, if not a free-for-all of ideas, at least an opportunity to vent to a like-minded political volunteer.

Power of the polls

Valda Santee of Lime Springs, Iowa, crossed the border to sport her “Women for Obama” button and spend a little time with the DFL at its sprawling (for the State Fair) set-up. “These are the kind of people who are hateful,” she told a volunteer, commenting on Republican attacks on President Obama. “We ain’t going to change people, but we have the power by going to the polls.”

The volunteer represented Minnesotans United for All Families, the group urging a no vote on the proposed marriage amendment. There’s a Minnesotans United booth just down the street, where, their volunteers and literature appeared to outnumber the people and  purely political material at the DFL location.

The Republican operation on Carnes had a more establishment feel – names and photos of candidates, information on the party platform, a loop-to-loop video featuring the speech given Tuesday night by Ann Romney at the Republican National Convention in Tampa. Republicans, too, view the fair as an open-air forum for debate and straight talk.

“There were a few comments about the Minnesota delegation at the convention and Ron Paul,” said volunteer Scott Garoutte, referring to embarrassment among some Republicans over the delegation’s refusal to back Mitt Romney and its visible anger over a change in convention rules.

Of note at the Republican booth: There was no “vote yes on the marriage amendment” presence, save for a simple sheet of information, but no buttons, signs or volunteers. The difference among the two major parties is telling. While DFLers consider the “vote no” campaign a boost to their turn-out and election chances, Republicans have come to believe the issue could actually hurt them at the polls.

For fair-goers who thirsted for a little more blood in their politics, there was a debate. U.S. Rep. Keith Ellison and his GOP challenger in the 5th District, Chris Fields, faced off at the Minnesota Public Radio booth and offered listeners and spectators some clear differences in their political approach.

Ellison ticked off a list of projects in Minneapolis he helped fund by procuring federal support. He also supports a tax increase on the top 2 percent of wage earners. And he said he sees government-funded programs like transportation as key to raising employment. 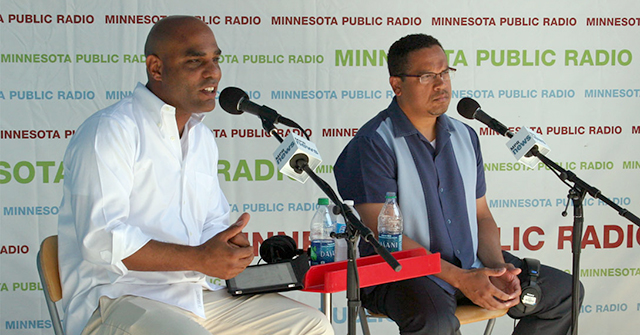 MinnPost photo by Brian HallidayChallenger Chris Fields and Rep. Keith Ellison debating the issues in front of the State Fair crowd on Wednesday.

Fields said closing the achievement gap is the way for minorities to advance. He advocates lowering business taxes to encourage employers to expand and increase hiring. He not only opposes tax increases, he had a specific tax he wants to lower: Tips in the service industry should be tax free, he said, which should be helpful for the many service workers in his district.

The debate was punctuated by hoots and cheers from Fields and Ellison supporters. But the crowd of more than 100 that gathered in front of the MPR studio on Judson included more than political staff or 5th District residents. They were the fair-goers, the Minnesotans who know that the State Fair is the unofficial end of summer and the official start of the election season.