The U.S.-Dakota War of 1862 and its aftermath was a tragic and horrific turning point in American history, marking the beginning of the U.S. government’s systematic removal and extermination of the indigenous people of the American west. Much attention has been paid this year to recalling and analyzing these events, and rightly so. 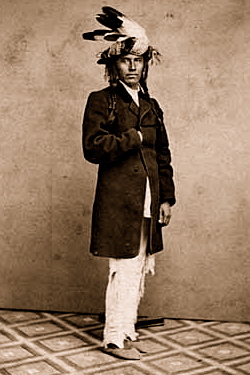 Courtesy of the Minnesota Historical SocietyHole in the Day

But sometimes the “what ifs” of history are interesting as well. The same week that the U.S.-Dakota War began in southern Minnesota, the Ojibwe tribes to the north were on the brink of conflict with the U.S. Army.

In this video, Dr. Anton Treuer, historian and author of the book “The Assassination of Hole in the Day,” explains how an Ojibwe leader named Hole in the Day capitalized on the timing and geography of the Dakota War to deceive, manipulate and bluff his own people as well as the U.S. government to gain advantage in negotiations with the government for the benefit of Minnesota’s Ojibwe tribes.

Treuer says that Hole in the Day’s risky strategy could easily have ignited into a war that would have been bigger, bloodier, longer-lasting — and more difficult for the U.S. troops to win — than the Dakota War.

Hole in the Day was shot and killed on June 27, 1868, in Minnesota while traveling to Washington, D.C., to fight the planned removal of the Mississippi Ojibwe to a reservation at White Earth.

And for more on the events of 1862 in Minnesota, see my earlier video.

Intriguing ‘what if’ of Dakota War history: Hole in the Day’s big bluff