With a degree of pride, Fadumo Yusuf, a Somali immigrant living in Fridley, offered her photo identification when she showed up at the Protect My Vote rally at O’Gara’s bar in St. Paul. She knew it wasn’t necessary but wanted to make a statement of her support for the proposed constitutional amendment on the November ballot. 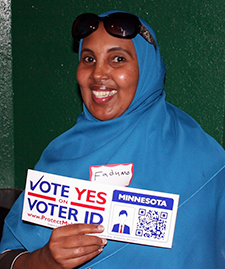 “I believe that passing this law, having a photo I.D. is good,” she said Monday night. As an immigrant, she said, she frequently encounters requests for identification and cannot understand the opposition. “What are you hiding, why are you refusing?” she wondered.

Yusuf reflected the tone of the crowd of about 100 at what was billed as a kick-off of the campaign to pass a constitutional amendment requiring photo identification before casting a ballot and other changes in voting procedures.

The event featured Wall Street Journal writer and author John Fund, whose recent book “Who’s Counting” describes the recount travails of the 2008 Minnesota U.S. Senate race, won by Al Franken by 312 votes. Fund’s premise is that the pros and cons of the voter identification boil down to a clash of visions.

“It is so important that we have the maximum possible voter turnout, everything else is unimportant or secondary,” he said in an interview, describing opposition to voter I.D. “It’s the right not to be blocked from voting versus the right not to have your vote canceled out by someone who shouldn’t be voting.

“I don’t think this is a left right-issue. I think this is an up-or-down issue. If this were a left-right issue, it would be polarized outside the political elites, 50-50.”

Most polls show support for similar voting amendments crosses party, gender and race lines. In Minnesota, polling consistently has shown a wide margin of support for the proposed amendment.

“Voter fraud is bipartisan,” Fund said, for partisan gain. “There’s stuff going on behind the curtain that they prefer not to see.” 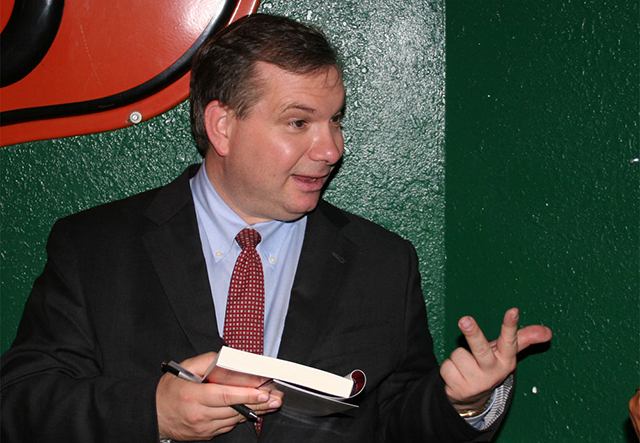 Fund acknowledges the good intentions of opponents like the Our Vote, Our Future campaign. They argue that the most vulnerable citizens, without up-to-date identification, would be disenfranchised, unable to penetrate the bureaucratic maze to procure valid documents.

State GOP Rep. Mary Kiffmeyer, the former Minnesota secretary of state and author of the voting amendment legislation, says that if the proposal becomes law, it will be “very generous” in accommodating all voters. “The law will require a valid, government-issued photo ID or substantial equivalent to make sure that the disadvantaged get IDs,” she said, stressing the word “equivalent.” 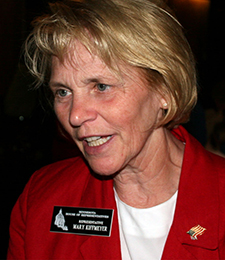 In an interview at the rally, she ticked off a list of what she said were protections: the I.D.s will be free, outreach will be substantial and the law will provide for an expansion of provisional ballots that will allow a person without valid identification to vote on Election Day and provide proper verification of identity with a week.

Opponents say the details of these protections are not spelled out in the language of the proposed constitutional amendment and remain a hazy goal of additional legislation.

Kiffmeyer expressed confidence that the 2013 session of the Legislature will accomplish that goal, with a minimum of obstruction.

Secretary of State Mark Ritchie argues  that the requirement that voters must show a photo ID at the polls is only a small part of far-reaching language that actually would end up dismantling or significantly altering absentee balloting and Minnesota’s popular Election Day registration system.