In the final days before the election, it appears that the Republican grip on the state Legislature is slipping away. 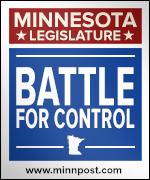 The DFL appears poised to regain control of the state Senate, although most believe the GOP will retain a slight majority in the House. Those findings are based on interviews with a wide swath of candidates and insiders from both parties who are following the races closely — and on MinnPost’s analysis of 28 highly competitive races.

But an array of factors — ranging from how well the marriage amendment plays in the suburbs to redistricting to the massive influx of spending by independent groups to the state’s overall turnout — could put the DFL back in control of the House as well.

Never has so much been spent on state legislative races, and seldom have so many of those races remained so tight leading up to Election Day.

A swing of seven seats is needed for the DFL to take back a majority in the House, and a net gain of four seats would give the DFL back its historic control of the Senate. Currently, Republicans control both chambers, the Senate 37 to 30, and the House 72-61. Because of redistricting, all 201 legislative seats are up this time.

How MinnPost’s 28 races are shaping up

MinnPost has been closely following 28 of the most competitive legislative races that insiders believe could determine which party would have control. (See our interactive guide here.)

Of the 12 Senate contests, the DFL appears poised to win three Senate races (a pickup of two seats) and the Republicans are likely to retain three seats. The other six include three slight leads for the DFL and one for the GOP with the remaining two races “coin flips” as to who will win. One prominent DFL insider believes the party has a lock on 32 seats, which would mean it would need only a net gain of two among the six MinnPost races and several others the DFL is targeting.

Of the 16 House races MinnPost is tracking, the DFL looks in good shape in six House races (a pickup of four, including two open seats) while the GOP is expected to win four (including one open seat).  The other six appear too close to call. But the DFL would need only three others — either from our list or others the party sees as winnable.

And when it comes to other legislative seats in play, the DFL is targeting lots of “E” city seats. Three are in Eagan, which sent three Republicans — Sen. Ted Daley and Reps. Diane Anderson and Doug Wardlow — to the Capitol in 2010. All three Republicans appear vulnerable this time around.

But Eagan isn’t the only suburb where political change might be occurring.

The same is true in both Edina and Eden Prairie, where the DFL hopes to win races not on the MinnPost list. GOP Sen. David Hann and Rep. Keith Downey, now seeking a Senate seat, are in tough races against Laurie McKendry and Melisa Franzen, respectively. And former Republican state Rep. Ron Erhardt, is running strongly, as a DFLer, for the seat Downey vacated.

A big factor in those suburban races appears to be “extremism,” best exemplified by the marriage amendment. Moderate suburban Republicans are troubled that GOP legislators moved the party agenda into the bedroom.

For example, McKendry, who presents herself as a moderate DFLer, has hammered Hann on being “an extremist.” In support of her charge, she points to Hann’s strong support for the marriage amendment, his endorsement of GOP presidential candidate Rick Santorum and his suggestion that Catholic Archbishop John Nienstedt supports “socialism.”

The marriage amendment also could be a factor in legislative districts that include college campuses.

At a Tuesday rally featuring former President Bill Clinton at the University of Minnesota, it was opposition to the amendment — more than the presidential campaign — that seems to stir the emotions of the students.

If opposition to the marriage amendment inspires large student turnouts, there would be significant impact on several key races.

District 14B, for example, includes St.Cloud State University, where GOP incumbent King Banaian is in a very tight race with DFLer Zach Dorholt. In Senate District 24, in the Northfield area, DFLer Kevin Dahle could be boosted over GOP rival Mike Dudley, assuming the amendment inspires students at Carleton and St. Olaf to pay close attention to down-ballot races.

Of course, Election Days are filled with “shoulds,”  “woulds” and “coulds.”

Based on interviews with numerous sources, most of whom agreed to talk only on background, the” big picture” elements of this election cycle include the following:

• President Obama’s coattails aren’t nearly as long as they were in 2008, when DFLers saw their legislative power grow.

• The mood of voters is much more “moderate” than the conservative view in 2010, when the GOP not only took over in the House but also won control in the Senate for the first time in almost a half-century.

In part, that moderating tone is created by the large turnouts that occur in presidential election years. Large turnouts mute the voices of extremists.

• Lack of unified leadership in the GOP Senate caucus is leading to some of Republicans’ Election Day problems. (That divided leadership situation dates to the 2011 fall of Senate Majority Leader Amy Koch, which was followed by the rise of several small GOP factions in the Senate. Recall, it was Koch who received much of the credit for putting together the Senate candidates and campaigns that proved victorious two years ago.) House GOP leaders are much more unified.

• Then, there is “the mom factor.” Moderate women who are running may have a slight advantage, especially in the suburbs. Voters seem to believe that most women won’t spend as much time in partisan showmanship as the men do.

These big-picture developments play out in small ways, too.

For example, in the new House District 5A, which includes such places as Bemidji and Walker, two colorful incumbents — Republican Larry Howes and DFLer John Persell — are squaring off in what most believe will be a close race.

Howes is looking at presidential outcomes to handicap his race. Howes, unlike the majority in his caucus, supports big bonding bills. That gives him some support among blue-collar workers.

On the other hand, Persell has the backing of tribal leaders in a district in which American Indians make up 19 percent of the population.

Back and forth it goes, although most “insiders” interviewed by MinnPost believe Howes will eke out a close win in a district that the MinnPost analysis shows has a DFL history. Races such as the Persell-Howes matchup are being played out across the state, sometimes in confounding ways.

For example, the MinnPost analysis — based on voting practices in the last three elections — shows a heavy DFL lean in the new Senate District 5. But redistricting has put DFL incumbent Tom Saxhaug up against Republican first-term incumbent John Carlson. Despite the three-term Saxhaug typically breezing to victories, even DFLers are calling this race “extremely close.”

This is one of nine contests that DFLers consider “swing races” for control of the Senate. DFLers believe they need to win only two or three of them to regain Senate control. It should be noted that many of the DFL-designated swing races are not among MinnPost’s 12 Senate races.

How do MinnPost’s 12 Senate races shape up?

Again, based on numerous interviews, DFLers appear to be running very well in the following races:

Meantime, the GOP candidates seem to be running well in the following races:

On to the House, where MinnPost has followed 16 competitive races that could decide control.

Rep. Erin Murphy, DFL-St. Paul, was charged with recruiting candidates for her party, and she believes her recruits reflect the new mood of Minnesota voters.

“This isn’t going to be a race where you have a big pendulum swing [as 2010 was],” she said. “Minnesotans are centering. They are tired of gridlock.”

In general, she believes the DFL recruited candidates who reflect that mood.

“We looked for candidates rooted in community over party activism,” she said.

With that as backdrop, here’s how MinnPost’s 16 House races appear to be shaping up:

DFLers are running strong in:

Republicans, meanwhile, are strong in the following races:

Here, too, there are a bunch of races that seem extremely tight:

Understand that none of these races is expected to be a blowout, and money continues to pour into legislative races, at record levels, across the state. You can check out our report on spending by independent groups and party caucuses.  You can also see how much legislative candidates have raised and spent in MinnPost’s 28 featured races here.